If today’s AR/VR investment/merger-and-acquisition dynamics continue, there could be a window of one year to 18 months for corporate and VC “smart money” to do deals with AR/VR leaders at sensible valuations. And if the market begins to take off in late 2020 — potentially driven by Apple, Facebook and others — early stage deal makers could reap the rewards.

Digi-Capital’s AR/VR Analytics Platform and new 360-page Augmented/Virtual Reality Report Q3 2019 tracked over $5.4 billion augmented reality investment and virtual reality investment in the last 12 months to Q2 2019, with Chinese companies raising over 2.5 times the dollars (or RMB) of their North American counterparts. Global deal value, or dollars invested, was up in Q2 2019 over the previous quarter, driven by large, late stage Series C+ Chinese computer vision/AR crossover deals (i.e., not AR/VR pureplays). However, deal volume (or number of deals) and valuations were a different story, offering a significant opportunity to early stage investors and acquirers. 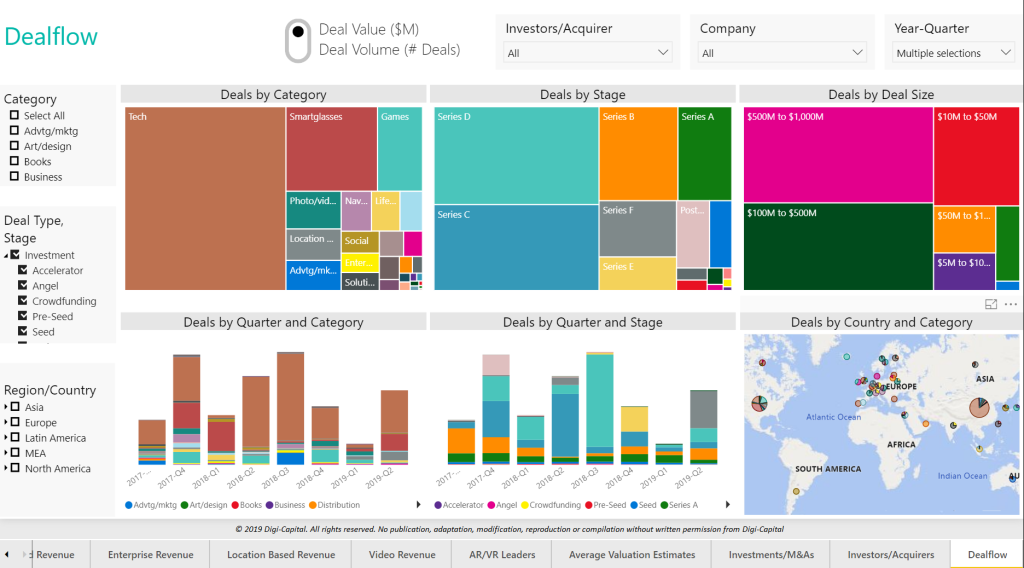 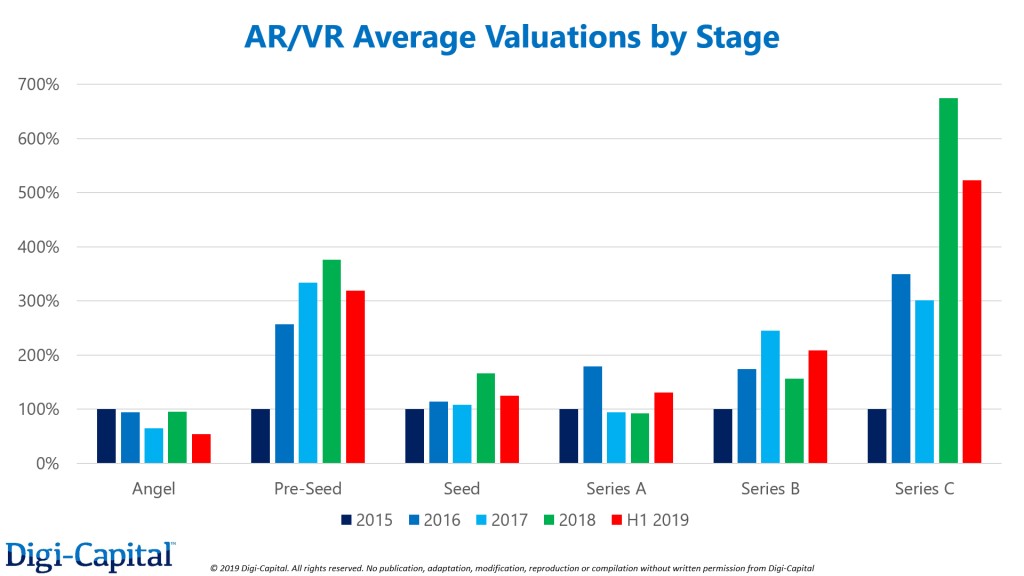 This does not mean that early stage AR/VR companies are being forced into down rounds where valuations are lower than previous rounds, or that there aren’t still robust valuations for solid companies. Rather this drop in the average reflects a shift in the balance of power from early stage AR/VR startups to their investors, with corporate funds and VCs able to drive harder bargains. It’s worth noting that AR/VR startups with the traction to raise Series A and B rounds delivered higher average valuations in the first half of the year compared to last year — so, swings and roundabouts. 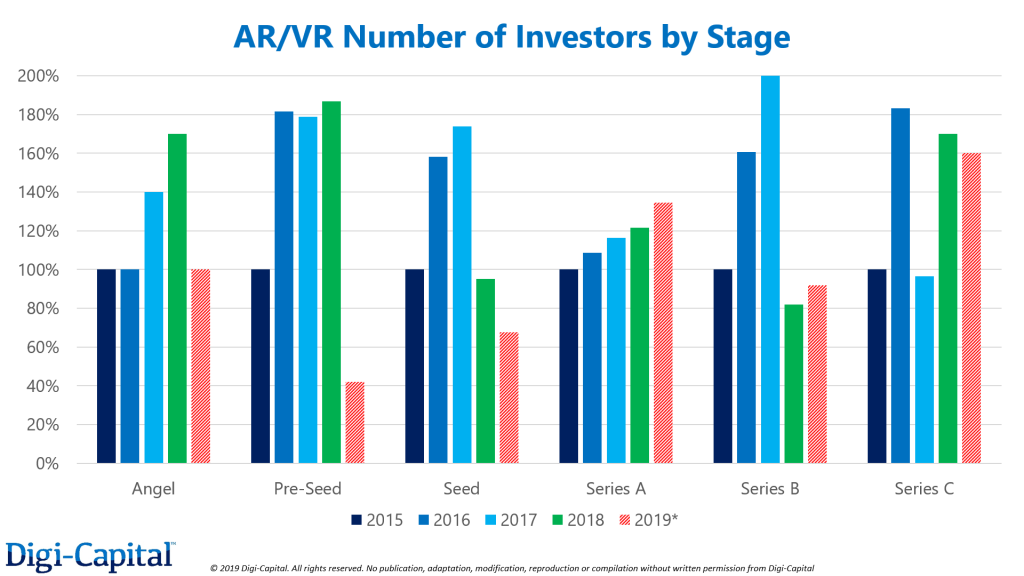 Digi-Capital’s AR/VR Analytics Platform also analyzes thousands of VC and corporate investment funds that have made thousands of AR/VR investments. It is these funds’ changing behavior that looks to be driving lower average early stage valuations.

There were fewer individual corporate and VC investment funds actively investing in early stage AR/VR rounds up to seed in the first half of 2019 compared to 2018 (note: this holds even when extrapolated for the full year). A smaller investor pool this year helps to explain lower average valuations for these stages, with lower competition between fewer investors for fewer closed deals — i.e., fewer investors x fewer deals closed ∝ lower average valuations.

Series A investors don’t seem to be following the same trend, with continuing investor appetite for AR/VR startups with traction. The Series B investor pool also remained similar in size to last year, although down on 2017 levels. Series C+ investors are a relatively small pool to begin with, so the slight decline at those stages could just be due to inherently higher variance. 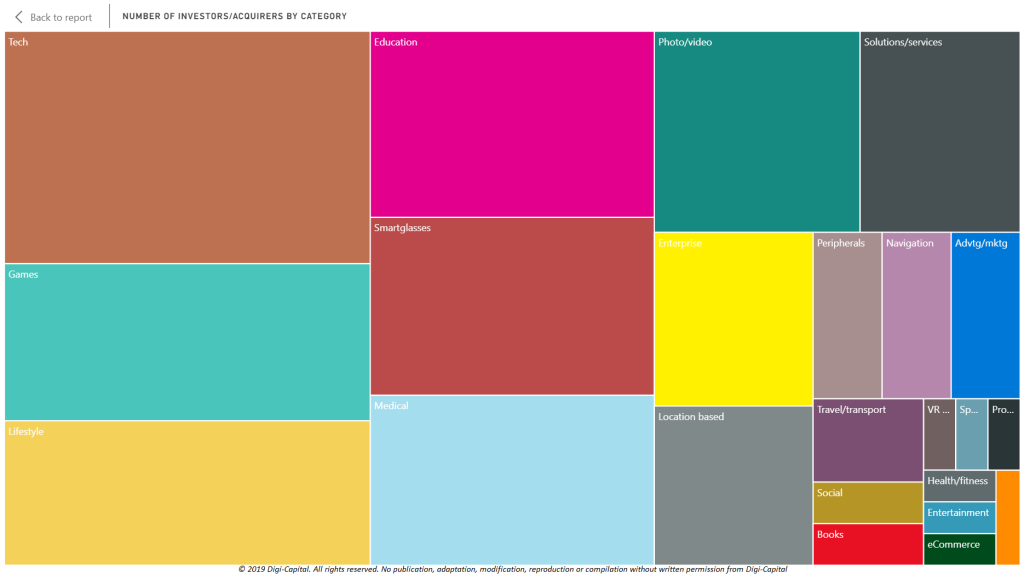 The largest number of VC and corporate investment funds continued to focus on core AR/VR technology startups, as they have for the last few years. As in other early stage markets, some investors manage investment risk by focusing on “picks and shovels” startups that support the ecosystem. These were followed by investors in AR/VR games, smartglasses, education, lifestyle, and medical, as well as fewer investors in 17 other categories.

AR/VR number of acquirers by Category 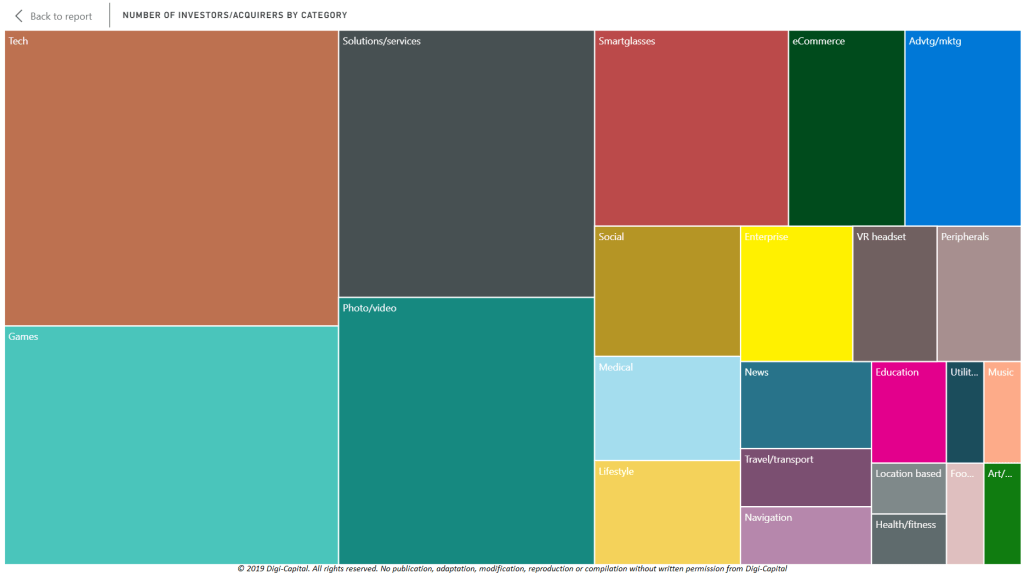 (Note: investment is companies raising funds from VC/strategic investors – i.e., new money into companies. M&A is companies buying other companies or stakes in them – i.e., buying shares from existing shareholders)

AR/VR has seen relatively few M&A deals compared to other tech sectors due to the early stage of the market. While this could change if there is an inflection point next year, there isn’t an obvious catalyst to drive large-scale M&A in the next 12-to-18 months.

There has also been a limited range of acquirers in each AR/VR category, with the largest numbers in core AR/VR technology, games, solutions/services and photo/video (as well as fewer acquirers across 19 other categories). The most active AR/VR acquirers to date include:

Each of the top 10 has a different acquisition focus, although core AR/VR technology acquisitions have been significant for many. As Digi-Capital’s investment banking arm recently completing the sale of an AR startup to a big acquirer has shown, knowing what buyers are looking for and building the right relationships are critical for any exit.

And as always with delivering return on investment, timing is everything.