(Reuters) — Digital currencies such as Facebook’s planned Libra raise serious concerns and must be regulated as tightly as possible to ensure they do not upset the world’s financial system, Group of Seven finance ministers and central bankers said on Thursday.

Finance Minister Bruno Le Maire of France, which holds the rotating presidency of the G7 top world economies, told a news conference the group opposed the idea that companies could have the same privilege as nations in creating means of payment — but without the control and obligations that go with it.

In a summary of the informal G7 talks in Chantilly, north of Paris, the French presidency said the ministers and governors had agreed that “stablecoins and other various new products currently being developed, including projects with global and potentially systemic footprint such as Libra, raise serious regulatory and systemic concerns”.

Governments are starting to worry that big tech companies are encroaching on areas that belong to governments, such as issuing currency. Facebook’s June 18 announcement of Libra heralded an effort to expand beyond social networking and move into e-commerce and global payments.

The G7 are concerned that Facebook’s ambitions for a digital currency might not only weaken their control over monetary and banking policies but also pose security risks.

“A global stablecoin for retail purposes could provide for faster and cheaper remittances, spur competition for payments and thus lower costs, and support greater financial inclusion,” European Central Bank board member Benoit Coeure, the chairman of the taskforce, told the G7 meeting. 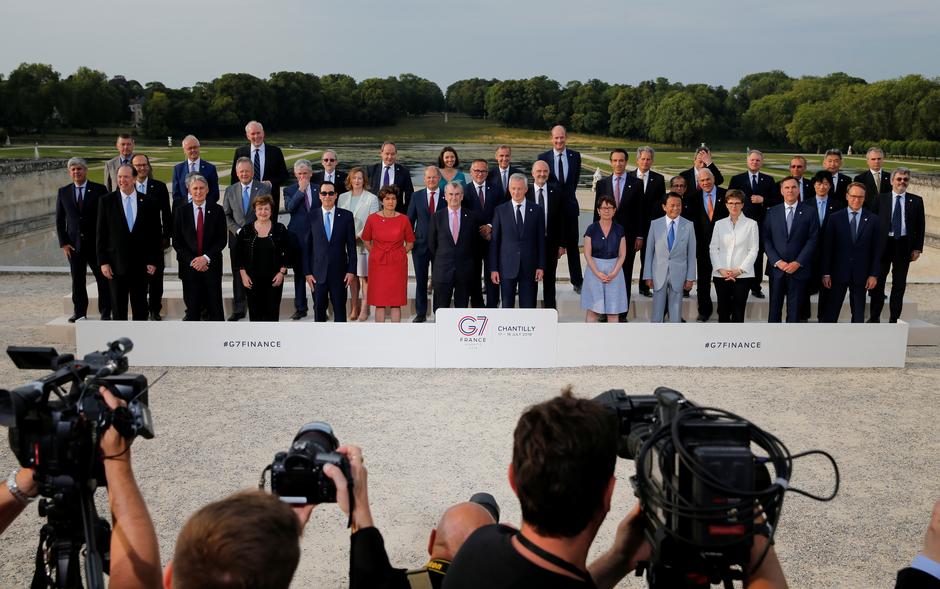 “However … they give rise to a number of risks related to public policy priorities including anti-money laundering and countering the financing of terrorism, consumer and data protection, cyber resilience, fair competition and tax compliance.”

The G7 also agreed that large tech companies such as Google, Amazon, Facebook or Apple can be taxed in the countries in which they make money, even without being physically present there.

They also agreed that there should be a minimum level of tax to discourage countries from competing in a “race to the bottom” to attract business from digital multinationals.

“A minimum level of effective taxation, such as for example the U.S. GILTI regime, would contribute to ensuring that companies pay their fair share of tax,” the chair summary concluded.

Using the GILTI regime could help allay possible U.S. fears that the new rules could discriminate against U.S. companies.

“We’re beginning to develop a framework … We feel very strongly that this should not just be geared at the U.S. digital companies,” U.S. Treasury Secretary Steven Mnuchin told journalists.

An outline of the new regime and its implementation is to be developed by the Organisation for Economic Cooperation and Development (OECD) by the end of the year, so that the details can be agreed by the end of 2020.

Several European countries including France, Italy, Britain and Spain have already introduced their own taxes on digital companies or plan to do so. Washington saw the French levy as discriminating against U.S. companies, and launched a probe that could lead to the imposition of tariffs on French goods.

Le Maire said Paris would keep its levy in place until the new, internationally agreed tax replaced it.