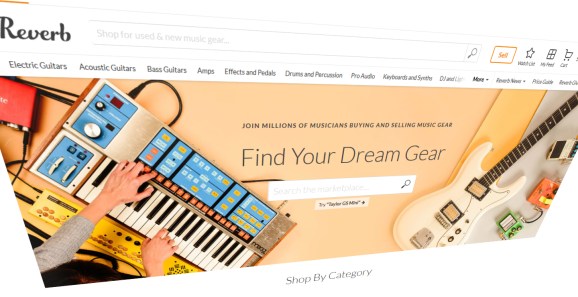 Etsy has announced plans to acquire Reverb, a marketplace for new and used musical instruments, in a cash deal worth approximately $275 million.

New York-based Etsy has made a handful of acquisitions in its 15-year history, but Reverb is the first since it shelled out $32.5 million for AI startup Blackbird back in 2016.

Founded out of Chicago in 2012, Reverb is essentially an eBay for music instruments, where anyone can buy and sell guitars, amps, drums, pedals, keyboards, spare parts, and more.

Reverb had raised nearly $50 million since its inception, with big-name backers including PayPal founder Max Levchin, former Twitter COO Adam Bain, and The Lean Startup author Eric Ries. Etsy, for its part, has been riding the crest of a wave, with its share price doubling over the past year and hitting an all-time high of $73 back in March.

While Etsy is better known as a marketplace for individuals looking to sell their handmade, small-run, or one-off items, Reverb represents an expansion into a new vertical. However, there are clear synergies, insofar as both companies are all about connecting buyers with sellers — with a particular focus on unique or vintage goods.

“As we have said, our M&A strategy looks to put our capital to work in an opportunistic way — finding great businesses at the right value — and we believe Reverb is just that,” said Etsy CFO Rachel Glaser. “Reverb shares our mission, has a nearly identical business model, a strong brand in a large, fragmented market, and healthy growth dynamics.”

Etsy said it plans to continue operating Reverb as a standalone brand and business when the deal closes, which is expected to be later this year. In a separate statement, Reverb founder and CEO David Kalt noted that Etsy was actually part of the reason he started Reverb in the first place.

“Etsy forged a path and gave me the confidence to start Reverb when I saw the need for a musician’s marketplace six years ago,” he said. “Reverb has always found inspiration in Etsy. Since our inception, we’ve admired their unwavering support of creative businesses and entrepreneurs, their values-driven approach to business, and their dedication to keeping commerce human — not to mention their appreciation for all things vintage.”