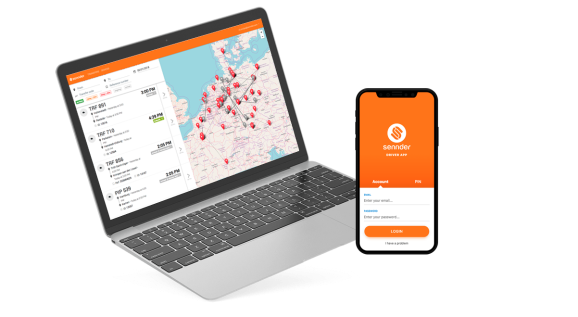 Sennder, a platform and marketplace that connects commercial shippers with smaller freight carriers, has raised $70 million in a series C round of funding led by Lakestar, with participation from Accel, HV Holtzbrinck Ventures, Project A, Siemens’ Next47, H14, and Scania Growth Capital.

Founded out of Berlin in 2016, Sennder touts itself as a “digital road freight forwarder,” with a platform that sets out to modernize and automate an industry that has traditionally relied on paper, phone calls, and faxes. The platform constitutes various tools, including a mobile app that lets drivers view and accept loads, fleet management tools for trucking companies, and logistics management smarts for the shippers.

Through Sennder, users can view real-time arrival information about their goods, including the precise location of a shipment, and receive automatic notifications of delays due to traffic or other unforeseen circumstances.

For now, Sennder is focused squarely on the European market, where it says the road freight industry is worth around $400 billion, but the company represents part of a global push to digitize a historically inefficient industry.

The global truck transportation market is pegged at $1.5 trillion, a mouthwatering figure that has led to the emergence of numerous regional VC-backed startups looking to grab their piece of the pie. Earlier this year, Los Angeles-based Next Trucking raised $97 million to streamline road freight transport, while San Francisco’s KeepTruckin raised $149 million for its automated fleet management platform from big-name backers that include Alphabet’s GV. In India, Rivigo recently raised $65 million and Blackbuck nabbed $150 million for similar propositions.

Elsewhere, Uber is continuing to invest in its trucking business — known as Uber Freight — which recently expanded to Europe, while countless others are developing automation technologies to improve the road freight business. Volvo recently announced a partnership with ferry and logistics giant DFDS, which will use Volvo’s autonomous trucks to transport goods between a port and a local logistics hub.

Sennder has now raised a total of $100 million this year, following an Accel-led $30 million series B round a few months back — but the company isn’t divulging how much it has raised since its inception. With its fresh cash injection, Sennder plans to expand across new markets and “develop its technology and operational capabilities,” according to a statement.

Lakestar is a notable addition to this series C round, as its portfolio companies include the likes of Spotify and Airbnb — the first having recently gone public, with the second soon to follow suit.

“The investments by venture capital firms Lakestar and Accel show that we have identified a massive challenge and its solution that will play a vital role for the future of the European logistic markets,” said Sennder cofounder Nicolaus Schefenacker.