Cars that can park themselves aren’t anything out of the ordinary, but Bosch and Daimler claim they’ve accomplished something of a world’s first with their system. The two companies today jointly announced that the Stuttgart regional administrative authority and Baden-Württemberg state transportation ministry, following an assessment by German certification authority TÜV Rheinland, have approved their smartphone-controlled automated valet for use in the Mercedes-Benz Museum parking garage in Stuttgart.

“Automated valet parking is the world’s first infrastructure-based solution for a fully automated parking service to have been approved by the authorities,” said Dr. Markus Heyn, member of the Robert Bosch board of management. “Driverless driving and parking are important building blocks for tomorrow’s mobility. The automated parking system shows just how far we have already progressed along this development path.”

As Bosch and Daimler explained in a joint press release, there’s not yet a codified process for approving level 4 automated driving functions, or those capable of parking with limited human oversight as defined by the Society of Automotive Engineers. Establishing a framework necessitated close collaboration with Stuttgart, Baden-Württemberg, and TÜV Rheinland “from the outset,” with the goal of evaluating and testing how Bosch’s and Daimler’s driverless system detects pedestrians and other cars in its path, how quickly it stops when it encounters an obstacle, and how its components communicate with each other securely. 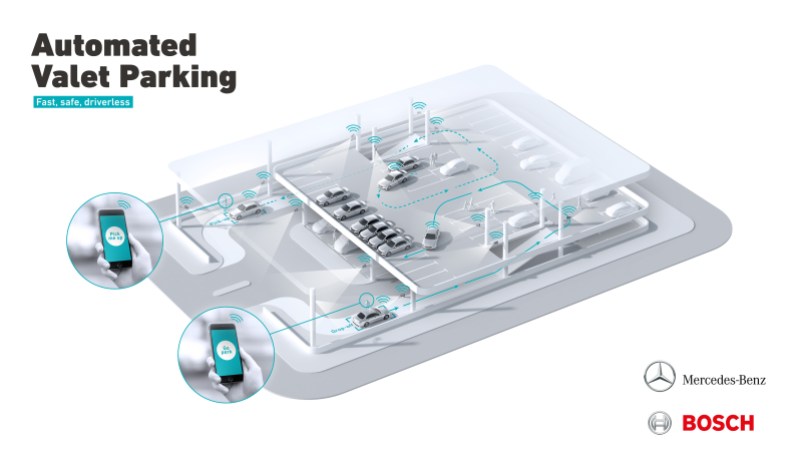 The autonomous parking valet leans on an intelligent infrastructure supplied by Bosch and Mercedes-Benz, which consists of sensors that monitor driving corridors and their surroundings to guide compatible vehicles to and from assigned spaces. Complementary in-car technology switches on turquoise lighting and converts commands into driving maneuvers, enabling cars to drive themselves up and down ramps and spot potential hazards.

“This approval from the Baden-Württemberg authorities sets a precedent for obtaining approval in the future for the parking service in parking garages around the world,” said Daimler head of drive technologies Dr. Michael Hafner. “As a pioneer in automated driving, our project paves the way for automated valet parking to go into mass production in the future.” 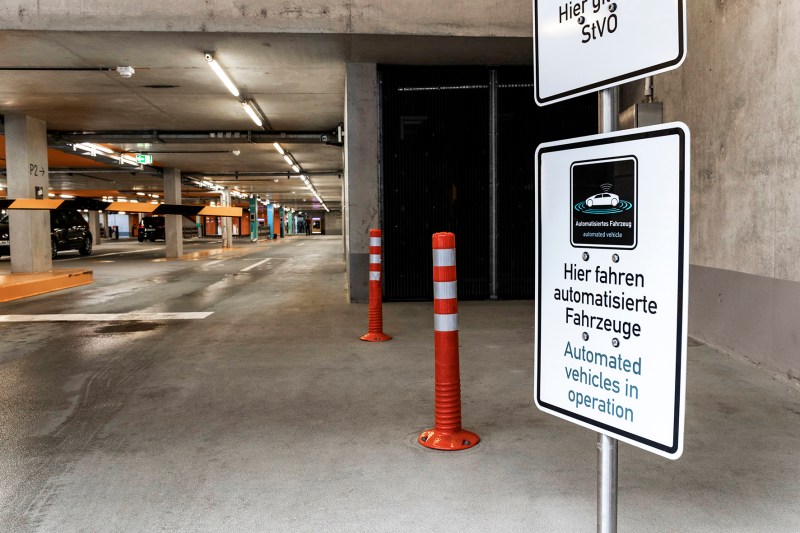 This latest milestone is the culmination of roughly four years of work. Bosch and Daimler began developing fully automated driverless parking in 2015, and in 2017, their pilot in the Stuttgart garage became capable of automated parking in real conditions. A year later, the two companies began allowing Mercedes-Benz Museum visitors to use the parking service live, accompanied by trained safety personnel.

Bosch and Daimler took the wraps off of their self-driving partnership in 2017, with the goal of getting self-driving cars on roads in the next decade. It’s a symbiotic relationship: Bosch supplies components such as sensors, actuators, and control units, and Daimler provides development vehicles and test facilities.

Last year, the two reaffirmed with a memorandum of understanding that in the second half of 2019, they’ll pilot “highly” and “fully” autonomous vehicles as part of an on-demand ride-hailing service revealed in July. Assuming all goes smoothly, Mercedes-Benz S-Class sedans capable of level 4/level 5 driving will offer service to “selected user communities” in the San Carlos/Stevens Creek corridor between downtown and west San Jose.

Bosch has made its autonomous driving ambitions abundantly clear this year. It created a new Connected Mobility Services division staffed with more than 600 employees, acquired B2B ridesharing startup Splitting Fares, and partnered with TomTom on mapping systems that will help vehicles see the road ahead.

Daimler, for its part, in June obtained a permit from the Chinese government allowing it to test self-driving cars powered by Baidu’s Apollo platform on public roads in Beijing. (It already has permits for testing self-driving cars in the U.S. and Germany.)