Netflix has officially unveiled a cheaper mobile-only subscription tier in India, after a series of tests across a handful of Asian markets that started last year. 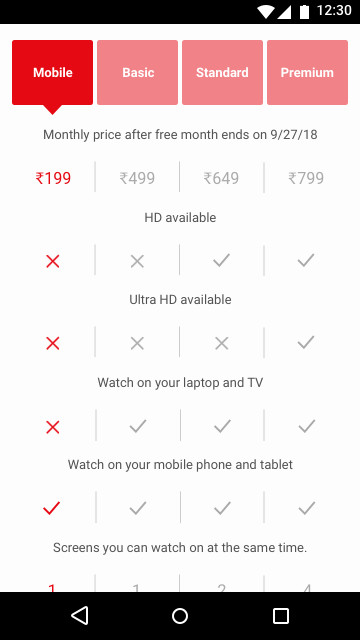 Netflix confirmed the mobile-only plan’s imminent launch during its Q2 earnings last week, citing local market conditions as a factor in its decision to target India first. “After several months of testing, we’ve decided to roll out a lower-priced mobile-screen plan in India to complement our existing plans,” the company said. “We believe this plan will be an effective way to introduce a larger number of people in India to Netflix and to further expand our business in a market where Pay TV ARPU (average revenue per user) is low (below $5).”

Though Netflix has tested this cheaper plan in other Asian markets, including Malaysia, it hasn’t confirmed any plans to continue the rollout elsewhere. “We will continue to learn more after launch of this plan,” the company said.

The timing of the Indian launch is notable, coming a week after Netflix reported slow or negative growth in memberships globally. The Los Gatos-based company revealed a global increase of 2.7 million members, roughly half its growth for the same period last year and markedly less than the 5 million it had forecast. What’s perhaps more interesting, however, is that Netflix experienced its first ever net streaming loss in the U.S., dropping around 130,000 members. One of the reasons for this was that Netflix raised its U.S. subscription prices by up to 18% earlier this year, a move it mirrored in other markets, including Europe, where some prices rose by as much as 20%.

“Our missed forecast was across all regions, but slightly more so in regions with price increases,” the company said.

To combat its membership declines, Netflix could well explore a lower-grade plan in other markets. Its net loss in the U.S. was relatively small in the grand scheme of things, bit it’s a trend the company will be watching carefully — price hikes often make people assess whether they really need a service, relative to how much they use it. Certain users, whether commuters or parents who only want to use Netflix to placate kids on long journeys, may decide that the cheapest $9 plan is just too much. But they’d perhaps pay $5 to access the service through a phone or tablet.

A recent eMarketer report suggested U.S. adults now spend more time on mobile phones than watching television. According to Google, more than 70% of YouTube watch time is now on mobile, while a separate report found that YouTube is responsible for nearly 40% of all mobile internet traffic globally. These numbers are telling, but they may not paint the full picture — there is a world of difference between watching short-form videos on the train to work and sitting down to binge-watch Stranger Things with friends. For the latter, many prefer a big-screen experience.

Indeed, Netflix previously revealed that while most signups happen on mobile phones or computers, 70% of its streaming hours emanate from TVs. 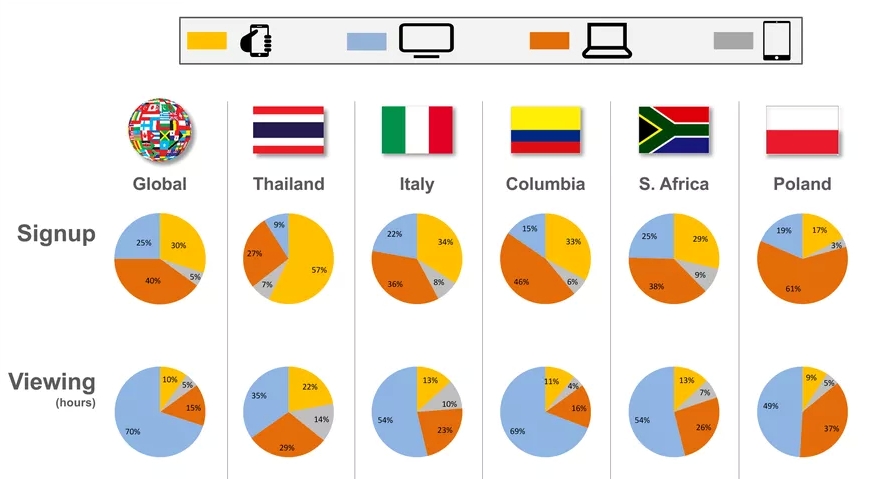 Above: Netflix by Country

Similarly, Google launched its live YouTube TV offering a couple of years back as a mobile-first service but later embraced the big screen with dedicated apps when it discovered that more than half of all YouTube TV viewing hours were via Chromecast on TVs.

The point is, while mobile phones are popular for consuming content, they are not necessarily preferred for “lean-back” Netflix-style viewing. But individual markets vary — Netflix elected to launch its new cheaper plan in India specifically because the country has a particularly high mobile-to-TV viewing ratio among its users.

“Our members in India watch more on their mobiles than members anywhere else in the world — and they love to download our shows and films,” noted Ajay Arora, director of product innovation at Netflix. “We believe this new plan will make Netflix even more accessible and better suit people who like to watch on their smartphones and tablets — both on the go and at home.”

That said, if roughly 15% of Netflix viewing hours globally take place on mobile phones or tablets, and with Disney is gearing up to launch a $7 streaming service later this year, Netflix could soon find itself offering cheaper, mobile-focused plans in more markets.