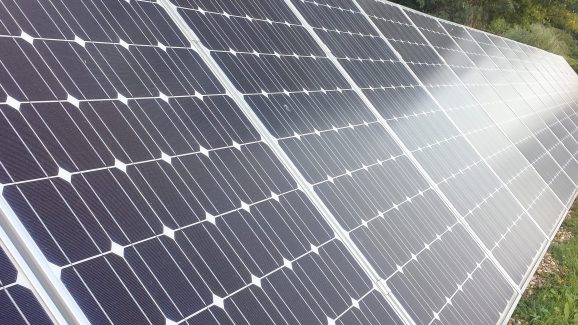 Apple has spent nearly a decade dramatically expanding its use of solar energy across the United States, and the effort has paid off: The Solar Energy Industries Association (SEIA) reports today that Apple now has the most installed solar capacity of any U.S. company, followed by Amazon, as both companies vaulted over prior industry leaders Target and Walmart. But there’s a catch.

In the Solar Means Business 2017 report, Apple ranked fourth behind both of the top brick-and-mortar retailers and Prologis, an industrial warehouse company, while Amazon ranked tenth, below such retailers as Kohls, Costco, Ikea, and Macy’s. The SEIA’s just-published 2018 report showed Apple and Amazon surging as measured by megawatts of installed solar capacity, with Apple at 393.3MW to Amazon’s 329.8MW. Target jumped from 203.5MW in 2017 to 229.7MW in 2018, and Walmart from 149.4MW to 208.9MW, but the year-over-year gains from their digital-first competitors were comparatively huge.

SEIA notes that the growth in solar energy capacity has been a result of more affordable solar hardware and better financing options. More than half of all corporate solar hardware has been installed over the last three years, now with enough annual electrical capacity to power 1.4 million homes, or offset 200 million miles of truck deliveries.