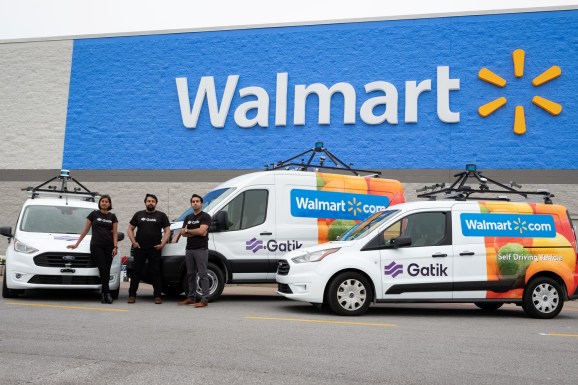 Retail giant Walmart today revealed that it has launched a pilot with Gatik — a two-year-old startup developing an autonomous vehicle stack for B2B short-haul logistics — to ferry customer orders between select store locations in Bentonville, Arkansas. The announcement comes months after the Arkansas legislature approved a Walmart-backed proposal allowing companies to test self-driving vehicles on public roads and highways.

The collaboration marks the latest in a series of driverless delivery efforts kicked off by Walmart in recent years. In January, the company worked with Udelv to pilot autonomous deliveries in select stores, and in November Walmart teamed up with Ford and Postmates to test self-driving grocery delivery in the Miami area. More recently, it partnered with Waymo to provide customers with rides to and from stores to pick up online orders.

“We’re always out to help our customers, and that means helping them save time and money,” wrote Walmart senior vice president of digital operations Tom Ward. “So we’re using our position of strength to reinvent the shopping experience to take us, and busy families, well into the future.”

According to the plan approved by the Arkansas Highway Commissioner, Gatik’s fleet of retrofitted Ford Transit vans will this week begin to transport items from a warehouse to neighborhood market stores along a two-mile route (or five-mile one-way route) in Bentonville. Each van will make up to ten runs a day during daylight, with human safety operators behind the wheel as backups.

Walmart says it expects to learn more about the logistics of adding autonomous vehicles to its delivery ecosystem and the operation process changes they’ll eventually facilitate, and about opportunities to incorporate the vehicles into other parts of its business.

Gatik‘s platform taps level 4 autonomous light commercial vehicles — i.e., vehicles capable of operating with limited human input and oversight in specific conditions and locations (as defined by the Society of Automotive Engineers) — to fulfill on-demand and scheduled deliveries up to a distance of 200 miles. Its vans (which the company has been testing on public roads in California since Q1 2018) and orchestration software ensure goods are transported up to 50% less expensively in city environments.

The Palo Alto, California-based startup (which has offices in Toronto) is the brainchild of Carnegie Mellon graduate and CEO Gautam Narang and CTO Arjun Narang, brothers and cofounders who have worked together in the field of robotics, AI, and machine learning for over 10 years. They, Gatik chief engineer Apeksha Kumavat, and the rest of the company’s 15-to-20-person workforce hail largely from Carnegie Mellon, Ford, and Honda’s self-driving research units; from robotics firm OTSAW Digital; and from teams that competed in Defense Advanced Research Projects Agency challenges and the Google X Prize for moon rover technology.

“Our team is made up of the very best minds from academia and industry,” said Kumavat in a previous statement. “Collectively, we have made critical contributions and technological breakthroughs in robotics and machine learning that have enabled us to build and launch an autonomous service that is filling a gap in the market where the vehicles are on the road (not on the sidewalk), operating on city roads, and traveling longer distances (typically up to 100 miles), and with a much higher payload.”