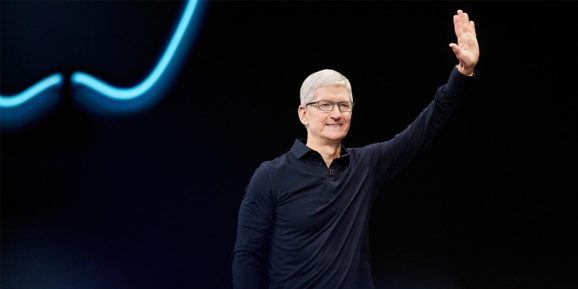 Today’s Q&A comes after Apple disclosed largely expected results, including a 1% improvement in overall revenues — enough to just barely qualify as a record quarter — with continued declines in iPhone sales, offset by growth in Services and Wearables revenues.

Cook opened the call by discussing the company’s return to growth in the quarter, led by improving Wearable and Services sales, which are collectively approaching the size of a Fortune 50 company. Services are looking strong: Apple is now aggregating TV content from numerous providers, and the company’s Apple TV Channel service is poised to continue growing as customers respond well to over-the-top TV services. Apple Pay is also growing — expanding into transit systems and ride-hailing providers and moving into more countries. Apple Card will begin to roll out in August.

Apple Watch demand continues to be excellent, as is demand for AirPods, making the Wearable business very strong. This was the third consecutive quarter of growth for the iPad, buoyed by sales of the new iPad Air and iPad mini. And the Mac grew due to MacBook Pro and MacBook Air introductions, with a “killer” $999 MacBook Air. Apple’s also looking forward to debuting the most powerful Mac ever, the Mac Pro (with Pro Display XDR) in the Fall.

Sales in Greater China returned to growth in constant currency. The iPhone business saw improvements in year-over-year numbers, thanks in part to consumer responses to trade-in deals, as well as government incentives. App Store sales have also been strong.

The Intel smartphone modem acquisition is in furtherance of Apple’s strategy, enunciated under Steve Jobs, to own and control the key technologies it uses in its products. Apple plans to welcome the Intel engineering team into the company, as the largest collection of people and second-largest acquisition by dollars, in the company’s history.

As debuted during WWDC, Apple’s new operating systems will bring plenty of new features to iPhones, iPads, Apple TVs, Apple Watches, and Macs. In particular, macOS Catalina’s new Catalyst feature will enable iPad apps to arrive for the Mac ecosystem, and the company expects many of them to be available when Catalina ships in the fall. The company is also enthusiastic about AR technologies introduced at WWDC, including ARKit 3 and Reality Composer.

Apple CFO Luca Maestri noted that the company returned to growth despite challenging exchange rates, and all geographic segments grew in constant currency. The small percentage basis growth seen during this quarter was an improvement over declines earlier in the year, and records were set in a number of countries. Apple expects continued improvements in revenue for the next quarter despite $1 billion in currency headwinds.

The latest survey of consumers shows U.S. iPhone customer satisfaction at 99% for the iPhone XR, iPhone XS, and iPhone XS Max combined. Additionally, the Wearables business is now the size of a Fortune 200 company on its own.

Services revenue grew by double digits across all territories and now represents over 21% of the company’s revenues. There are now over 420 million paid subscriptions, and the company believes it will surpass the 500 million mark in 2020, without depending more than 0.25% on any single app for the resultant revenue.

While Mac numbers were up a little, that was notably during a time of continued declines for the PC industry as a whole, and nearly half of buyers were new to the Mac platform. The iPad was up a bit and has a 94% customer satisfaction rating, with continued interest from a strong majority of business buyers interested in buying tablets; 60% of the biggest banks are supporting the iPad internally and are developing software to radically cut customer onboarding — in one case from an hour down to 12 minutes.

What gives you the confidence in a strong September quarter? Maestri says there will likely be continued strong growth in non-iPhone categories, including Wearables and Services.

Any additional detail on linearity, specifically app deterioration in China in June? Cook adds that the company looks at linearity in detail but doesn’t say what it has concluded.

What’s happening in Services? Could this reaccelerate? Maestri says the installed base continues to grow in every geography and all major product categories, which is important for the Services business. There are two interesting factors: the App Store had sequential acceleration of growth, including in China, where game titles were approved by the government, but AppleCare growth decelerated due to expected factors, including real strength from additional AppleCare retailers last year that might be hard to match. Subscriptions are on the uptick, new services are launching soon, and between Apple Card, Apple Arcade, and Apple TV+, there will be continued momentum in Services.

Maestri adds that Apple News+ is available right now, and TV Channels as well. The new services will have different trial periods, and the roads to monetization will take time.

How successful was the iPhone trade-in program? Cook says it was quite successful in retail, and trade-in as a percentage of total sales is significant, with financing a key element of it. Between retail and online, it collectively led to growth in June, he says. The company is advocating the use of trade-ins more widely with carrier partners and retail partners.

Cook adds in response to a separate question that customers are holding onto phones longer, but Apple is still expanding its customer base. In addition to customers who buy new phones, and customers who keep using old phones, there’s also the secondary (resale/refurb) market as a way to reach customers Apple doesn’t reach in another way.

Three to five years from now, will Services still be tethered to the iPhone’s growth, or be separate from the hardware install base? Cook says there are elements today not tethered to the iPhone, such as products that work with Android or Apple TV. Apple has the strongest hardware portfolio ever, with new products on the way, and has loyal customers and switchers supporting the company. On the market side, there are emerging markets with low penetration, but there’s been some bounce back in India and Brazil; there are new opportunities with things like augmented reality.

What’s the long-term situation on China, given tariff situations and trade and manufacturing? Cook says the vast majority of Apple products are “kind of made everywhere,” including content from the U.S., Korea, Japan, China, and the EU. That’s the nature of a global supply chain and will continue to be the case in the future. But Apple is currently investing in a way to keep making the Mac Pro in the United States, he suggests — a surprise, given that the company reportedly had major problems making the prior version here.