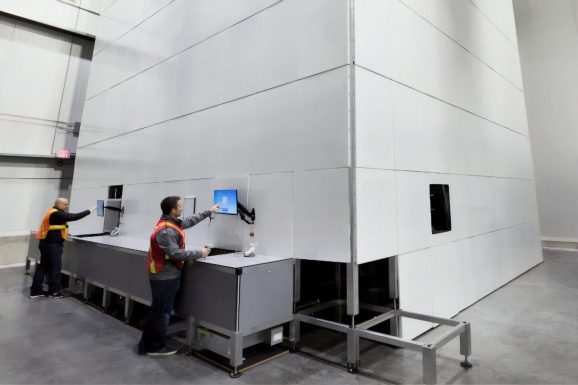 One of Attabotics' in-warehouse structures.

Attabotics, a robotics supply chain company headquartered in Calgary, Alberta, today announced it has secured $25 million in a series B funding round led by financial and strategic investors Coatue, Comcast Ventures, and Honeywell, alongside returning backers Forerunner Ventures and Werklund Growth Fund. The fresh capital brings the company’s total raised to $32.7 million following grants from the Opportunity Calgary Investment Fund, and CEO and CTO Scott Gravelle says the funds will enable Attabotics to expand its team, scale its manufacturing operations, and develop new technologies.

“We applied the three-dimensional structure of ant colonies into a fulfillment system, built for modern commerce, that is flexible, scalable, and accelerates the shipping and delivery process,” said Gravelle, who cofounded Attabotics with Jacques LaPointe, Rob Cowley, and Tony Woolf in 2015. “Commerce is at a crossroads, and in order for retailers and brands of all types and sizes to thrive, they need to adapt and take advantage of new technologies to effectively meet consumers’ growing demands.”

Attabotics’ novel fulfillment automation technology condenses rows and aisles of warehouse shelves into single, vertical storage structures. Orchestrated fleets of robotic shuttles within these structures move horizontally and vertically along the X, Y, and Z axes, retrieving goods and delivering them to the perimeter, where workers pick, pack, and ship them.

The company claims its modular all-in-one supply chain product can reduce a retailer’s required warehouse needs by 85% while accelerating shipping. Furthermore, it says its technology has already been adopted and deployed by unnamed “major” brands and retailers in the U.S. and Canada across apparel, food, beverage, and home goods verticals.

“Supply chain efficiency, particularly relative to improving fulfillment speed and capabilities, is a critical (costly) strategic issue for brands and retailers to address as they struggle to meet the pressures of today’s competitive consumer environment while staying profitable,” said Forerunner Ventures’ Eurie Kim. “Attabotics provides retailers of all sizes with an innovative back-end system that not only enables them to meet the ever-increasing bar for faster delivery, but also allows them to manage vast inventory assortment and seamless returns, all while allowing the business to focus on its most important job — delighting customers.”

Attabotics’ technology isn’t unlike that of Israel-based CommonSense Robotics, which also takes a hybrid approach to fulfillment. CommonSense’s machines — managed by software that breaks orders into tasks and delegates those tasks autonomously — bring items awaiting shipment in totes to teams of employees, who pack individual orders while other robots move packaged orders to dispatch. The company’s first fulfillment center (which it claims is one of the world’s smallest) measures just 6,000 square feet in total, and its second is 18,000 square feet with an average clearance height of 11 feet.

Of course, Attabotics and CommonSense are far from the only companies bringing micro-fulfillment tech to retail.

Takeoff Technologies’ platform, which works out of pharmacies, convenience stores, and quick-service restaurants, doubles as a pick-up station, complete with lockers for easy access. And commerce giant Walmart partnered with Alert Innovation in August 2018 to deploy AlphaBot, an autonomous fulfillment system capable of picking and transporting the “vast majority” of grocery items.

That’s not to mention the more than half-dozen startups deploying robots in store aisles. California company InVia Robotics raised $20 million this past summer to bring subscription-based robotics to ecommerce warehouses. In the U.K., supermarket chain Ocado recently took the wraps off a picking and packing robot that can grasp fragile objects without breaking them. And French startup Exotec’s AI system Skypod taps robots capable of moving in three dimensions.