Google has opened up an auction to allow alternative search engines to become the default providers on mobile devices in Europe.

Beginning in early 2020, anyone setting up a new Android device in the European Economic Area (EEA) will see a choice screen, where they will be asked to select which search engine they wish to use as a default.

Four options will be available, including Google, and these will vary from country to country, depending on which companies apply for inclusion.

The move comes a year after Google was hit with a record $5 billion fine by EU antitrust regulators for the way it bundled its services on Android, with claims that Google forced manufacturers to preinstall certain Google apps to gain access to others. Google has long argued that manufacturers are free to use Android as they wish, given that the operating system is released under an open source license. But to access core services such as YouTube and Google Maps, they have also had to preinstall a broader array of Google apps, including Chrome as the default browser and Google Search as the default search engine.

In response to the fine, Google announced a complete overhaul of its Android licensing model in Europe. The company elected to separate Google Search and Chrome from its other suite of apps and to offer different licenses for each “bundle” — which it would charge for. This meant that phone and tablet manufacturers could create their own “forked” versions of Android and cherry-pick which Google apps they wanted to use — for a fee. Moreover, this move enabled device makers to retain access to Google’s version of Android, replete with the the Play Store, and to choose which search engines or browsers they wanted to offer as default, albeit by paying a separate license fee.

As part of measures to placate European regulators, earlier this year Google started suggesting alternative browser and search engines for Android users, though these were in addition to Chrome and Google Search, which were still set as default. 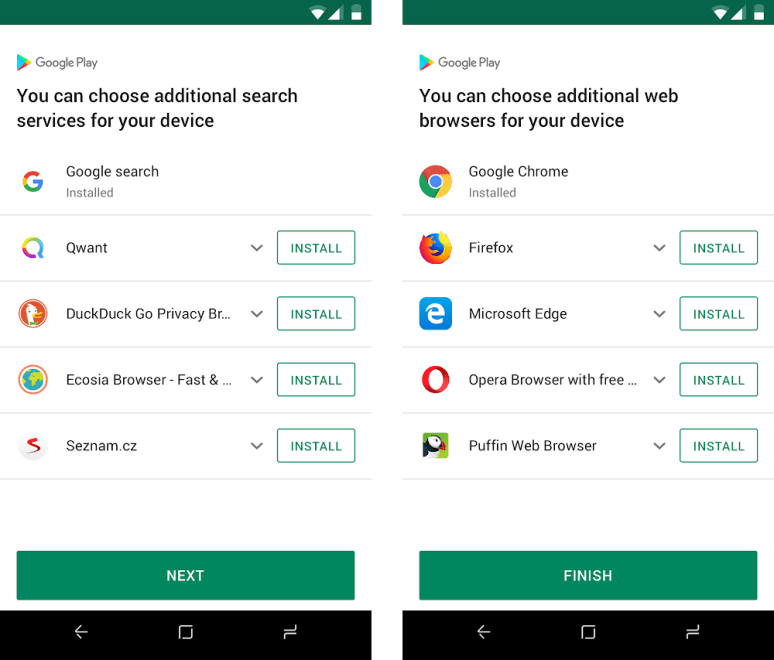 Now Google is offering rival search engines the chance to be the default option on Android.

It’s worth noting that companies that become part of the new choice screen are still not guaranteed to be users’ first choice. But for every user who does choose their browser as the default, the selected company will pay Google an agreed-upon sum. As part of the bidding process, the company must stipulate how much they are willing to pay beyond a minimum threshold set by Google. This figure will likely not be made public.

In short, the three highest bidders during the auction process will effectively vie to become the default search provider on Android, a selection that will apply to Chrome (if it’s installed) and the search box on the home screen. Moreover, the choice screen will only be displayed on devices where the manufacturer has preinstalled the Google Search app. If a phonemaker has inked an exclusive deal with another search provider, no such options will be provided during setup.

The reality is that it’s already possible for any Android user to change their default search provider manually on their device at any time, and it’s perhaps fair to say that anyone who cares enough about sidestepping Google’s search business has already done so.

Given Google’s prominence in the internet search realm, there is every likelihood that a large portion of users will just select Google when setting up their phones and tablets for the first time anyway. But being presented with the option during setup may be enough to encourage some users to try something different. It’s also worth stressing that users will be able to change back to Google at any time, so even if they do choose Microsoft’s Bing during setup, they could switch to Google 10 minutes later, and Microsoft would still have to pay for that initial default selection.

“As always, people can continue to customize and personalize their devices at any time after set up,” noted Google product manager director Paul Gennai. “This includes selecting which apps to download, changing how apps are arranged on the screen, and switching the default search provider in apps like Google Chrome.”

However, not all search companies are ecstatic at the prospect of entering into a bidding war. Ecosia, the Berlin-based not-for-profit search engine that plants trees with 80% of its surplus income, called this an affront to the EU’s ruling last year.

“This is really disappointing news — Ecosia is a not-for-profit search engine, and we use our revenue to plant trees in areas affected by deforestation or desertification, not to get into bidding wars,” noted Ecosia CEO Christian Kroll. “If we choose to enter an auction and pay Google for the privilege of being a search engine option on Android, this will potentially be at the expense of millions of trees we could otherwise have planted. The EU’s anti-competition ruling is clear — Google has too much power, the decision over which search engines are able to use Android, which is the second largest operating system in the world, shouldn’t be up to Google. It should be up to their users.”

Cliqz, a browser that sports its own built-in search engine, also weighed in, saying that this move “obstructs the market for competitors.”

“The audacity with which Google disregards the EU’s clear political will astonishes me again and again,” said Cliqz CEO Dr. Marc Al-Hames. “Google wants to show who’s in charge. And this is only possible because there are still no competitive European providers in the field of digital infrastructure. It just shows that how much we depend on the big tech groups from the U.S. and that we allowed them to make Europe their playground. If the highest bidder wins the contract, and not the best search engine, then the user is the biggest loser.”

Companies wishing to be included on the default search engine choice screen have until September 13, 2019 to submit their bids, and Google will confirm which options will appear in each country on October 31. These will start showing up on new or factory-reset devices in January, 2020 for a 12-month period, after which Google will repeat the auction process again for each subsequent calendar year.

*This article was updated with comment from Ecosia and Cliqz.