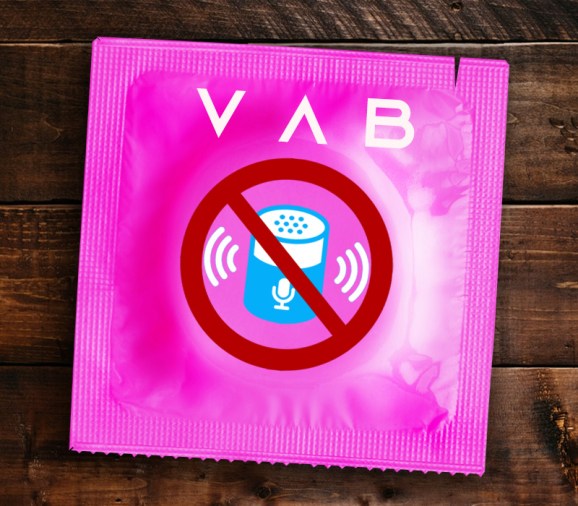 Camsoda is launching its Virtual Assistant Blocker, which is like a condom for Amazon Alexa, giving couples privacy when they’re having sex so voice assistants like Alexa won’t record any sounds they make.

Camsoda has been specializing in gimmicky sex tech, based on the notion that young folks are into both sex and technology. For instance, it recently launched DerbyCast, a way for women to enjoy the Kentucky Derby with the Lovense Lush sex toy, which buzzed if your horse was winning the race.

A recent report alleged that sounds of lovemaking are among the noises that can trigger Alexa-activated Echo speakers, enabling other humans (particularly Amazon contractors hired to listen to the quality of the voice recognition) to listen in while people are having sex.

To better protect users and provide them with privacy, CamSoda is announcing a line of “condoms” that people can place over their Alexa device while they are having sex. While the condom is over the Alexa device it will temporarily mute communication between users and their Alexa, allowing them to make love privately and discreetly without the threat of someone listening.

“The rise of AI-powered virtual assistants poses a threat to our privacy. While the always-on, always-listening devices that we use throughout our daily lives are convenient, they come at a price. When we talk to them, who is really listening? There has been a growing concern that there are people on the other end of our Alexa [devices], recording our conversations and listening in to them,” said Daryn Parker, vice president at CamSoda, in a statement. “Here at CamSoda, we value the privacy of our users and want to better protect them from prying eyes and ears — especially while they are having sex. With the rollout of our new condom line for Alexa-activated Echo speakers, people can ‘wrap it up’ in more ways than one and rest assured that no one is listening in on their lovemaking.”