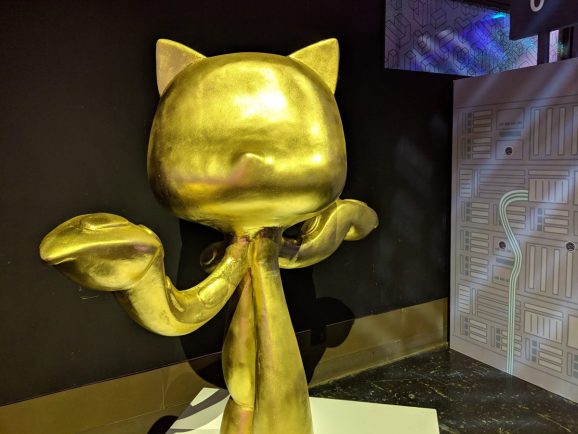 A golden GitHub octocat made in honor of GitHub's 10th anniversary

Microsoft’s GitHub Actions for workflow automation from the beginning of an idea to production got an upgrade today that brings CI/CD to teams building and sharing code. Continuous integration and continuous delivery or CI/CD is a way for developers working on the same project to merge and integrate changes into a code base without conflict.

GitHub also announced today its code repository is now used by 40 million developers worldwide, up from 31 million in fall 2018 and 24 million in 2017.

The latest version of GitHub Actions in beta extends support to programming languages and frameworks like C/C++, Ruby, PHP, and Python. GitHub first introduced Actions in developer beta at GitHub Universe in fall 2018 with support for Java and .NET projects.

“The way that the initial launch for Actions worked was anything that you can basically run on Linux in a container was supported, OK? Now, we are broadening that support to virtually any programming language, because you can run on any of the big platforms, from Linux, Linux, containers, Windows, and then macOS,” GitHub head of product design Max Schoening told VentureBeat in a phone interview.

At launch, GitHub Actions was able to run on Linux in a container but the latest version also works on Windows and macOS computers and actions can now be written in JavaScript. GitHub Actions has been used thus far by tens of thousands of developers, Schoening said.

To create CI/CD compatible with a great range of programming languages and clouds, GitHub partnered with DevOps platforms with CI services like CircleCI and LaunchDarkly. The news comes a day after CircleCI made its services available to Microsoft programmers for the first time.

Live logs with real-time feedback and the ability to share a link to specific lines in a log are part of the update. Matrix builds for testing multiple apps at once will also be part of the latest version of Actions, as introduced in an event at GitHub headquarters in San Francisco.

Also new: Suggested workflows, a feature that draws on GitHub’s machine learning project and other teams within the company for workflow automation, Schoening said.

“We look at the languages that are predominantly used in repositories and therefore make certain predictions. Over time, because we want to make it as easy as possible to onboard, we are going to look at even more detailed and nuanced analysis of a repo,” he said. “So for example, instead of just saying, ‘Hey, you’re clearly using a node project, do you want to get started with our node workflows?’ diving one layer deeper and say, ‘Oh, you’re using this type of node project.’ And so those are things that we’re looking into for the future, because it makes it just so much more of an easier onboarding.”

GitHub Actions will be made generally available November 13 at GitHub Universe, a company spokesperson told VentureBeat in an email.

Once generally available, Actions will remain free for public repositories and open source projects, and private repositories will be charged on a pay-as-you-go basis.

Generally available Actions will include features like the ability to host actions on your own virtual machine and actions for GitHub Enterprise Server customers.