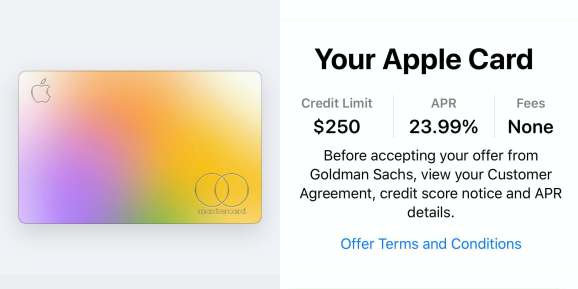 Apple may have become known for premium-priced technology, but the company’s new Apple Card credit card is being made available to a large cross section of borrowers, including people who might not qualify for other major cards. Users invited to the early Card preview program are being accepted even with weak credit scores, albeit generally with relatively high interest rates and low credit limits.

Early user comments on Reddit and Twitter have confirmed rumors that predated the card’s release: Rather than restricting the Apple Card to its wealthiest customers, Apple and partner Goldman Sachs are casting a wide net to broaden the service’s customer base. While users with credit scores in the 700s are unsurprisingly getting accepted on the spot, so are many users in the low to mid 600s — enough that rejections are comparatively uncommon. At least one user with credit “in the high 500s” was also accepted, albeit with a $750 credit limit.

As part of the application process, users are asked to provide some basic personal details to enable a quick decision and confirming credit check through TransUnion, most notably including current income level. Combined with known debt obligations, income level appears to be a key factor in determining whether Goldman instantly approves or rejects the user’s application.

Users who have received rejection emails are often reporting they were told “monthly debt obligations are too high given your income,” while some others have received nonspecific in-app denials that simply say Goldman Sachs “is not able to approve your application at this time.” Additionally, at least one user who repeatedly applied after being initially denied succeeded in receiving the most basic of terms: a $250 credit limit and 23.99% APR, not enough to buy any iPhone.

As CNBC notes, Apple’s interest in offering credit to a large number of customers dates back to the late 1990s, when then-CEO Steve Jobs hoped to issue a Capital One-backed card — preferably without rejecting any Apple customers. But the company was at that point focused almost exclusively on computers, and expensive ones at that, as this predates the release of $99 iPod shuffles and $299 iPad mini tablets that brought large numbers of more budget-conscious customers to the table.

It remains to be seen whether Goldman’s broad willingness to lend will ultimately help or hurt the companies’ bottom lines. But history suggests that they’ll be just fine, particularly if they limit the credit they extend to riskier borrowers to relatively small amounts. Applicants with better credit scores and higher income level are receiving interest rates just under 13%, with credit limits in the thousands of dollars, potentially enough to purchase Apple’s expensive upcoming Mac Pro computer and optional Pro Display XDR monitor.