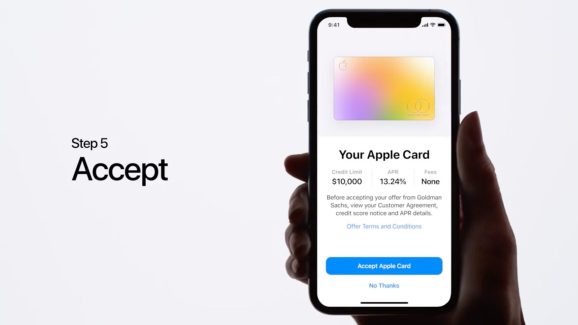 With the launch of its consumer credit card Apple Card now only days away, Apple has activated an application website for the offering, including a short video explaining how the signup process works on iPhones. As recently suggested, the site indicates that users will be able to apply for the Apple Card using an iPad.

Launched under the domain wallet.apple.com, the application site provides a straightforward process: Open the iPhone’s Wallet app, press the plus button in the upper right corner, choose Apple Card from the list of Payment Cards, fill in your personal information, then accept the card’s offer terms. iPad users can instead see the same general process by opening the Settings app and going to Wallet & Apple Pay.

The preview video suggests that accepting the terms will be as simple as looking at mandatory disclosures such as your offered Credit Limit, APR, and Fees — the latter notably presented as “None,” consistent with Apple’s “no fees” marketing for the Card. You can tap on a button to read the offer’s terms and conditions, or just hit a button to Accept Apple Card; if you don’t like the terms, you can press “No Thanks” instead.

Apple’s site doesn’t currently allow uninvited customers to apply for the card. Rather, it says that some people have “received an email invitation to the Apple Card Preview,” an opportunity to try out the system before general availability later this month. Users who weren’t invited to the preview can opt to receive a notification when the card is available.

For the time being, the site says that Apple Card will be available to U.S. citizens and lawful residents 18 years of age or older, using the latest version of iOS, on an iPhone that can use Apple Pay — anything newer than the iPhone 5s, apparently. iPad models with Touch ID or Face ID are supported for Apple Pay, but it’s unclear at this point whether Apple will require the iPad user to also own an iPhone for some reason.

Apple Card is scheduled to launch at some point in August, as confirmed by Apple CEO Tim Cook on a recent earnings conference call. The card is backed by Goldman Sachs, and expected to be offered to a very large number of iPhone users, including those with limited or weak credit histories.