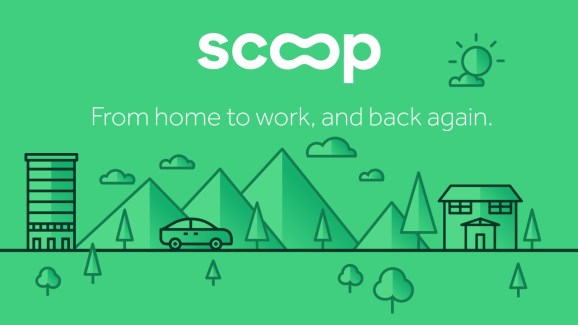 Americans inordinately drive to work. In point of fact, 76.4% of U.S. workers report commuting to the office alone, compared with the just 5.2% who say they take mass transit. Even in New York City, with its extensive transit and rail system and high levels of congestion, more than half of people get to their workplace by car.

Brothers Rob and Jon Sadow cofounded Scoop four years ago to shift the paradigm by partnering with businesses to encourage carpooling among employees, and they’re making progress. Scoop today announced that it’s raised $60 million in funding led by Activate Capital, with participation from new investors NGP Capital, Total Group, and BNP Capital and returning investors Index Ventures, Signia Venture Partners, Workday Ventures, and G2VP. The capital infusion comes after a $20 million series B in November 2017 and a $10.6 million series A in November 2017, and it brings Scoop’s total raised to over $106 million.

“We’re thrilled to partner with both our investors and customers to help improve what is often one of the worst parts of all of our days: our commutes,” said Sadow. “We look forward to aggressively expanding across the United States in order to meaningfully impact quality of life for commuters everywhere.”

Much like Waze Carpool, BlaBlaCar, Zimride, Pogo, Uber Commute, and other carpooling services on the market, Scoop connects drivers regularly commuting to or from work with neighbors and coworkers. Users type in their home and workplace addresses using the Scoop app for Android or iOS, and next they specify their preferences and indicate whether they’re willing to ride or drive riders. (Scoop runs motor-vehicle-history checks on all of its drivers.) Then, Scoop’s algorithms take into account routes, detours, and favorites to narrow down the most efficient route.

Requests for rides to work must be submitted by 9 p.m. the night before, while rides home have to be reserved before 3:30 p.m. that afternoon. Depending on the trip’s distance, riders pay between $2 and $10, all of which goes to the driver (excepting Scoop’s fee of $1 per rider per trip).

Somewhat uniquely, Scoop operates as a “flexible commuter ride-sharing” as opposed to a transportation network company (which encompasses Uber and Lyft), and so its reimbursements are capped at the Internal Revenue Service’s roughly 54-cent-per-mile limit for carpooling. Drivers receive higher payments if they pay for parking or tolls, and when Scoop offers pricing through partnerships with employers.

On the subject of employers, Scoop says it’s teamed up with more than 55 companies including Samsung, LinkedIn, Rakuten, Brightedge, Clover, Expedia, Lumentum, Symantec, Workday, T-Mobile, and Bedrock and facilitated more than 7 million carpool trips to date. That’s up from 2 million car trips in November 2017.