Facebook is phasing out the Messenger discover tab, a tool it launched two years ago to help users find new bots and businesses.

The discover tab, which was first announced at Facebook’s F8 developer conference in April 2017, was designed to help extend Messenger’s utility beyond a simple messaging app, with categories such as sports, news, shopping, finance, education, and more. However, with Facebook ramping up its push to evolve and refocus Messenger, it seems that it’s now looking to simplify and declutter the app.

Back in October, Facebook started rolling out an overhauled Messenger app, with a focus on the app’s core function as a tool for connecting people. Then a few months back, it announced Project Lightspeed, which will effectively lead to a new lightweight Messenger built on an entirely new codebase. Today’s announcement fits into that broader picture, vis-à-vis only including features that users want to use — especially when Facebook already offers other mechanisms for connecting consumers with businesses across its suite of apps.

“We want to make it more seamless for people to reach out to businesses on Messenger in places where they’re already looking to connect,” noted Ted Helwick, director of product at Facebook’s Messenger business. “We will put more investment into tools to connect people and businesses — including updates to m.me links, web plugins, various entry points across our family of apps, as well as ad products — that lead to Messenger.” 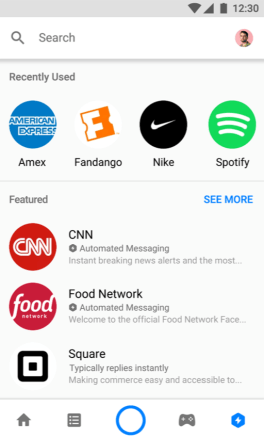 Alongside this news today, Facebook also officially launched a bunch of new Messenger features that were first announced at F8 back in April, including an appointment booking tool, an automated lead generation tool that enables businesses to qualify and track potential leads, and a bunch of additional tweaks and upgrades.

Facebook hasn’t given an exact timeframe for when it will ditch the discover tab, but it did say that it will happen over the next few months.