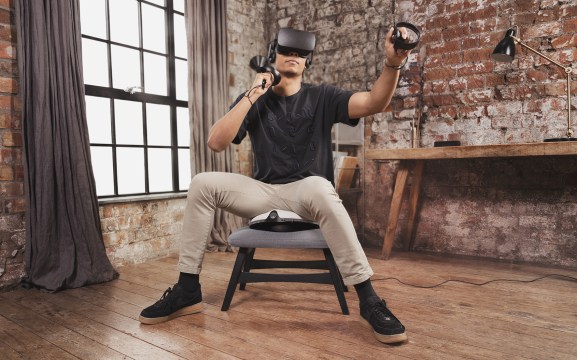 The VRGO Mini is a balance board controller for VR. You control it with your butt.

For the longest time, I was a 3DRudder snob.

Why add yet more clutter to already complicated VR setups, right? But the VR balance board’s release on PSVR proved its value, especially for gamers wanting more precise locomotion when using two Move controllers. It’s a niche product for sure, but still a welcome antidote to the headset’s current limitations. Now the VRGO Mini wants a piece of that pie.

The original VRGO was an egg-shaped stool you could lean back and forth on to move around in-game. It aimed to provide an immersive, comfortable means of movement without the need for room-scale space. The idea was sound but it was bulky, expensive and not the most fashionable piece of interior decor. The VRGO Mini, meanwhile, is a much more compact disc you place on top of another chair or couch. It connects to devices wirelessly via Bluetooth.

The kit’s has launched on Kickstarter, hoping to raise $24,350. Its creators expect to start shipping units around six months or so after the campaign’s closure. If you’re looking to use it on PSVR you’ll need a game controller converter. They won’t ship with one themselves. VRGO recommends the Cronus Max or Titan One.

Indeed, I was startled by how much more convenient the Mini is compared to the original. There’s a special raised mat you can lay down to use the kit on couches and armchairs (which costs extra), though I tried it on a swivel stool. Smartly, the choice of demo was Skyrim on PSVR, perhaps one of the most damning examples of Move’s lack of analog sticks. The kit does support basically every other headset (including Quest) and any other game (through the use of a controller converter on PSVR), but this is where I see it getting the most attention.

Initially, I found the VRGO Mini to be wobbly and unwieldy. Trying to balance the Move’s many buttons in my head while literally keeping my balance as I leaned from side-to-side was dizzying. Leaning forward was fine, if a touch too sluggish, but going in the opposite direction had me worrying I was going to fall off of my chair. Obviously, if you were in a chair with a back you’d be less worried about that, but then you wouldn’t be able to lean back as easily. With these extra concerns on my mind, I started to actually find myself more flustered than if I had just been using the Moves.

Having said that, the more I played the more I found myself getting adjusted to the experience. Mini’s cushioned seat is very comfortable, making long play sessions viable. There’s also controller-like vibration, though this was pretty heavy-handed in my demo (and made a loud rattle on the stool). VRGO says it’s still fine-tuning this element, however. There will also be two SKUs, with a cheaper one ditching the haptics.

Ultimately I’m still not convinced that leaning to walk is a more natural means of locomotion than controller-based alternatives. But I’m also conscious of the fact that not everyone can handle that sort of VR locomotion. This is a device aimed at a specific group of enthusiasts that want an immersive way to play while seated. The more I became acclimatized with the VRGO Mini, the more I could see that, I’d just rather stick to standing as it is. It’s down to you whether you find the idea of tilting your feet or leaning your body as the best way to move while seated in VR.