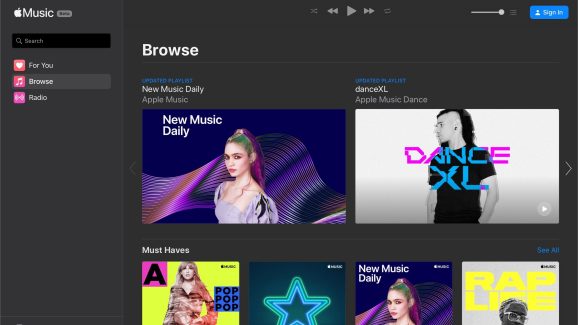 Apple’s subscription music streaming service, Apple Music, has until now only been available through dedicated iOS, macOS, Windows, and Android apps, but that’s changing today with the beta release of a web-based client that works across multiple browsers: beta.music.apple.com.

Users can access all of Apple’s 20-million-plus songs through the web interface, “all ad-free,” as well as the contents of whatever personal tracks they’ve sent to Apple’s servers. In fact, the page promises to let a user access “your entire music library on all your devices,” notably without limiting that list of devices to its own products. The browser also provides access to music videos, plus web-based “radio” stations including Disney Channel music, genre-specific streams, and pop hits from six different decades.

It’s likely that Apple Music’s arrival on the web is setting the stage for the discontinuation of iTunes on the PC, following Apple’s decision to kill the app on Macs and split its functionality across the Finder and smaller apps. Moving Music functionality into a web browser would enable Apple’s PC development team to focus largely on drivers for syncing iOS devices and older iPods with Windows.

If you’d like to try the beta service yourself, it’s available now with the option of a free trial. On macOS Catalina, clicking on the “Try It Now” button notably leads back to the Mac’s Music application rather than offering a web-based signup option.