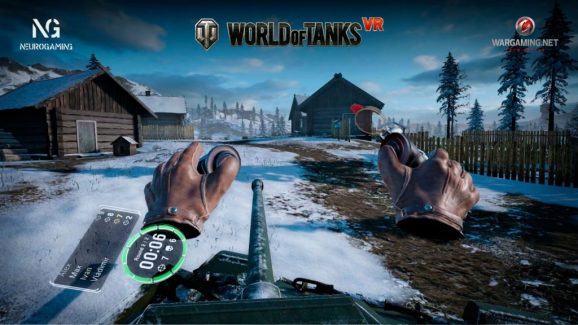 Driving a tank is a "hands-on" experience in VR.

SynthesisVR is adding another big gun to its arcade lineup: World of Tanks VR.

We first played this official spinoff of Wargaming’s online game last year (SimCity creator Will Wright once called it an online shooter for old people.) However, Synthesis will be giving the game a global rollout via its arcades on September 13.

World of Tanks plays a little differently than you might expect. Instead of simulating a realistic tank cockpit, players find themselves sitting on top of their war machines. They then move the vehicle a little like it were a remote-controlled car. While perhaps not as authentic as some might hope for, it does provide fun arcade-style combat perfect for, well, arcades. Battles consist of two to four players choosing between three tanks across three maps. We’ve got a brief look at the game in the below trailer.

At launch players will be put to the test with prizes up for grabs at local arcades.

Sadly there’s still no word as to if Wargaming will ever release a home-based version of World of Tanks VR. We’d certainly welcome the game on PC VR headsets. Wargaming’s mixed reality division, Neurogaming, is also doing experiments in AR and beyond.

It’s not the only big game Synthesis has added to its lineup recently. Last month we reported that Slightly Mad Studios’ Project Cars Pro was launch in its arcades too. The company offers a location-based entertainment operation package that also includes content from companies like Vertigo Games. A standard plan starts at $25 though the company also just announced the release of a free version.