Volocopter, a German company that’s developing electric takeoff and landing (eVTOL) aircraft, announced it has raised €50 million ($55 million) in a series C round of funding led by Chinese automotive company Zhejiang Geely, which owns such well-known car brands as Volvo and Lotus.

Founded in 2011, Volocopter is one of several urban aviation startups to emerge in recent times, including Lilium, which has raised more than $100 million for a similar proposition. Boeing also recently launched a test for its “flying car” prototype, and Airbus completed its first autonomous air taxi test last year. Uber, for its part, is also investing big in air taxi research.

As part of its ambitions to populate the skies with flying cabs, Volocopter recently announced a prototype air taxi landing facility ahead of trials in Singapore. It’s designed to showcase Volocopter’s vision of a future in which personal urban air transport is a reality. These landing hubs will also serve as essential infrastructure should Volocopter’s machines get off the ground. 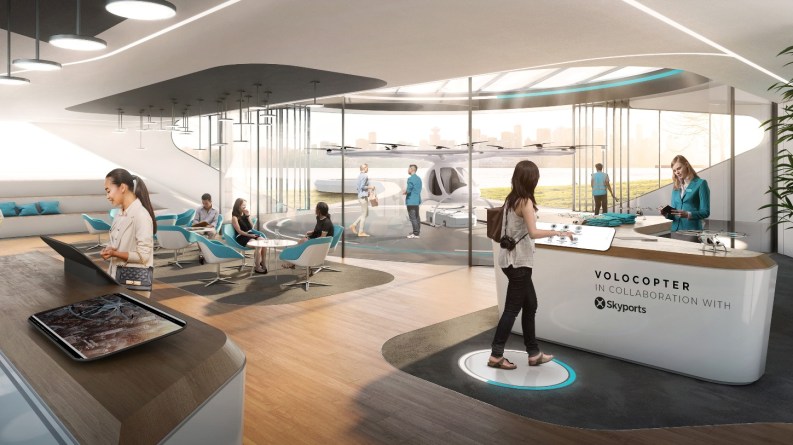 In its eight years in business, the company has trialed and iterated across three generations of aircraft, which have received various licenses for both manned and unmanned flights. Last year, Volocopter demonstrated its first passenger flight with former Intel CEO Brian Krzanich in the driving seat.

Above: Volocopter’s first passenger flight in an aircraft hanger (former Intel CEO Brian Krzanich is inside).

Volocopter had previously raised around $34 million from big-name investors that include Daimler and Intel, and with its latest cash injection it plans to work toward commercial certification for its recently announced two-seater VoloCity air taxi through the European Aviation Safety Authority (EASA). The company said it hopes to launch commercially by 2022.

“Urban mobility needs to evolve in the next few years to meet rising demand,” Volocopter CEO Florian Reuter said. “With our Volocopter air taxis, we are adding a whole new level of mobility in the skies. This funding round is allowing us to take great strides toward bringing urban air mobility to life whilst being respectful of our shareholder’s money.”

This is actually the round’s first close, and the company said it hopes to add more funds to the pot later this year, from both “strategic and financial investors,” according to a statement.

Geely’s involvement in the round is notable, as its investment represents part of a broader partnership that will lead to a joint air mobility venture in China.

“Geely is transitioning from being an automotive manufacturer to a mobility technology group, investing in and developing a wide range of next-generation technologies,” added Geely chair Li Shufu. “Our latest cooperation with Daimler, building on our partnership in smart and premium ride-hailing services, as well as our joint venture with Volocopter, underlines our confidence in Volocopter air taxis as the next ambitious step in our wider expansion in both electrification and new mobility services.”