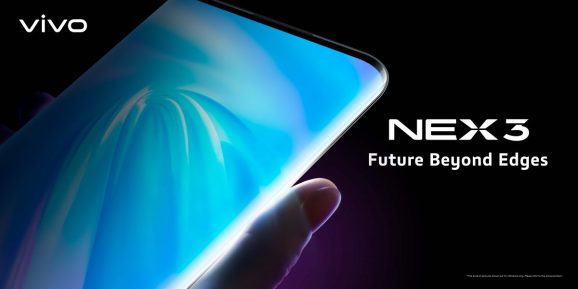 Leave it to Vivo to unveil a nearly 7-inch smartphone with a chart-topping 99.6% screen-to-body ratio. During an event in Shanghai, the Dongguan, China-based company took the wraps off the Nex 3, which ships in both 5G and 4G variants and boasts a three-camera system with a telescopic lens.

Pricing and release dates have yet to be announced, but Vivo says the Nex 3 will be available in the coming months in Asia Pacific, Southeast Asia, and other markets.

Its debut comes as the company, which now sells its phones in 1,000 cities in over 18 markets globally, reaches over 200 million users. “The Nex 3 series is testament to Vivo’s commitment to the future of smartphone design and development. It demonstrates Vivo’s continuous redefinition and breaking of boundaries and pursuit of perfection by providing users with advanced technology and an innovative product experience,” said Vivo senior vice president Spark Ni.

The Vivo Nex 3 measures 167.44 x 76.14 x 9.4 millimeters and weighs 218.5 grams, which is roughly on par with its predecessor (157.2 x 75.3 x 8.1 millimeters and 199 grams). It’s cut from the same cloth too, with a vapor chamber cooling system designed to prevent overheating and a sloping back panel that tapers to the left and right to meet display-shielding reinforced glass.

But that’s where the similarities end. The Nex 3 lacks physical buttons, instead opting for a touch-controlled scheme dubbed Touch Sense that comprises an in-display sensor and an X-axis vibration haptics system. As for the front camera — a 16-megapixel model with an f/2.09 aperture — it emerges from a recessed portion on the top of the Nex 3, driven by a purpose-fit motor and customized gear. 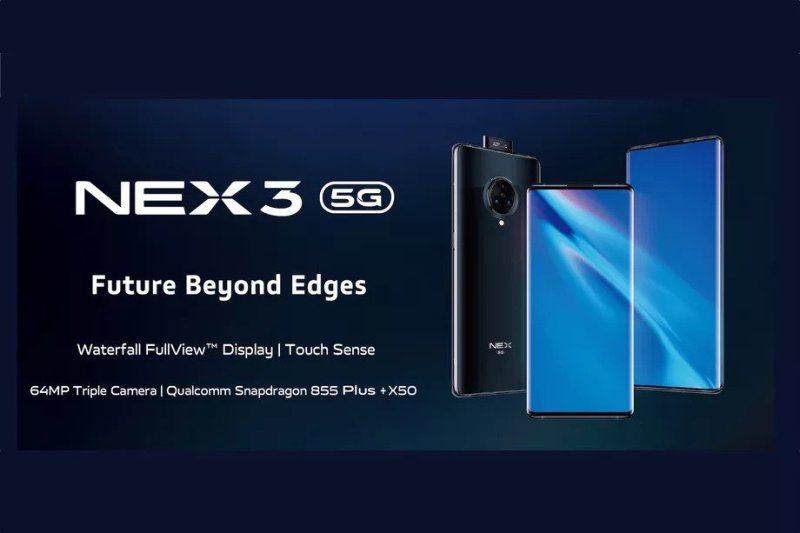 The Nex 3 features what Vivo’s calling a “waterfall” display, a notch-free 6.89-inch Full HD (2,225 x 1080 pixels) POLED screen that extends along the curve of its left and right edges. Vivo says it’s built with luminescent materials that enable it to achieve display brightness up to 800 nits while minimizing flicker and supporting HDR10, plus 100% coverage of P3 wide color gamut.

The beating heart of the Nex 3 is Qualcomm’s Snapdragon 855 Plus, a beefed-up version of the San Diego chipmaker’s eight-core Snapdragon 855 system-on-chip. It’s paired with either 8GB or 12GB of RAM, depending on the configuration, and 256GB of speedy UFS 3.0 high-speed flash memory.

Other accouterments of note include support for BeiDou and GLONASS positioning, in addition to GPS, and NFC and Bluetooth 5.0.

On the photography side of the equation, the Vivo 3 features the aforementioned three-sensor rear camera, complete with a 64-megapixel main camera with an f/1.8 aperture. It’s flanked by a 13MP wide-angle camera (f/2.2 aperture) and a 13MP telescopic camera (f/2.48 aperture) in a ring configuration, both of which tap the preloaded Portrait Master app’s Hyper-HDR feature to boost dynamic range.

When it comes to audio, the Vivo 3 packs the AK4377A, a chip that supports Hi-Fi sound over Bluetooth. It and the rest of the flagship phone’s electronics are driven by a 4,500mAh battery, which supports Vivo’s proprietary Super FlashCharge 44-watt fast-charging and C-DRX power-saving tech.

The Nex 3 ships with Vivo’s Funtouch OS skin (version 9.1) atop Android 9.0, imbued with Vivo’s in-house AI assistant — Jovi — which optimizes the software experience based on app usage patterns. In the Nex 3’s camera and gallery apps, it’s able to identify faces and highlights from videos to create spotlight reels, categorize albums, and extract text from documents.

Jovi also serves up contextually sensitive cards based on the time of day, your location, and information you voluntarily supply it. You’ll see things like a weather report if it’s about to rain, a reminder to rest if you haven’t set a morning alarm, a tally of the total steps you’ve taken, and upcoming (and past) sporting events in which you’ve expressed an interest.

Another nifty setting takes advantage of the curved screen’s edge to deliver notification reminders, akin to Samsung’s Edge lighting. It can be configured to do things like display the color of your choice when a text or call comes in.