Ever wished your smartphone had a dual selfie camera? What about a dual selfie camera that retracted into the phone’s body? If so, Vivo’s newly revealed midrange flagship might fit the bill. The Dongguan, China-based firm this morning took the wraps off the V17 Pro, a handset sporting what might well be the world’s first pop-up 32-megapixel two-sensor camera. Among the other spotlight features are a quad rear camera and an edge-to-edge display, neither of which are to be outdone by the AI-imbued camera app that automatically boosts picture clarity.

The V17 Pro is an aluminum-and-glass affair with rounded corners in two colorways: black and blue. The undoubted headliner — the elevating front-facing camera module — sits near the earpiece and follows in the aesthetic footsteps of the Vivo Nex’s, Nex 2’s, and V15 Pro’s motorized sensors. But it ups the ante with an 8-megapixel wide-angle sensor with a 105-degree field of view, and with an LED that works in tandem with the V17 Pro’s Night Selfie mode to illuminate faces in dimly lit scenes.

As for the rear camera module, it comprises four sensors, including a 48-megapixel primary sensor and complementary macro, wide-angle, and 13-megapixel telephoto sensors. The telephoto boasts 2 times and 10 times optical and digital zoom, respectively, while the macro camera has a focal length of 2.5 centimeters. On the software side, there are two improved “beautifying” features in Pose Master and AI Makeup, which instruct subjects how to pose attractively for pictures and brush over imperfections with algorithmic tools. 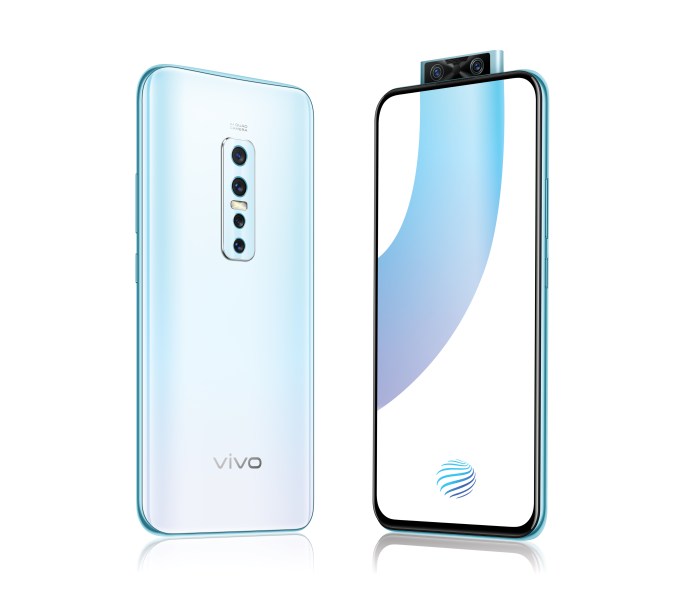 The V17 Pro is decidedly middle of the road in most other aspects, right down to its 6.44-inch AMOLED display (20:9 aspect ratio). It has a 91.64% screen-to-body ratio, a far cry from the forthcoming Nex 3’s 99.6%, and its fingerprint sensor is embedded beneath the screen glass, a paradigm that’s fast become the norm rather than the exception. That said, the display has characteristics to recommend it, namely 100% coverage of the DCI-P3 color gamut and anti-flicker tech that filters 42% of sleep-disrupting blue light.

Under the hood of the V17 Pro, you’ll find a Qualcomm Snapdragon 675 system-on-chip paired with 8GB of RAM and 128GB of storage, plus a 4,100mAh battery compatible with fast charging. Other specs were hard to come by at press time, but Vivo’s touting tech like Multi-Turbo, which promises to speed up boot times by 25% and wake times by 9%. Game Center surfaces metrics like phone temperature and data usage, while Ultra Game Mode temporarily silences messages and alerts. Lastly, there’s the somewhat bizarre Voice Changer option, which modifies the tone and tenor of your voice over multiplayer game chatrooms.

The V17 Pro’s pricing has yet to be announced, but we’ll update this post once we learn more.