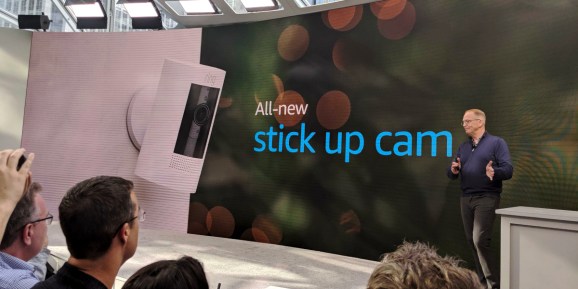 Amazon today shared plans to roll out Doorbell Concierge, a way for AI assistant Alexa to answer your front door and speak with visitors through Ring video doorbells. Concierge will begin to roll out for Ring Video Doorbell Elite users starting next year, Amazon VP David Limp said onstage in a presentation at company headquarters in Seattle.

The concierge uses Alexa Conversations tech to take messages for a homeowner, ask the best way to contact a visitor, or even tell a delivery person where to leave a package.

Also introduced today for home security: Alexa Guard for tracking when a person is detected in your home when you’ve told Alexa you’re not there.

Many new devices made their debut today, including the Echo Studio smart speaker with 3D sound, a new generation of Echo speakers, Echo Buds, and a range of new features. A number of first-party devices include Amazon Smart Oven, Echo Glow light, Eero WiFi router, and Echo Flex, which spreads an array of microphones in your home for communicating with Alexa.

At the same event last year, Amazon introduced roughly a dozen new devices, including a new smart plug as well as AmazonBasics microwave and wall clock, each of which can be controlled with Alexa.

The continued marriage of Alexa with AmazonBasic is Amazon’s attempt to yoke its ecommerce marketplace and Echo’s presence in tens of millions of homes to sell more smart home devices.