Back in June, alongside an updated PowerPoint Designer, Microsoft unveiled Presenter Coach, an AI-powered PowerPoint feature designed to provide guidance with respect to pacing, tone, and attention. Today, the company announced that Presenter will launch this week for Office 365 customers on the web, alongside inking in Office for the web, new Whiteboard templates, and 3D lesson plan models.

Presenter Coach is in public preview, and the inking features are now generally available in PowerPoint for Windows and Mac. Digital pen annotation in Slide Show on PowerPoint hit the web this week, as did Whiteboard templates in public preview on Windows 10 (rolling out to iOS within a few days). As for the 3D models and lesson plans, they’re generally available to Office 365 subscribers in Windows.

As you might recall, Presenter Coach walks users slide by slide through presentations and provides real-time feedback on cadence, profanity, and phrases that might be considered culturally insensitive. It also alerts presenters when they appear to be reading slides verbatim. At the end of each rehearsal session, it provides a detailed report with metrics like filler words used and their frequency, problematic slides, words per minute, and speed over time. 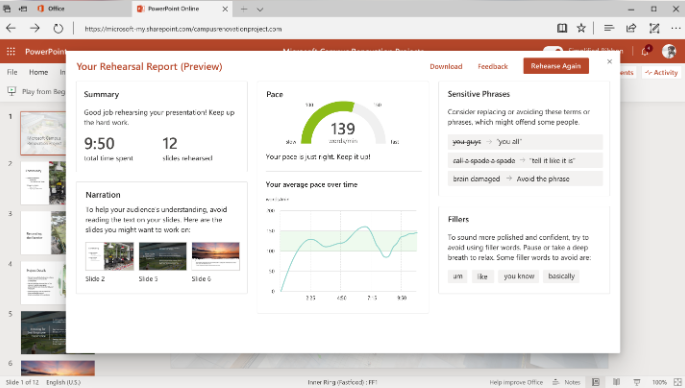 For instance, Presenter Coach detects the pace of speech and recommends changes that might help audiences better retain facts and figures. If a user inserts a disfluency like “um,” “ah,” “like,” “actually,” or “basically” or makes a potentially gender-charged reference like “you guys” or “the best man for the job” it will recommend alternatives.

PowerPoint has long supported inking features in some form or another, enabling users to handwrite words and convert them into text or draw shapes like hearts or clouds. But annotating slides directly while presenting hasn’t been possible — until now. 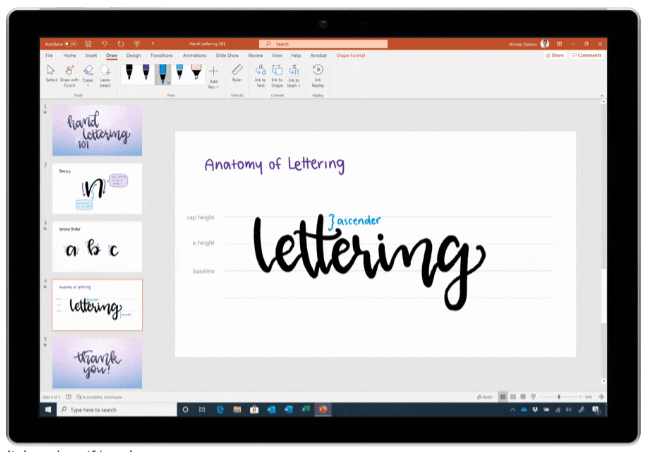 Above: Inking in PowerPoint.

Starting this week, Office users on the web can dispense with laser pointers in favor of real-time scribbling directly on slides.

Annotation complements the Ink Relay feature in Slide Show, which conceals and reveals inked content written on slides and exposes the order in which ink was drawn.

Templates in Microsoft’s class-platform Whiteboard sketchpad are as they sound: Each provides tips for running activities, along with structures and outlines that expand to fit content. At launch, you’ll find templates for KANBAN sprint planning, SWOT (strengths, weaknesses, opportunities, and threats) analysis, project planning, learning, and more, all of which can be added with a tap of the insert button in the app’s toolbar. 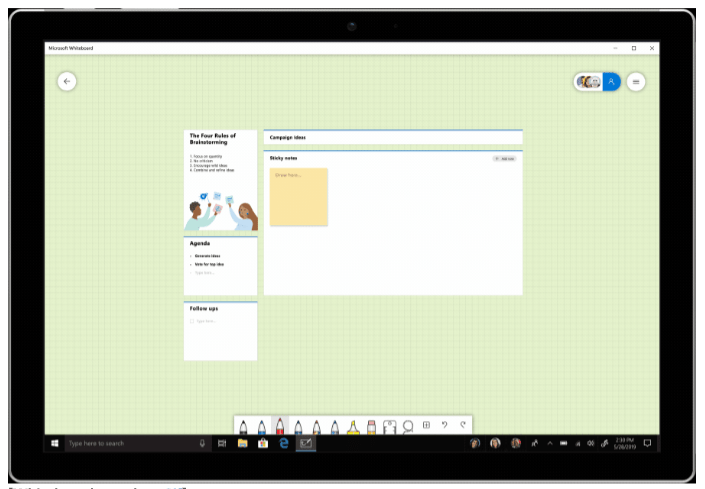 Above: Templates in Whiteboard.