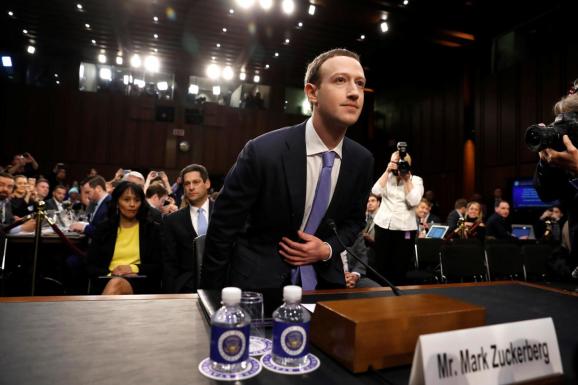 In the audio, Zuckerberg talks to employees about issues ranging from the possibility of U.S. lawmakers attempting to break up the company to its plans to compete with video-sharing app TikTok.

He also urged employees to tell friends who do not like the social media platform that Facebook cares about the problems and is working to solve them.

Here are six things that Zuckerberg told employees, according to the transcript:

The Facebook CEO said he expected the company would face, and defeat, legal challenges if Democratic U.S. Senator Elizabeth Warren were elected president. Warren has vowed to break up giant tech companies like Facebook, Amazon and Alphabet Inc’s Google.

He also said breaking up big tech companies would make election interference “more likely because now the companies can’t coordinate and work together” and drew laughter by saying Facebook’s investment on safety was bigger than Twitter’s entire revenue.

Without absolute control, ‘I would have been fired’

Asked how he balanced his financial responsibility to shareholders with his moral responsibility to society, Zuckerberg reminded employees of moments when he believes his concentrated control helped Facebook ride out difficulties such as Yahoo’s 2006 bid for the company.

“One of the things that I’ve been lucky about in building this company is, you know, I kind of have voting control of the company, and that’s something I focused on early on,” he said.

“And it was important because, without that, there were several points where I would’ve been fired. For sure, for sure…”

Zuckerberg was also questioned about Facebook’s ‘plan of attack’ against TikTok, the rapidly growing video app owned by Chinese tech giant ByteDance, which has gained huge popularity among teenagers.

He said that Facebook was focusing its new standalone video-sharing app Lasso, but would test it first in markets where TikTok is less prominent, such as Mexico.

Zuckerberg touched on the company’s ambitious plans to establish a cryptocurrency called Libra. Announced in June, the project quickly ran into trouble with skeptical regulators around the world.

Zuckerberg said these responses had been part of Facebook trying “a more consultative approach” on big projects.

“So not just show up and say, ‘Alright, here we’re launching this. Here’s a product, your app got updated, now you can start buying Libras and sending them around,'” he said.

Facebook does not want to get into brain surgery

Facebook announced last month that it had bought New York-based CTRL-labs, a start-up that is exploring ways for people to communicate with computers using brain signals.

In the transcripts from the earlier July meetings, Zuckerberg said he thought that as part of Facebook’s work on artificial reality and virtual reality, there would be a small amount of “direct brain” interface and that progress in this area was exciting.

But he stressed that Facebook was focused on non-invasive approaches that do not require surgery or implants.

“You think Libra is hard to launch,” Zuckerberg joked, imagining the headline “‘Facebook wants to perform brain surgery.’ I don’t want to see the congressional hearings on that one.”

Outside contractors who monitor Facebook for objectionable content have complained that their work was underpaid, stressful and sometimes traumatic. An employee asked Zuckerberg about Facebook’s plan to protect these types of contractors.

Zuckerberg said it was an “important issue that we’re focused on” but he also said some of the reports were “a little overdramatic.”

“Within a population of 30,000 people, there’s going to be a distribution of experiences that people have,” he said.

CTO Mike Schroepfer also stepped in to say that the company was working on technology to minimize harms for human moderators, for example, by automatically catching duplicate content.