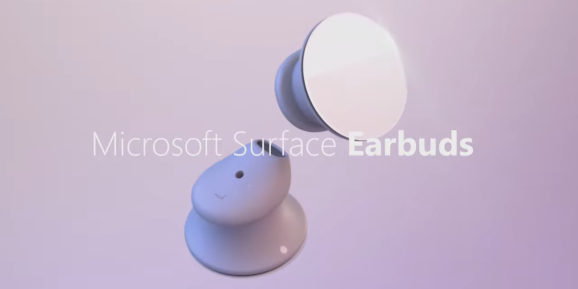 “Out of the box, it just works,” Samji said. “On PC, it launches Cortana. On iOS, it will launch Siri, unless you’ve changed it. And I think it might vary depending on the distribution of Android, but all the ones I’ve tested, the first time I do it, Android asks me what I want as my default.”

Surface Earbuds still offer a better experience with Cortana (although without the “Hey Cortana” wakeword), Samji made sure to emphasize. Surface Earbuds can do everything with Cortana that the Surface Headphones can do, like chit-chat, interact with your email, check your calendar, get your daily update, and create to-dos. Samji said his team created a more streamlined flow for all this Cortana functionality. It’s called Surface Audio.

A Surface Audio trademark filing from September 27 was discovered by LetsGoDigital earlier today. The trademark is classified under Class 9, which is reserved for firmware and software. Samji confirmed Surface Audio is the companion app for the Surface Earbuds.

“Everything about this product is about user choice,” Samji added. “If you want to use Android, iOS, or Windows, we support that. But we also want to make sure if you want to use Cortana, we make it super simple.”

Additionally, the Surface Audio app lets you customize settings such as the equalizer, volume, and gestures. Surface Earbuds’ gestures include double tap (go in and out of the call, or play/pause), swipe up and down (control volume), or even swipe forward and back (switch tracks in music, switch slides in PowerPoint). Specifically on Android, there’s also a triple tap to launch Spotify under your phone’s lockscreen — you can triple-tap again to have Spotify to choose another song using its ML.

Surface Earbuds don’t have a launch date yet — Microsoft said to expect them in time for this holiday season.