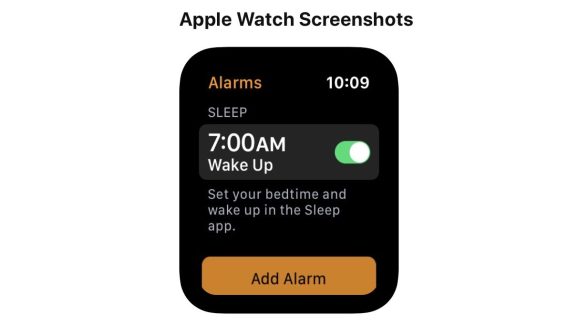 Prior to the launch of the Apple Watch Series 5 in September, sleep tracking was expected to be one of the major new features, enabling wearers to correlate their resting movements with shallow and deep sleep — but the rumored app never launched. Now an official Apple Watch App Store listing (discovered by Daniel Marcinkowski) confirms that a Sleep app exists; the only question is when it will launch.

In one of Apple’s unusual Watch experience decisions, the classic iOS Clock app was split into four separate watchOS applications: World Clock, Alarms, Stopwatch, and Timer, none improved over their unified predecessor app. But a watchOS 6 screenshot for the existing Alarms app suggests it will tie into the new Sleep app, enabling users to have an alarm set automatically by setting “your bedtime and wake up in the Sleep app,” with a corresponding on-off switch for an Apple Watch-based alarm.

Since the Watch debuted, Apple has suggested that users remove the device for charging while they sleep, all but eliminating the need for an on-device alarm. The Alarms app has been there, however, with the ability to rouse users from slumber with a series of haptic taps that might be less disturbing to a sleeping partner than a sonic alarm — assuming the Watch has enough battery power to be used overnight.

While some other smartwatches have included sleep tracking functionality for years, Apple has moved slowly on the feature, acquiring a Finnish bed-based sleep tracking accessory company called Beddit in 2017. Even if you put aside the power demands of all-night movement tracking, there are still questions as to how useful sleep tracking “insights” really are for users and what accuracy claims or suggestions Apple might make in an official app.

As mentioned in our review of the Apple Watch Series 5, overnight battery life is even more of an issue for Apple’s latest wearable than its predecessor. Whether the always-on screen or a lack of software optimizations are to blame, the Series 5 model drains much faster than the otherwise similar Series 4, making it less suitable for overnight use without a midday charge. Rumors prior to the new Watch’s launch hinted that Apple might suggest users swap between two Watches for day and night use, a concept that might well have led to mockery if floated during the Series 5’s debut.

An official release date for the watchOS Sleep app remains unknown, but it could pop up in a point release of watchOS 6, or wait until watchOS 7 next June at WWDC. A report earlier this year claimed that it will arrive by 2020. Currently, watchOS 6.1 is available in developer beta form without any other sign of the functionality.