White sharks are being spotted off the Pacific coast more than ever before. A 2014 study found that, at minimum, California’s shark population now exceeds 2,000. And the California Department of Fish and Wildlife reports that since 1950, there’s been at least 158 documented cases where a shark approached a person in the water, 44 of which occurred since 2010.

Those numbers are at best rough estimates — tracking shark encounters is an imperfect science largely reliant on first-hand reports. But members of Salesforce’s Einstein AI team and oceanographers at the University of California’s nonprofit Benioff Ocean Initiative say they’ve developed a better solution in a system that susses out great whites from drone footage.

The hope is that it’ll help keep beaches safer while encouraging a more informed public, according to Benioff Ocean Initiative Director and UCSB professor Douglas McCauley. “The benefit of drones is that you’ve got an eye in the sky to see more of the ocean,” he said in a statement. “It’s super cheap to fly up and down the beach. That’s the easy part. But what comes after is where AI becomes really valuable. Every hour of video footage requires an hour of a video analyst’s time. If you’re trying to gain insights in real time, that’s not efficient. That’s where computer vision really comes into play.”

The way McCauley explains it, the bulk of the work was motivated by the unknowns surrounding the uptick in shark sightings, particularly along the Santa Barbara shoreline. It’s been attributed to climate change, but additionally to legislation like The Clean Water Act of 1972 and the Magnuson-Stevens Act of 1976, which protect the sharks’ habitats and prevent against overfishing. With any luck, readily available up-to-date metrics will spur further study into the ecosystem’s bounceback. 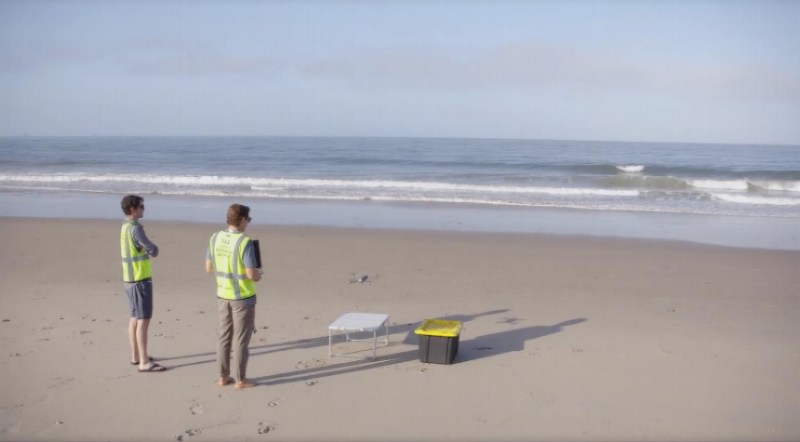 Earlier this year, McCauley teamed up with Salesforce chief scientist Richard Socher, San Diego State Associate Professor of Computer Science Xiaobai Liu, and Salesforce Director of Research Michael “MJ” Jones to investigate how AI might be used to detect the presence of sharks in coastal waters. Rather than pursue a custom solution, they decided to bootstrap Einstein Vision, Salesforce’s visual search and product identification service, to process drone video and automatically identify sharks by their unique attributes.

They built a workflow for video capturing and processing around the Einstein Vision-powered framework, dubbed Project SharkEye, and they recruited students from the University of California Santa Barbara to film a 10-mile stretch of the coastline with a fleet of drones. The footage they collected served as a training corpus for SharkEye’s underlying AI models, enabling it to differentiate among shark species, non-shark objects, and previously sighted sharks.

McCauley envisions AI-powered autonomous drones deployed at every lifeguard tower in Santa Barbara, which would make flights and deliver data not only regarding sharks but other hazards Einstein Vision could be trained to recognize (like riptide and signs of pollution). In the near term, the Salesforce and Benioff Ocean Initiative plans to offer an adapted version of the Salesforce Field Service Lightning mobile app — an app typically used for onsite job management and access to scheduling and knowledge bases — to surf school teachers, marine biologists, and others who’ll be able to quickly check how many sharks were spotted at any given time and where.

“This application is unique because we’ve had the privilege of building it hand in hand with our community partners,” said McCauley. “For us, it was a fantastic opportunity to apply AI to not only capture data of value to shark researchers, but to also be able to try to be helpful to our community by sharing that data.”

McCauley believes that by delivering this sort of information to stakeholders, it might shed light on a species that’s traditionally misunderstood, like where they’re swimming (and why) and their behavior and feeding patterns. He points out that sharks remain a vulnerable species only one step up from endangered status; according to the International Union for Conservation of Nature analysts, 14.4% of the approximately 470 species of sharks are considered “near threatened,” meaning they’re endangered of becoming extinct in the near future.

“Lifeguards do a superb job of protecting all of us when we head to the beach,” added McCauley. “But they are constantly on the lookout for next-gen tools and technologies to help them better assess the situation at their beaches. AI could very well be one of those new tools.”