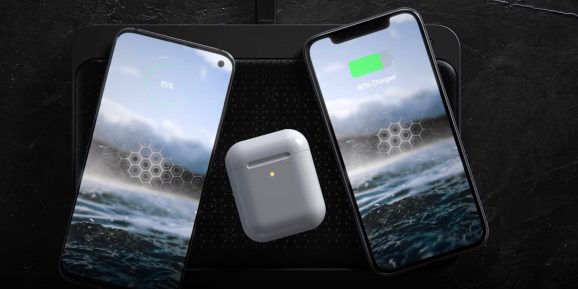 Apple’s multi-device wireless charger AirPower was ignominiously canceled earlier this year after multiple reports of development problems, but that hasn’t stopped other companies from bringing similar concepts to market. The latest is Nomad, which today announced an inductive charger called the Base Station Pro — like AirPower, a flat surface with a matrix of Qi charging coils inside, capable of refueling three devices without the need for finicky positioning.

Externally, Base Station Pro looks a lot like Nomad’s prior Base Station — gunmetal aluminum housing with a black leather pad on top. But rather than using a surface with only three total charging points, all hidden so you need to hunt for them, there’s an 18-coil hexagonal grid of Qi chargers inside. The grid makes Base Station Pro larger than its predecessor, but also enables you to place your devices wherever you prefer.

There are a couple of hitches. Unlike AirPower, which promised (but failed) to work with Apple Watches, iPhones, and AirPods in Apple’s wireless charging case, Base Station Pro doesn’t have Apple Watch support. Also, each of the Qi charging points is capable of 5-watt recharging speeds, below Apple’s peak supported 7.5-watt speed. These two limitations radically reduce the complexity of Nomad’s design compared with what Apple was promising — enough to make the product actually viable for release, while restricting the surface to something like two iPhones and a pair of AirPods, or one iPhone, one pair of AirPods, and a second phone or Qi-charging accessory from another company.

AirPower, by contrast, was claimed to be able to use multiple overlapping matrices with 21-24 charging points that could identify whether a device needed 7.5-watt or less power, automatically switching from high- to low-power sources while providing the connected iPhone with a real-time summary of multi-device charging data. Reports suggested that Apple’s prototypes were either overheating or suffering from other engineering issues, such as interference, and the device was publicly scrapped in late March.

Nomad’s 18-coil matrix was developed by a company called Aira, which calls its surface “FreePower.” According to the companies, FreePower is capable of intelligently optimizing power output for each device, rapidly detecting devices, and delivering “dynamic sweet spots,” though we’ll have to wait until final units are available to see how it performs in the real world.

Base Station Pro is expected to begin shipping with a 30-watt USB-C PD power adapter and a two-meter USB cable at some point after preorders begin in November. Nomad hasn’t listed a price for the accessory yet — and it could be prohibitively expensive — but is taking signups for preorder updates at its website now.