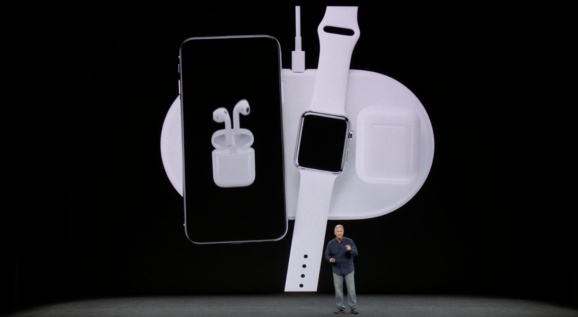 AirPower was unveiled on September 12, 2017 and expected to ship in 2018. It disappeared from Apple's web site in September 2018, and Apple stopped commenting on its status.

One and a half years after announcing a wireless charging mat for iPhones, Apple Watches, and AirPods called AirPower, Apple has unexpectedly canceled the accessory. It notably missed potential and expected shipping dates multiple times, including a seemingly likely release alongside the second-generation version of AirPods with a wireless charging case this week.

“After much effort, we’ve concluded AirPower will not achieve our high standards and we have cancelled the project,” said Apple SVP of hardware engineering Dan Riccio in a statement today. “We apologize to those customers who were looking forward to this launch. We continue to believe that the future is wireless and are committed to push the wireless experience forward.”

Originally revealed in September 2017 alongside the iPhone 8, iPhone 8 Plus, and iPhone X, AirPower promised to simultaneously charge three devices at once — an iPhone, Apple Watch Series 3 or newer, and AirPods earphones with a then-unreleased wireless charging case. The hook was that users could lay each Apple device anywhere on a plain white surface without worrying about positioning; Apple said it had developed a proprietary variant on Qi inductive charging that could locate devices and send them the correct levels of power to match their needs.

Apple never confirmed a specific price or date for AirPower, saying only that it would arrive in 2018. Price tags ranging from $99 to $199 were floated by analysts but never confirmed by the company, as March, September, and end-of-year release opportunities passed without any announcement. Last year, Apple unusually removed virtually every reference to the device from its marketing materials.

Behind-the-scenes scuttlebutt hinted that the release was delayed due to various charging issues, including Apple Watch-specific challenges and potentially long-term reliability of the entire charging system. Twenty-two separate charging coils were intended to be used in the system to facilitate “anywhere” placement of devices, increasing the potential for overheating.

But following a supply chain report that Apple was still working on AirPower and hints that iOS 12.2 had finally added support for it, the problems appeared to have been overcome. Just last week, the company secured trademark rights to the AirPower name, eliminating a legal issue that might have explained some of the delays and the scrubbing of Apple’s site.

Apple’s decision to cancel AirPower at such a late stage is unprecedented. Though the company’s website remains bare of AirPower references, the accessory’s name and/or image were featured on boxes of second-generation AirPods wireless charging cases delivered this week, though the boxes notably included 2018 dates. A last-minute “no” to shipping makes clear that the company would sooner suffer the modest issues related to releasing nothing at all than the serious problems that might follow if paying users received and had trouble with the device.