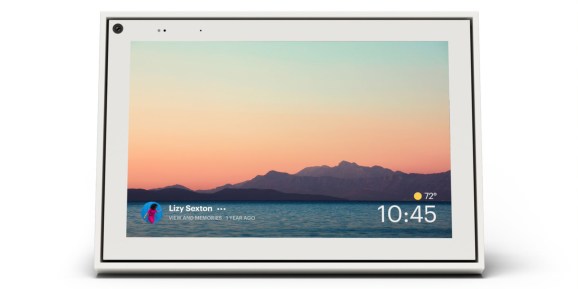 In recent weeks, Facebook’s Portal unit has rolled out a number of new devices and features. Facebook’s video chat device is coming to the workplace, and Portal TV for watching video with friends during video calls is due out next month.

Today, Facebook begins shipping the Portal Mini and second-generation Portal smart display for $129 and $179, respectively. Both make voice and video calls on Facebook Messenger and WhatsApp, but using the two Facebook apps with Portal is not yet a comparable experience. More on that later.

The 10-inch second-generation Portal comes with some design changes. And Portal’s offerings for users have grown since Facebook’s first piece of internally made hardware hit store shelves a year ago. But the biggest addition this year is the introduction of WhatsApp, now Facebook’s most popular app, according to January 2019 App Annie analysis.

With more than a billion monthly active users, WhatsApp may also be one of the most widely used communication platforms on Earth, but Facebook appears to have made little effort to negotiate challenges when combining Facebook Messenger and WhatsApp contacts on a single device.

There’s still no way to satisfy the urge to like photos that appear on your screen  — which is frankly kind of odd, since it seems like a way to reengage people who have chosen to use Facebook less often.

But at launch, the biggest problem with Portal is that no one seems to have considered the need to keep WhatsApp performance on Portal on par with that of Facebook Messenger.

Portal with WhatsApp does gets Smart Camera for automated video framing and pan movement, as well as Smart Volume to compensate and turn up volume when someone is speaking from a distance.

That you can’t do everything with WhatsApp that you can do with Facebook Messenger during a Portal video call does not come as much of a surprise. WhatsApp has always lagged behind Facebook Messenger in these kinds of features. A minimal user interface is nothing new for WhatsApp, and that didn’t delay its sharp rise to 1.2 billion monthly active users.

But what’s surprising is that the device can’t respond to voice commands to begin a WhatsApp voice or video call. Portal devices come with Alexa, but a Portal assistant handles voice commands for voice and video calls.

WhatsApp also does not appear to be incorporated into Photo Booth, a Portal app for sharing photos or video messages up to 30 seconds long. The absence of WhatsApp here is noteworthy since it’s the first way to use Portal to share media.

In place of rounded edges, the second-generation Portal has sharp 90-degree dimensions akin to a photo frame.

When inactive, a Portal device turns into a digital photo frame that pulls pictures from Facebook. This spring, Facebook opened Superframe to include some of your Instagram shots and launched a dedicated app for photo management.

The first version of Portal came with a cap to block the camera, but the cap could be taken off and lost. Now the camera cover lives in the device. It seems like a small thing, but in my experience people without a cap to cover the camera are prone to unplugging the device out of fear that Facebook is watching them.

This summer, I wrote an op-ed about Facebook’s ambition to make interactive video calls with Portal devices, pointing out the good and the bad. At that time, WhatsApp for Portal was a definite highlight to look forward to, but what I didn’t expect is that Facebook would put so little effort into integrating WhatsApp into the device.

It still helps that Portal calls can let you keep a family in frame. A dedicated device for your video calls is still helpful, particularly for those of us with family in lots of different places who have made video calls a regular routine.

But WhatsApp with Portal needs some work if it is to utilize all of the device’s other features, from basic voice commands to augmented reality effects and the ability to send WhatsApp video messages.