China’s launch of commercial 5G services has been one of the year’s more unusual stories: A national multi-carrier rollout that was planned for October 1 shifted to November 1, and the top three carriers reportedly preregistered 10 million 5G customers before revealing service prices. Now one of the carriers appears to have leaked pricing plans, and they’re surprisingly aggressive, signaling China’s interest in establishing itself as a huge market for 5G hardware and services.

According to details posted by the Chengdu branch of China Mobile (via cnBeta), the carrier will offer monthly 5G data plans starting at only 128 Yuan ($18), setting a new international floor for the high-speed service, with the most premium plan priced at 598 Yuan ($85). Unsurprisingly, the $18 plan will come with significant restrictions — limited voice talk time with 30GB of total data, speed capped at 300Mbps — while higher-end plans will offer up to 300GB of total data, speed capped at 500Mbps or 1Gbps, with additional talk time. 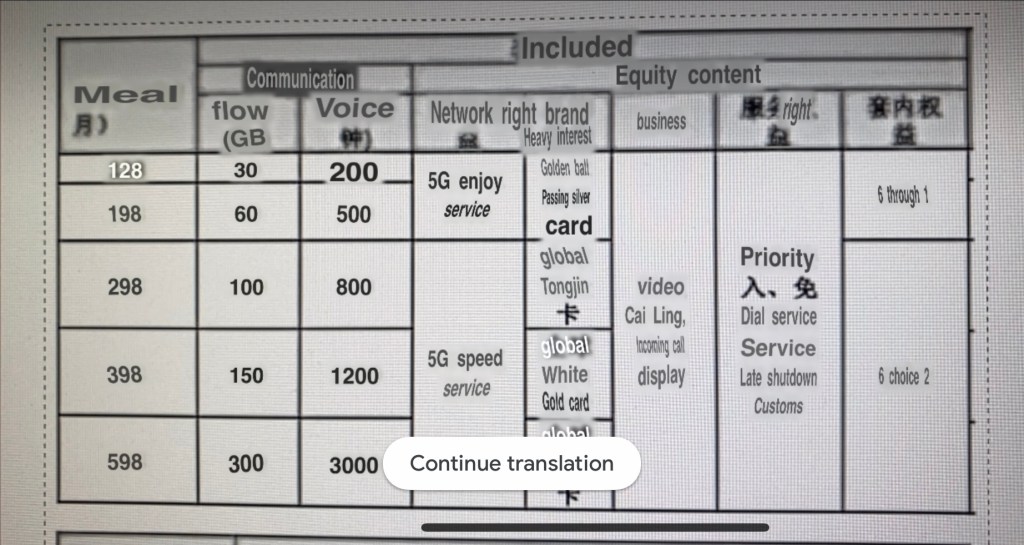 Interestingly, the China Mobile leak suggests all three major operators will have the same entry-level pricing and similar packages, differentiating their offerings with network quality and customer service. For instance, while China Mobile’s “basic” 5G service will hit 300Mbps as a peak, users won’t have priority network access in busy areas — the faster and pricier “enjoyment” and “speed” plans will offer either “priority” or “optimal” network access during times of congestion. China Telecom and China Unicom, by comparison, may offer more talk time but different local 5G coverage.

Pricing for 5G data plans has been a major point of discussion over the past year as carriers across the globe have wrestled with encouraging early adoption and use of new high-speed network assets while paying for significant infrastructure investments. In South Korea, carriers have split between capped and unlimited plans, with the latter starting at $70. U.S. carriers have largely focused on $70-$90 “unlimited” monthly plans while offering no access options at historically popular sub-$50 price tiers. That could change by year’s end, as T-Mobile rolls out a nationwide but likely slower 5G offering at a more aggressive price.