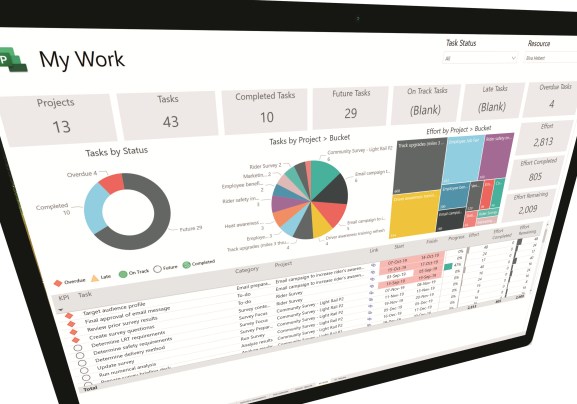 Microsoft is rolling out an all-new version of its project management software known as Microsoft Project as the company sets out to better equip teams to “collaborate on projects more efficiently.”

Microsoft Project doesn’t garner the same attention as the myriad other business-focused tools in the Microsoft Office family of products, but it was actually one of the first apps available when Windows launched back in the 1980s. At its core, Microsoft Project is about enabling teams to schedule and assign tasks, track progress, manage budgets, and more. Much has changed over the years, of course, and the cloud now plays a pivotal part in Project’s appeal, with every member of a team able to have the same view of a project at the same time.

Last September, Microsoft announced plans for a new version of Microsoft Project, and in the intervening months it has rolled out iterations of the various features, though they may not have been visible for everyone. From this month, however, the features are being pushed into general availability, meaning the new Microsoft Project will soon be live for everyone around the world.

The broader Project interface has also been redesigned to make it easier to create new tasks, add new members, and switch between grids, boards, and timeline charts. But digging down into the new Project platform reveals that Microsoft is pushing deeper integrations with its various other business tools, including Office and its chat-based collaboration tool Teams.

Microsoft Teams now claims more than half a million organizations as customers, and at least 13 million daily active users, so tying this crucial team communication tool into its project management software makes a great deal of sense. This will prove particularly useful for nationally or globally distributed teams, which will now have seamless integration between projects, covering file-sharing, calendar schedules, messaging, and more.

Users can also create interactive dashboards for specific parts of a project in Microsoft’s Power BI analytics service and then get a “big picture” view across all projects using a new feature called Roadmap. Until now, Roadmap has been off by default — company admins have had to manually activate the feature since its first release earlier this year. With the general availability of the new Microsoft Project, this will become a default offering.

In essence, Roadmap is designed to surface insights and provide a broad overview of all projects visually — this includes viewing the status of all tasks, projects, portfolios, and programs. Users can also use filters to view only specific tasks, milestones, or phases of a given project.

What Microsoft has in its corner, of course, is sheer scale as one of the leading business software companies on the planet. It also has Windows and Azure cloud services up its proverbial sleeve. Combined, this gives Microsoft a major advantage in terms of the promise of integrated project management and communication processes that work online everywhere.

Additionally, this upgrade seems to be just the first in a number of updates for Microsoft Project — in the next year or so, Microsoft is promising a bunch of new tools covering budget analysis, resource management, and expense tracking.