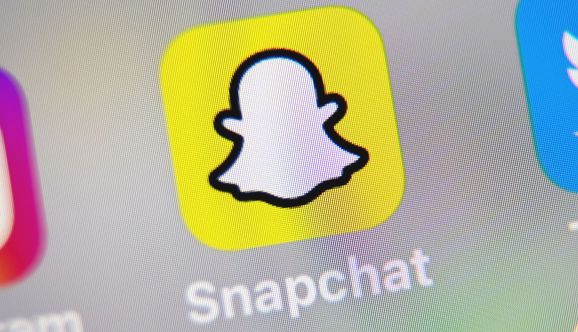 A picture taken on October 1, 2019 in Lille shows the logo of mobile app Snapchat displayed on a tablet.

This latest launch represents part of a growing AR investment push from Snap that in the past couple of months alone has included raising $1 billion in debt and launching new dual-camera Spectacles capable of creating 3D AR content.

3D Paint is rolling out from today for iOS devices first, and it is available through the AR Bar, which was first announced back in April as a dedicated space at the bottom of the Snapchat camera for Snapchatters to create and browse AR content.

Users can access the 3D Paint feature specifically by hitting the Create button in the AR Bar, and they can manually draw visuals on top of their faces through the selfie camera, or atop whatever they see in front of them through the main rear-facing camera. It’s not unlike the AR Doodle feature that Samsung launched alongside its Note10 smartphone lineup a couple of months back.

Above: 3D Paint on a selfie

Above: How a 3D Paint creation might look through the main camera.

Snap has doubled down on its AR efforts over the past few years. Back in 2015, the company rolled out machine learning-based Lenses that gave users a funky way to share images of themselves with terrifying effects planted on their face, and it later added World Lenses to the mix, allowing users to augment their surroundings with funky graphics.

Back in 2017, Snap rolled out its first desktop app in the form of Lens Studio, allowing anyone — developers, advertisers, or consumers — to create their own AR Lenses from scratch. 3D Paint builds on that concept, except it puts the power of creation directly in the pockets of its 210 million users.

Though 3D Paint is limited to iOS for now, Snap said it will be landing on Android “in the coming months” alongside the new AR Bar.