Right on schedule, Apple today officially launched its long-anticipated subscription video service Apple TV+ — a handful of Apple Original shows bundled together for $4.99 per month, streaming to users in over 100 countries. But the company saved a small surprise for the last minute: the option of a $49.99 annual plan that further discounts the service for paying customers.

Uncharacteristically for the company, Apple TV+ is leaning heavily on discounts and outright giveaways to lure potential viewers to the service. Users who have purchased a new Apple device since September 10, 2019 are automatically offered a one-year free subscription within the Apple TV app, a promotion Apple describes as available for a “limited time” but will likely maintain for a calendar year. Apple CEO Tim Cook described the free subscription this week as a “gift” to customers.

Those without a recent Apple device purchase are offered a free seven-day trial, after which a paid monthly subscription automatically begins. Users are given the opportunity to cancel at any time, which immediately terminates any remaining free service. Additionally, students with $5 monthly Apple Music student subscriptions apparently get ongoing access to the Apple TV+ service for free. 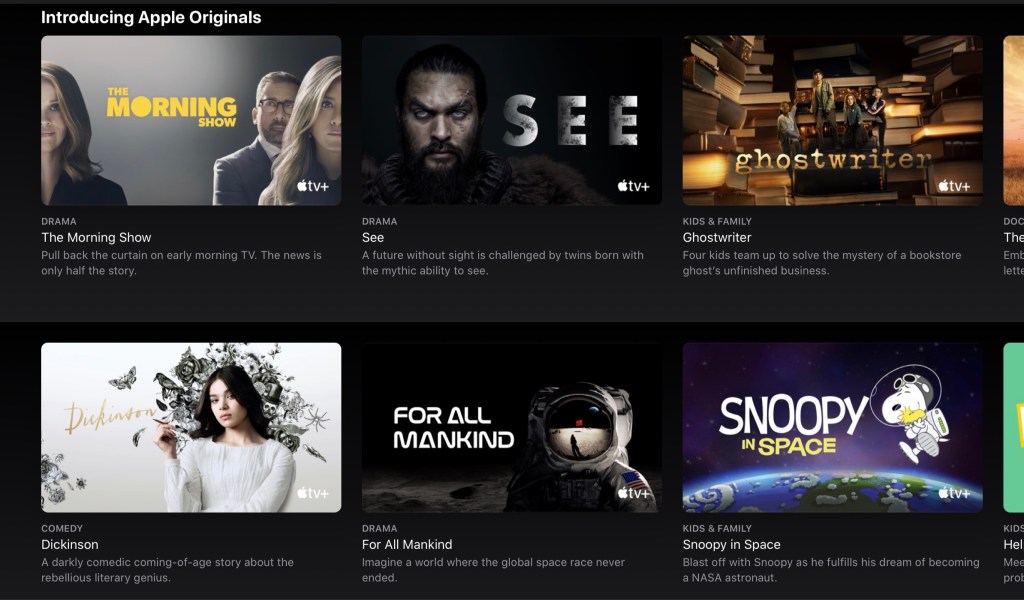 The initial slate of Apple TV+ titles has drawn mixed reviews. Flagship drama The Morning Show has been written off as “boring,” while critics have described futuristic series See as unintentionally funny. Reviews have been somewhat kinder to two other series, For All Mankind and Dickinson, while Oprah’s Book Club and kids shows Snoopy in Space, Ghost Writer, and Helpsters constitute the rest of the episodic content initially available. A movie called The Elephant Queen is also part of the launch.

Some of the shows are launching with three initial episodes and a plan to add one new episode per week on Fridays. Others are available as complete seasons right now. Apple says it will debut the M. Night Shamalyan series Servant at the end of November, and Truth Be Told in early December, with the Kumail Nanjiani show Little America and movies Hala and The Banker arriving in “the coming months.”

Apple has committed billions of dollars to developing original content for the service, reportedly spending $6 billion to commit to multiple seasons of various shows and one-off productions. The company has also broadened availability of its iTunes videos and Apple TV video apps to third-party platforms, recently adding some Samsung smart televisions, Roku devices, and Amazon Fire TVs to its own products as TV+-ready streamers. Episodes can also be streamed directly from tv.apple.com. But the profit outlook for the major investment remains unclear at best.

Additional TV shows are expected to launch over the coming months to fill out the Apple TV+ catalog, though Apple is not — for now — including any access to third-party videos as a component of the service. Rivals Netflix, Hulu, and Disney+ have relied heavily on catalogs of popular content to win subscribers, investing money in original content as a supplement to keep customers engaged. Apple’s service is modestly less expensive than rivals, but considerably less filled out in the content department.