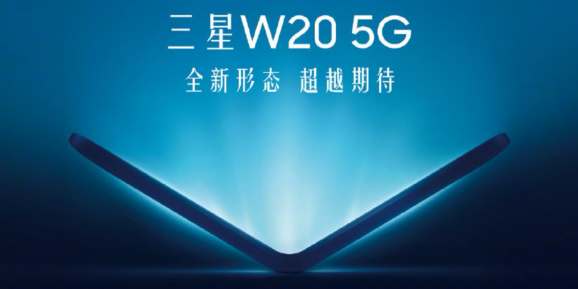 Now that China has officially launched 5G data plans across multiple carriers and cities, the race to establish early winners in the 5G handset market is officially underway. To that end, China Telecom is already trying to grab attention with an interesting option: a new Samsung folding phone called the W20 5G.

Now that 5G plans are officially commercialized, how can the W20 be absent? See you in November! Samsung W20 5G: New form, beyond expectations.

It’s quite likely the device shown in China Telecom’s Weibo post is the same device teased during Samsung’s Developer Conference this week in San Jose. A brief video showed a device similar to a Galaxy S10 phone folding in half like a bifold wallet, without any further explanation, specs, or product name. China Telecom’s post appears to confirm that a device with the same physical characteristics will be 5G-capable and officially revealed this month, at least in China.

While folding phones have been a frequent topic of discussion in 2019, they haven’t yet proved to be either practical or affordable. Samsung’s $2,000 Galaxy Fold was infamously plagued with hinge and screen issues just before its initial release, leading to an extended delay and reworking of the design. Huawei similarly delayed its folding phone, the $2,600 Mate X, blaming software issues. Both devices transform from smartphone shapes into small tablets.

The more conventional “flip phone” shape was a proven success in the era before smartphones, leading to blockbuster sales and iconic status for Motorola’s RAZR series of phones, which all but evaporated in the wake of Apple’s iPhone release. However, the only obvious advantage of bringing such a design to smartphones is in reducing the device’s footprint in a pocket or bag, at the cost of doubling its thickness.

Motorola is revisiting the RAZR series with a new folding phone that appears to be similar to the W20 5G, effectively splitting a tall, portrait-oriented screen into two shorter halves that fold into a wallet-like shape. It’s unclear whether either or both of the companies have solved key complaints about the Galaxy Fold — an obvious seam in the center of the screen and susceptibility of the plastic screen cover to damage.