Companies are trying to find the most efficient ways to use machine learning models in their businesses. Modzy, a product of Booz Allen, is designed to make that process easier and safer for enterprises. Seth Clark, senior associate at Booz Allen, described Modzy in an interview with VentureBeat as a machine learning operationalization platform. More colloquially, it’s an online store where you can find and acquire AI tools.

“What we’re trying to do is help organizations get AI capabilities out of the lab, off of someone’s laptop, and into a production system,” said Clark. “And that’s something that designers typically don’t have the skills to do,” he added. “Separately, software developers … are building, managing, [and] maintaining a lot of these enterprise systems.” Those developers, he said, know how to scale software but don’t have machine learning expertise.

By creating a marketplace, Booz Allen hopes to not simply make it easier for companies to find useful machine learning models, but also to ensure that those models meet compliance standards, allow companies to better track which models are deployed (so as to avoid “shadow AI”), and give developers a platform upon which to deploy and scale their ML tools.

“We started to uncover a pattern and a challenge that all of these organizations were having with respect to developing and operationalizing AI across their enterprise. And, you know, we recognize the need for a new approach,” said Josh Elliot, director of AI at Booz Allen.

One of the issues they observed is that multiple companies they worked with on a consulting basis were all trying to build the same models. “The idea is that we’ve pulled together partners from AI startups and vendors … and [compiled] their capabilities together in this space,” said Clark. “We essentially can hunt for a capability aligned to whatever mission you’re supporting.”

That could be tools for natural language processing, language translation or sentiment analysis on audio, analyzing voicemail for spam rejection, and so on, both in the public sector and for highly regulated commercial industries. 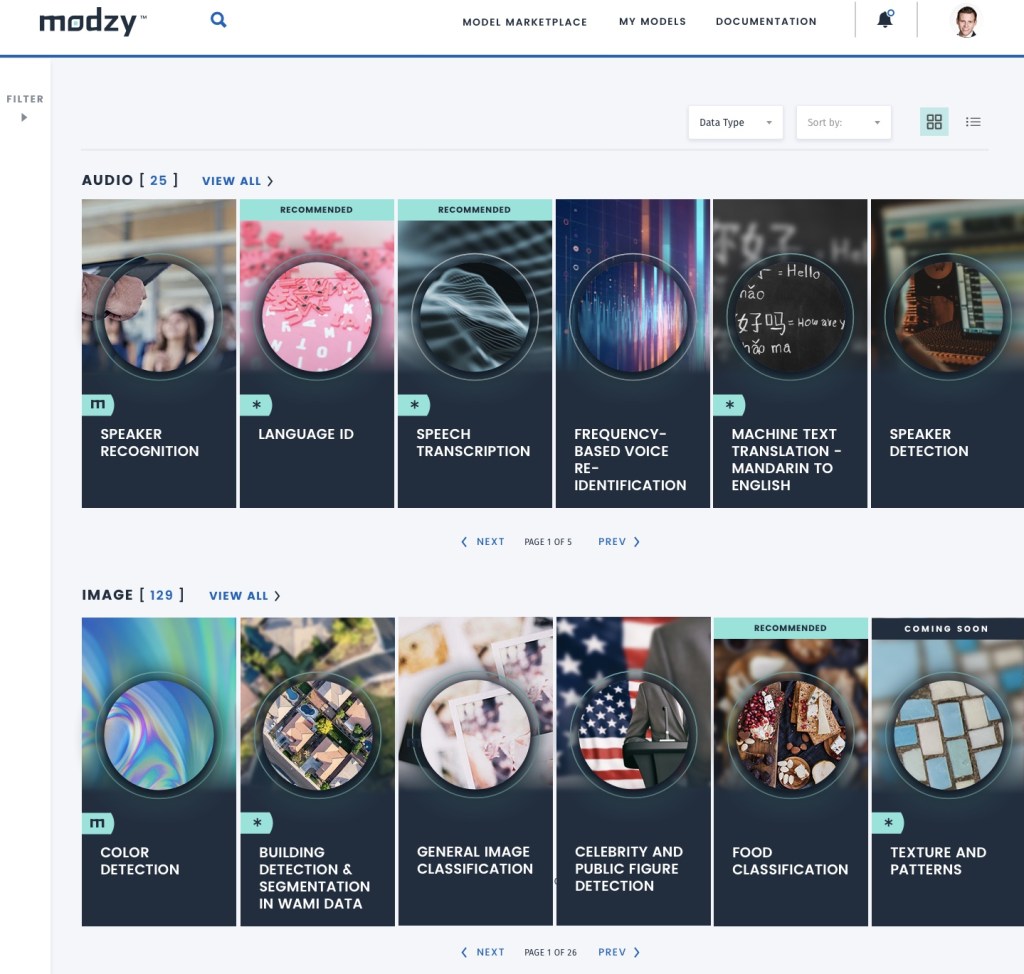 Booz Allen has an internal review board that evaluates potential Modzy entries based on a set of (unpublished) criteria. Modzy is thus curated, so anyone shopping for models can be assured of compliance standards and security requirements, as well as general quality.

Elliot said that in addition to some Early Access partners, Modzy is getting significant demand from others who want to join. Those vendors are primarily interested in selling their models through Modzy, but there’s an opportunity for open source participation, too. Companies can also use Modzy to manage their own internal models.

Modzy looks a bit like any site that sells applications, with large thumbnail images and descriptions, and more details when you click through to a model’s page. Listings include key information like technical details on training data, what architecture was used, and so on. “Really [it’s intended to include] all the information that, if I’m a data scientist evaluating whether or not this thing is going to perform well and what we’re working with, I have that information at my fingertips,” said Clark.

Modzy offers explanations of a given model’s strengths and weaknesses, too. One example is a tool that calculates building roof areas (from a bird’s eye view) for solar installations, but it doesn’t perform as well on cloudy days. That sort of information is included in the listing.

To help people figure out if a tool can actually do what they need it to, Modzy provides sample code. You can copy and paste it, add your API query, and run it against your own data.

Modzy also includes version histories, like any app store does, but in the case of AI tools that’s even more important, because developers ostensibly improve their models over time based on the training and inference cycle. To address that unique issue, you can choose whatever version you need — a newer version does not deprecate an older one. Presumably, newer versions perform better, but if for some reason the newer model is performing worse for a company that’s employing it, that company can choose not to use it.

Over the next year, Modzy may begin to offer customer model retraining, where companies can tweak models they purchase by running transfer learning.

One of the value-adds that Modzy offers is model hardening against adversarial attacks, protecting models you buy on its marketplace from manipulation from third parties. “If we see an incoming image that looks like it may have been manipulated, we’ll just bounce it; we won’t even let it run against your model,” said Clark.

Further, an adversarial attack on an image set can confuse your model by changing just a few pixels, but Clark said Modzy’s protection is such that an adversarial attack would need to change so much about an image that you could see the manipulation with the naked eye. “As a human, you would look at this image, and it wouldn’t even make sense to you; it would be incomprehensible,” he said.

Any available Modzy-made models will be so hardened, and the Modzy team can potentially help partners harden their models before they get to the marketplace.

There’s also Modzy Labs, an internal research team that stays on top of emerging research topics around machine learning and AI to anticipate what clients may need. The labs team has worked on explainability, adversarial offensive capabilities, and homomorphic encryption, wherein you can encrypt your data and still run it on an ML model and get results.

With Modzy, Booz Allen wants to avoid problems like vendor lock-in, or forcing customers to use a particular framework, technique, or model. Modzy doesn’t use consumption metrics to monetize — Elliot said the company wants to keep pricing as simple as possible so customers are better able to predict costs. Customers can pay a subscription fee for whatever models they want and get unlimited use for the duration of the subscription term.

Modzy also leaves the infrastructure decisions flexible. Companies that want to keep things in-house and run on a private cloud or on-premises can do so, and Modzy can deploy models accordingly.