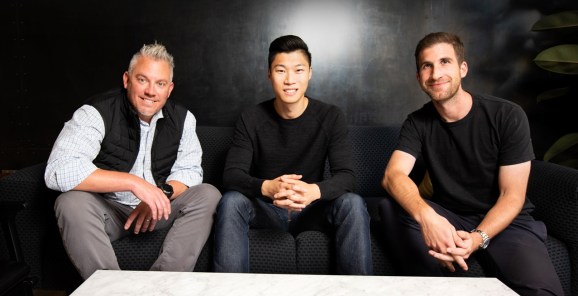 A new entrant to the burgeoning “virtual kitchen” space launched out of stealth today with $17 million in funding from a host of illustrious backers.

The startup’s funding to date constitutes a $15.3 million series A round, which closed back in June but is only officially being announced today, co-led by Andreesen Horowitz and Base10 Partners. Participating in the round were Uber Eats’ product head Stephen Chau, Opendoor cofounder JD Ross, Maple VC founder Andre Charoo. and former Yelp SVP of engineering Michael Stoppelman. The startup also raised a small seed round shortly after its founding last year from Base10 and “strategic angels” from across the technology, food, and real estate realms.

Virtual Kitchen was founded by Ken Chong, who formerly spearheaded Uber’s marketplace product team, and Matt Sawchuk, who helped launch Uber’s first peer-to-peer ridesharing service before transitioning into a role with Uber Eats in 2016. The triumvirate of cofounders is completed by chef Andro Radonich, who set up Bay Area-based corporate catering business Andro’s Rostilj. The company’s core proposition is that it uses data to find and lease the optimum locations for setting up a delivery-optimized kitchen, while also giving restaurants access to the operational and technology backbone that lets them quickly scale to new locations.

For fulfillment (i.e. delivery), the company works in conjunction with most of the big-name apps, including DoorDash, Caviar, Postmates, GrubHub, and — as you would perhaps expect given its founders — UberEats.

“A restaurant brand can go from one location to 20 locations doing delivery only with minimal effort or upfront cost,” Virtual Kitchen CEO Ken Chong told VentureBeat. “We use data to find and lease the best delivery locations, and turn it into a turnkey offering in which restaurants can expand their food delivery business.”

Virtual Kitchen’s founders and backers are particularly notable within the broader kitchen-only delivery landscape. Uber cofounder and former CEO Travis Kalanick has launched a new venture called CloudKitchens, which promises something similar to Virtual Kitchen’s premise. CloudKitchens recently closed a $400 million funding round at a reported $5 billion valuation, and the company has been poaching Uber executives to spearhead its business, much to the latter’s chagrin.

With Uber Eats now representing a major part of Uber’s business, it too has been promoting “virtual kitchens,” although they typically operate out of existing restaurants — with a different brand and separate menus designed for delivery. However, Uber Eats has started to lease out delivery-only kitchen facilities in cities such as Paris, though this is mostly under the radar at the moment.

Put simply, there are clear synergies between Virtual Kitchen and Uber, permeating founders, investors, and business models, so it would not be at all surprising if Uber decided to invest in — or maybe even acquire — Virtual Kitchen further down the road.

Virtual kitchens, which are sometimes referred to as “ghost kitchens” or “dark kitchens,” aren’t exactly a new phenomenon. New York-based Ando, which was founded by Momofuku chef David Chang, was acquired by Uber last year. Uber Eats had also served as a delivery partner for Ando. Elsewhere, Manhattan-based Maple operated delivery-only kitchens before it was bought out by U.K.-based food courier giant Deliveroo back in 2017. Indeed, Deliveroo has emerged as one of Europe’s biggest food-delivery platforms, recently raising a whopping $575 million in a round of funding led by Amazon. And Deliveroo has operated delivery-only kitchens, called “editions,” since 2017.

A quick peek across the food-delivery sphere reveals countless other startups pushing a similar concept. Pasadena-based Kitchen United creates “kitchen centers,” which are basically warehouses that can house up to 20 different restaurants, a proposition so alluring that Alphabet’s GV led a $10 million investment into the startup last year. Taster and Keatz, which operate comparable businesses out of London and Berlin, respectively, also both raised sizable sums of VC cash this year.

Underpinning most of these initiatives are large swathes of data that not only allow “food entrepreneurs” to know where to set up new kitchens but also tell them what to serve. Local demographic data can be used to figure out what kind of food outlets would work in a specific locale, while real-time consumer and operational data can be meshed to adjust menu options and test out new things.

For existing kitchens looking to expand their coverage, setting up traditional walk-in restaurants can be a costly — and risky — endeavor. Lengthy leases in prestigious neighborhoods can be expensive, with no guarantee that business will take off. With only the catering side of things to worry about, virtual kitchens can be set up pretty much anywhere, as long as they’re roughly near their target areas.

Investment bank UBS released a report last year called “Is the Kitchen Dead?,” in which it estimated that the $35 billion food delivery economy could grow tenfold by 2030. In effect, the report suggests that the rise of virtual kitchens could help drive down the cost of meals so that people mostly order takeout rather than cooking at home.

“There could be a scenario where by 2030 most meals currently cooked at home are instead ordered online and delivered from either restaurants or central kitchens,” it said. “The ramifications for the food retail, food producer, and restaurant industries could be material, as well as the impact on property markets, home appliances, and robotics.”

What we’re starting to see is the entire restaurant business evolving around on-demand transport infrastructure and big data, which allows restaurants to reduce overhead while increasing orders. These are key learnings the Virtual Kitchen founders took from their time working at Uber.

“We were surprised to see our favorite restaurants growing rapidly on Uber Eats, but when we talked to them, they told us [their] bottom-line wasn’t growing with the current brick-and-mortar setup,” Chong said. “Consumers love the convenience of food delivery apps, and demand keeps growing. We want to equip food entrepreneurs with the best platform to take advantage of the food delivery economy.”

“For a few years now, we’ve seen customers opting for more casual dining and the convenience of delivery,” noted DOSA owner and executive chef Anjan Mitra. “Combined with rising costs, labor shortages, and changes in the business climate, we have had to evolve DOSA’s business model away from full-service restaurants.”

Virtual Kitchen said that plans are in place for more than a dozen additional locations in the Bay Area alone in early 2020.