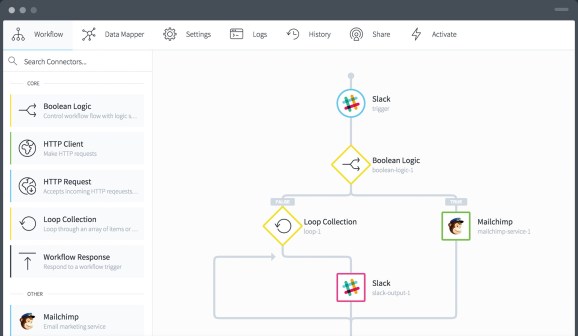 Automating monotonous records management, customer relationship management, IT, and human resources processes is the dream of every enterprise pursuing efficiency. A study conducted by Software Testing and Big Data found that approximately 10-20% of work hours are spent on dull, repetitive tasks and that businesses miss half of all automation opportunities, on average.

But if you ask folks like Richard Waldron, Alistair Russell, and Dominic Lewis, there’s hope for companies looking to embrace workflow automation. The trio of entrepreneurs launched Tray.io in 2012 with the goal of enabling enterprises to build and maintain integrations using visual tools and rich APIs.

Of course, competition is fierce in the global workflow automation market. Research and Markets anticipates it will grow by at least $19 billion in the next five years, fueled by “shifting dynamics” and high demand in the software segment. The robust market has bolstered robotic process automation firms like Automation Anywhere, which last week raised $290 million at a $6.8 billion valuation, and UiPath, which in April raised $568 million at a $7 billion valuation.

The London- and San Francisco-based startup has achieved a measure of success since then and raised $50 million in a series C round led by Meritech Capital. The latest tranche, which closed in October and was announced today, includes participation from Spark Capital, GGV Capital, and True Ventures and brings Tray.io’s total raised to around $100 million.

CEO Waldron says the funding will support strategic hiring across Tray.io’s team, as well as continued investment in product development. “We’ve seen general automation act as the new growth engine for rapidly growing companies as they solve integration challenges and scale operations with low-code general automation,” he added. “That’s why we’re doubling down on hiring the best team in the world, including veteran executives from ServiceNow and Duo to serve our incredible customers so we can continue to earn the world-class customer ratings they’ve awarded us.”

Tray.io provides a platform that integrates any web-based software using automated workflows, on a backend that can process billions of tasks in “milliseconds.” The eponymous system connects to any app with an API and processes changes in data values in real time, as part of workflows that span up to hundreds of steps in length and support event-triggering logical operators.

The company offers Tray as an embedded solution — aptly dubbed Tray Embedded — with templates and connectors for APIs, files, databases, apps, custom connectors, and business logic but is built atop a serverless architecture. Its configuration wizard walks customers step by step through each authentication in workflows, and it spotlights the parameters they need to fill prior to deployment.

Tray.io’s expansion has accelerated as of late, with bookings up by more than 500% over the past and hiring in North American and Europe across marketing, sales, customer service, and development teams triple what it was a year ago. The startup has nabbed a number of high-profile customers, including VMWare, Pearson, Udemy, Fico, Jellyvision, Vox Media, DexYP, Northwell Health, Clearbit, Iterable, InVision, SAP, Arrow Electronics, Lexmark, New Relic, Segment, Outreach, Digital Ocean, Copper, Forbes, AdRoll, Copper, and Intercom.