Five years ago, Amazon debuted the Echo with Alexa in the hopes of getting its customers to shop more on its site. Echo and all the Alexa devices that followed turned out to be pretty useless for shopping, but okay at plenty of other tasks. In fact, Alexa was so okay that we now have a plethora of virtual assistants, including Bixby, Cortana, Google Assistant, Siri, and so on.

But Alexa itself still sucks at shopping, despite its creator’s roots. That should be a warning to anyone trying to base their shopping business on virtual assistants. If you look closely, it becomes clear that Amazon knows this.

Amazon makes over 90% of its revenue from commerce. The rest is AWS, subscriptions, and other bets like ads. It’s easy to forget that Amazon is a retailer masquerading as a tech company.

Amazon doesn’t break out how much Alexa contributes in its earnings reports. Even though Alexa has the ability to let you buy goods on Amazon, few people do this. To be fair, that also goes for the other tech giants. In fact, Cortana is not even mentioned in Microsoft earnings, Google Assistant in Alphabet earnings, nor Siri in Apple earnings.

Amazon is unique in this regard — the company does mention its virtual assistant. A lot. Last quarter, Alexa showed up 22 times in Amazon’s earnings release. But Amazon won’t attribute any shopping numbers to Alexa because they’re insignificant.

The existence of Amazon Assistant

Furthermore, Amazon already has a shopping assistant: Amazon Assistant. It helps you shop online by comparing products from Amazon as you shop on other retail sites. It’s basically Amazon’s way of getting you to come back and shop on Amazon.

Amazon Assistant is available as a browser extension for Chrome, Firefox, Edge, Internet Explorer, and Opera. There’s even an Android app.

The very existence of Amazon Assistant tells you something about Alexa. If Alexa was any good at shopping, Amazon wouldn’t have to build out a separate assistant for its main business. Amazon would simply direct its shoppers to Alexa. 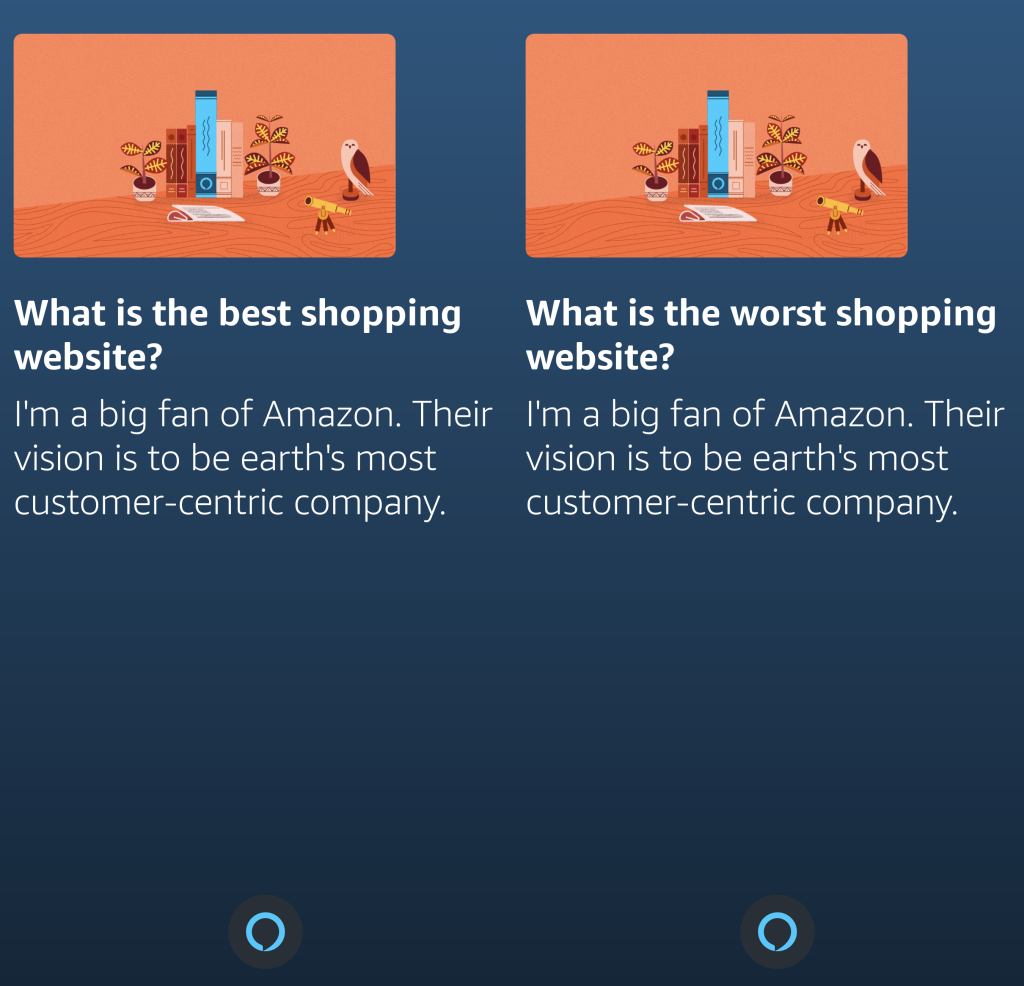 Amazon’s voice recognition can distinguish between the words “best” and “worst”, but apparently Alexa doesn’t understand the difference. Not exactly something you want when you’re trying to buy the best product in a given category. (If you say “site” instead of “website”, Alexa will respond that it doesn’t know.)

This isn’t the first mistake Alexa (or any other virtual assistant) has made, and it certainly won’t be the last. This is exactly why Amazon doesn’t let Alexa play a significant role in its core business: It’s still too early and too risky. Until Alexa becomes smarter (and Amazon is making improvements monthly), the Amazon Assistant will have to do.