In May 2018, Qualcomm introduced a dedicated mixed reality chipset called Snapdragon XR1, pitched at OEMs seeking “the minimum criteria for immersion” in mixed reality worlds. Today, the company is taking a big step forward with Snapdragon XR2, a dramatically powered-up sequel that’s being billed as “the world’s first 5G XR platform,” and may well wind up powering some of the first 5G mixed reality headsets.

Since Qualcomm offers more than one platform for mixed reality devices, it’s important to understand Snapdragon XR2’s positioning up front. While the XR1 was intended to bring the component prices down for basic XR headsets, it was ultimately used in enterprise AR glasses such as Google Glass Enterprise Edition 2 and the Vuzix M400. By contrast, the XR2 is being pitched as more powerful than both the XR1 and Qualcomm’s Snapdragon 835, which most notably powered the overachieving Oculus Quest headset.

According to the chipmaker, Snapdragon XR2 offers twice the CPU and GPU performance of the 835, over 11 times faster AI processing, six times the video resolution support, and four times the video bandwidth, albeit with only four Kryo cores — one Prime, one Gold, and two Silver — rather than eight in the 835. Using XR2, each eye can have up to a 3K by 3K display at 90 frames per second — a dramatic improvement over most VR and AR headsets today, and backed by a lot of processing power to makes those screens useful. 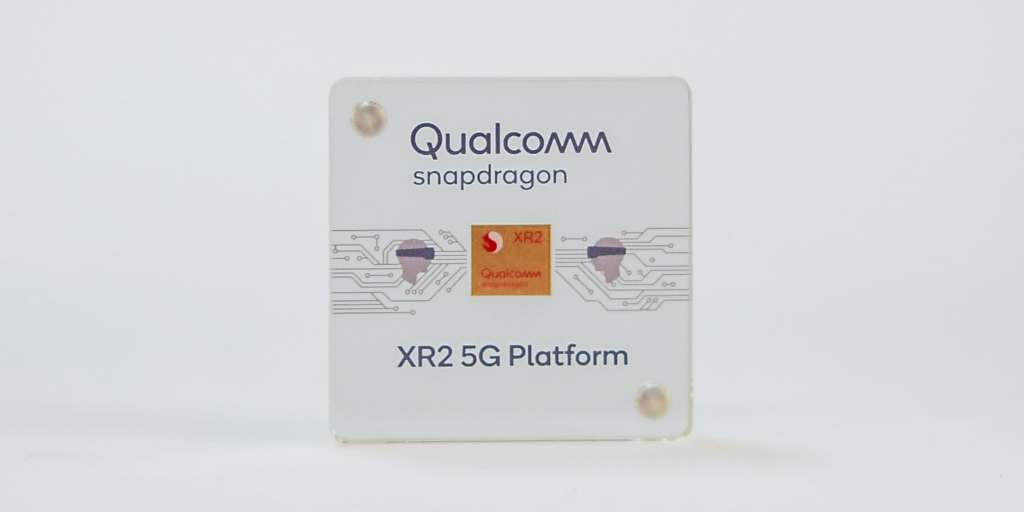 Above: The chip case for the Qualcomm Snapdragon XR2 5G.

The XR2’s performance gain multipliers vary when compared against the XR1, but the improvements from generation to generation are still obvious. For instance, the XR2’s AI engine delivers 15 trillion operations per second (TOPS) compared with 1.8 TOPS in the XR1 and 1.3 TOPS in the Snapdragon 835. That’s an eight times improvement over the XR1 compared with the 11 times gain of the 835. On the other hand, the 835 supported four cameras at once versus XR1’s three and XR2’s seven. And XR2 includes both Wi-Fi 6 and 60GHz 802.11ay support, while XR1 and the 835 were limited to Wi-Fi 5.

It’s worth noting that XR2 customers will have the option of 5G support, but it’s not a mandatory element in the platform: The latest Snapdragon X55 modem can be integrated with the XR2 as needed. Qualcomm expects some devices will use it for “truly boundless XR,” splitting processing between the device and low-latency edge cloud streaming servers to produce photorealistic experiences.

Without naming specific companies, Qualcomm says that multiple OEMs have already committed to selling devices using Snapdragon XR2, while others are evaluating the platform. Based on the Snapdragon 835 and XR1 experiences, the lead time between evaluation and announcement could be a year, which is to say that we might begin to see actual products using the new platform in late 2020 or early 2021. That said, Qualcomm’s Advantage Network is now offering partners access to both reference designs and software packages that may help new entrants get up and running more quickly than before. For more on the Snapdragon XR2 and Qualcomm’s plans, check out our interview with VP Hugo Swart and head of XR product management Hiren Bhinde.