Reinventing Reality, an exhibit aimed at getting girls excited about science and virtual reality, opens today at the Lawrence Hall of Science at the University of California at Berkeley.

The Reinventing Reality interactive science exhibit teaches museum goers how VR works, from the lenses to the sensors and everything else about the technology. Meghan Lee, a seasoned exhibit creator at the Virtual Science Center, developed the exhibit with the help of a founder of modern VR.

Brendan Iribe, cofounder and former CEO of Oculus VR, sponsored the project, with the work starting even before Facebook acquired Oculus in 2014. He knew Lee through efforts to create interactive museum exhibits in the past. Iribe left Oculus/Facebook in October 2018. The whole effort cost about $3.5 million. 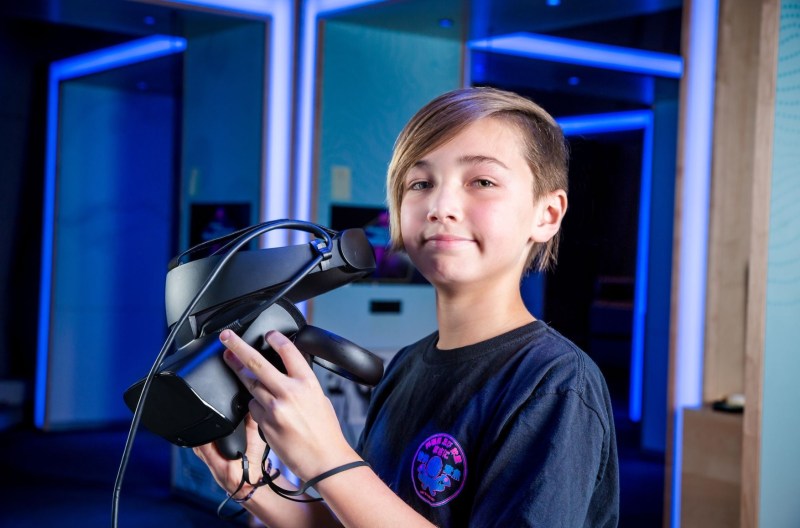 Above: Reinventing Reality is aimed at getting girls interested in STEM.

“When I moved to Silicon Valley, and in 2011, it seemed like there was like a lot of really interesting science going on,” Lee said in an interview with VentureBeat. “But there wasn’t a real good conduit for the public to learn about the science. VR was coming. There were also electric cars and self-driving cars are starting to show up on the road. But I really wondered how kids would learn about this.”

She was struck at how immmersive and mind-blowing VR could be.

“How do we learn about anything in Silicon Valley? And how does this get out to the world?” she asked herself. ”

Lee pitched an idea to Iribe, whom she already knew, and he liked the idea. The focus centered on girls and helping them get excited about VR and STEM (science, technology, engineering, and math) skills. It took several years to prototype and develop the exhibits. The experience designer was Bill Meyer.

“Quite a few museums will bring in VR demos. But no one else is explaining how it works and breaking it apart,” Lee said. “Our exhibits help kids learn about digital models and spatial sound. We have exhibits where you can turn on and off different sensors and cameras understand more about how virtual reality works. And so we’re the first you know, we’re the first to develop content about how it all works.”

Studies have shown the majority of American students have lost interest in science by the 8th grade. And according to a 2017 report from the US Department of Commerce, women are especially at risk for missing out on STEM careers.

In the U.S. currently, women hold only 24% of STEM jobs. Reinventing Reality ignites girls’ interest in science using cutting-edge technology that kids and teens are excited about. The exhibition gives students a chance to interact with virtual and augmented reality, helping them understand how it works and see how they could use it in future careers.

The exhibits were intentionally designed with girls in mind, using nine design attributes that draw and hold girls’ attention while not diminishing boys’ engagement. The design attributes, outlined in the Exploratorium’s 2016 report Exhibit Designs for Girls’ Engagement (EDGE), include using illustrations, images of people, familiar objects, open-ended exploration, and the capacity for group interactions.

“We worked on guidelines about not making it intimidating,” Lee said. “So we use use illustrations for the instructions instead of always just using words. The exhibit is very warm and friendly, and we use a lot of images of people. The main goal is really just to help more students understand and see technology as something that they can participate in and motivate them to go into STEM careers.” 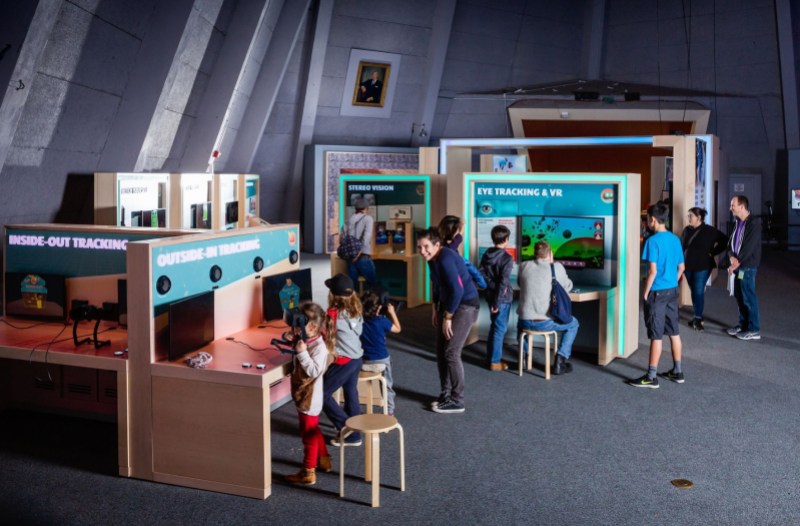 Above: Reinventing Reality exhibit at the Lawrence Hall of Science.

The exhibit is presented in English and Spanish, and uses intuitive experiences to promote collaborative social interactions and meaningful connections. It demystifies the science behind VR and AR with highly interactive and fun exhibits.

Attendees will encounter full-body experiences, such as seeing their body mapped out as a point cloud, trying out the latest eye-tracking technology, experiencing the peculiar sensation of being a virtual body, and becoming immersed in spectacular virtual worlds. Oculus employees, including cofounder and former leader Mike Antonov, helped with the work.

You can buy tickets at The Lawrence Hall of Science. Virtual Science Center is a Silicon Valley-based nonprofit with a mission to be a driving force for STEM education—grabbing visitors’ attention and inspiring future technologists with compelling, hands-on learning experiences.