Whisk, the “smart food platform” acquired by Samsung’s innovation-focused subsidiary Samsung Next earlier this year, is expanding its horizons beyond the B2B realm with a handful of new consumer-focused products spanning the web, mobile apps, and voice platforms.

By way of a brief recap, Whisk was founded out of the U.K. in 2012 by entrepreneur Nick Holzherr, who shot to prominence after appearing on the British version of The Apprentice. In its original guise, Whisk was a consumer-focused app that enabled users to search for recipes, create shopping lists, and buy each of the ingredients online through the app. But in the intervening years, Whisk pivoted to more of a business-focused model, targeting online grocery retailers, publishers, and app developers with various back-end smarts designed to make recipes “shoppable.”

This involves using deep learning and natural language processing (NLP) to build an extensive “food genome” that charts the relationships between, and properties of, ingredients (e.g. categories, nutrition, perishability, and flavor). As a result, Whisk and its brand customers can develop personalized recipes based on user preferences.

In short, Whisk has been trying to do for the culinary realm what Pandora and Spotify have been doing for music recommendations: It’s all about using machine learning to unlock insights from vast swathes of unstructured data. 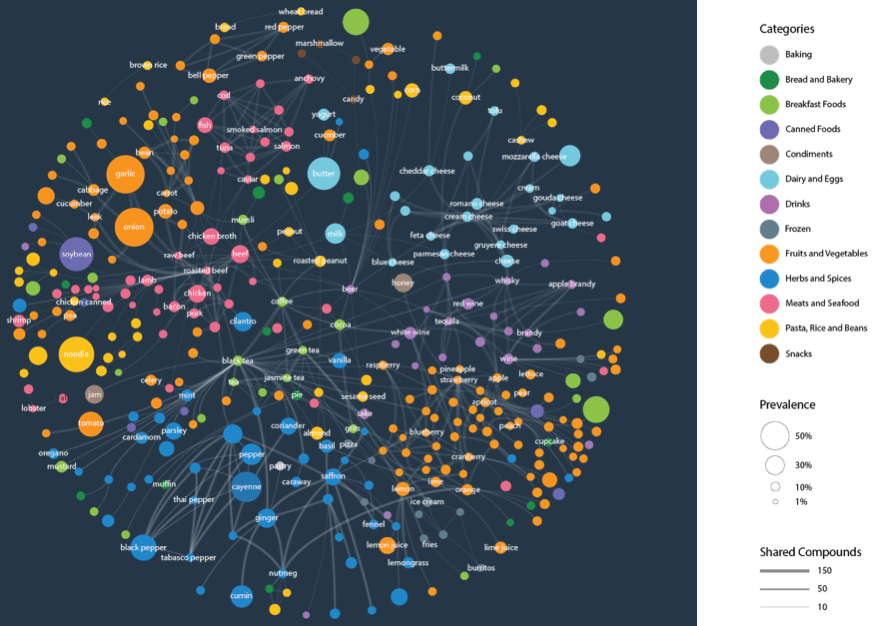 Whisk’s previous consumer-focused apps were only available in the U.K., and with the company’s shift toward B2B, the apps were pushed into the background before being pulled from the various app stores when Samsung Next came a-callin’ back in March.

Following a short beta period, Whisk is today officially unveiling its new cross-platform consumer product lineup, spanning iOS, Android, the web, and Chrome. Additionally, there are voice assistants for Samsung’s own Bixby, Amazon’s Alexa, and Google Assistant that can be used to request recipe instructions verbally, or even to add new ingredients to a shopping list.

It’s worth noting that Whisk is not a recipe publisher or aggregator — you can’t search for new dishes through the app. It’s more a hub that you use to save recipes from other sites, which allows you to create and collaborate around shopping lists.

“We actually think there’s enough publishers out there already that users already love — Google [for example] is often a first port of call,” Holzherr told VentureBeat. 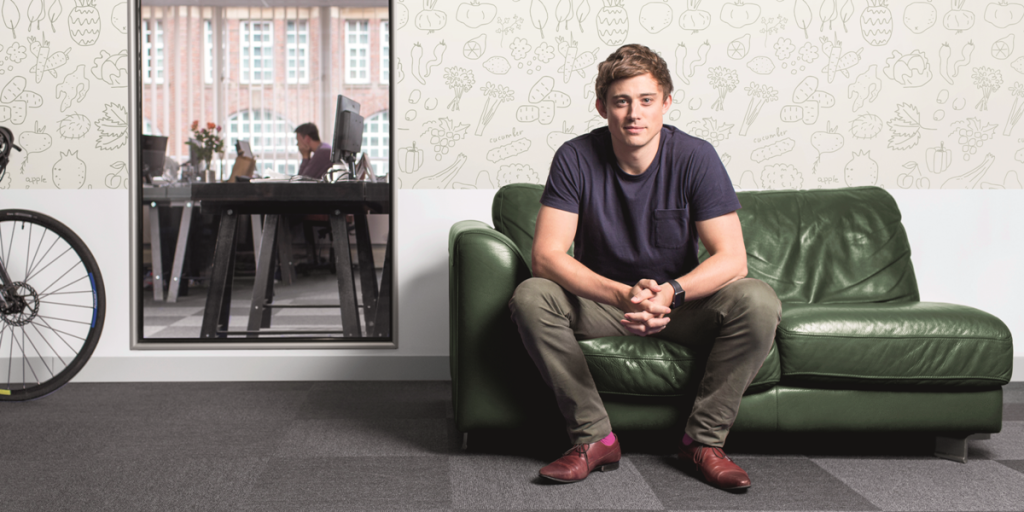 Moreover, Whisk offers a number of smarts under the hood that could help it become one of the most popular apps for foodies out there, particularly if it were to become more deeply ingrained in Samsung’s ecosystem of products.

A typical Whisk use case could be something like this — someone wishing to make a banoffee pie would search for a recipe on Google and click on the first site that looks relevant (say, this one). They would then hit the “share” button and select Whisk from the apps installed on their device, then choose whether to save the recipe or add it directly to a shopping list. 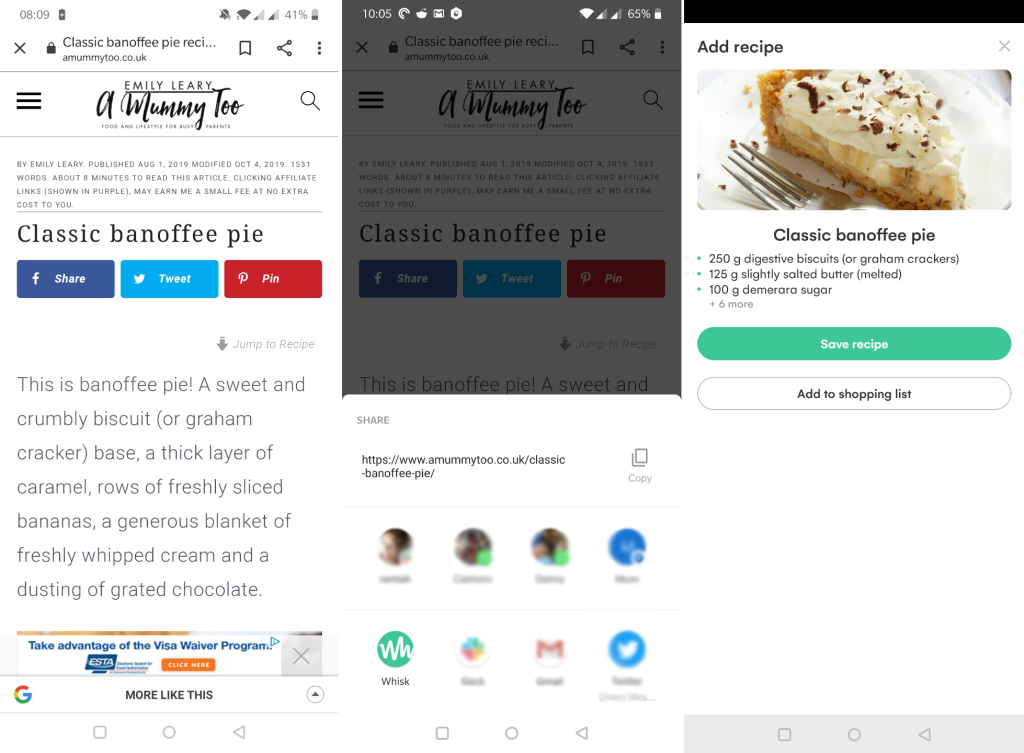 Above: Saving recipes to Whisk

For each recipe, Whisk automatically creates a dedicated Ingredients tab by scanning and pulling the words from the recipe — based on our tests it was 100% accurate in identifying the ingredients.

Whisk can also detect similar items contained within a recipe. For example, if “salted butter” is required both for the base and the creamy banoffee pie topping, it will still list them separately in the ingredients list, but when they’re added to a shopping list it combines them so that the user can see exactly how much of an item they require. 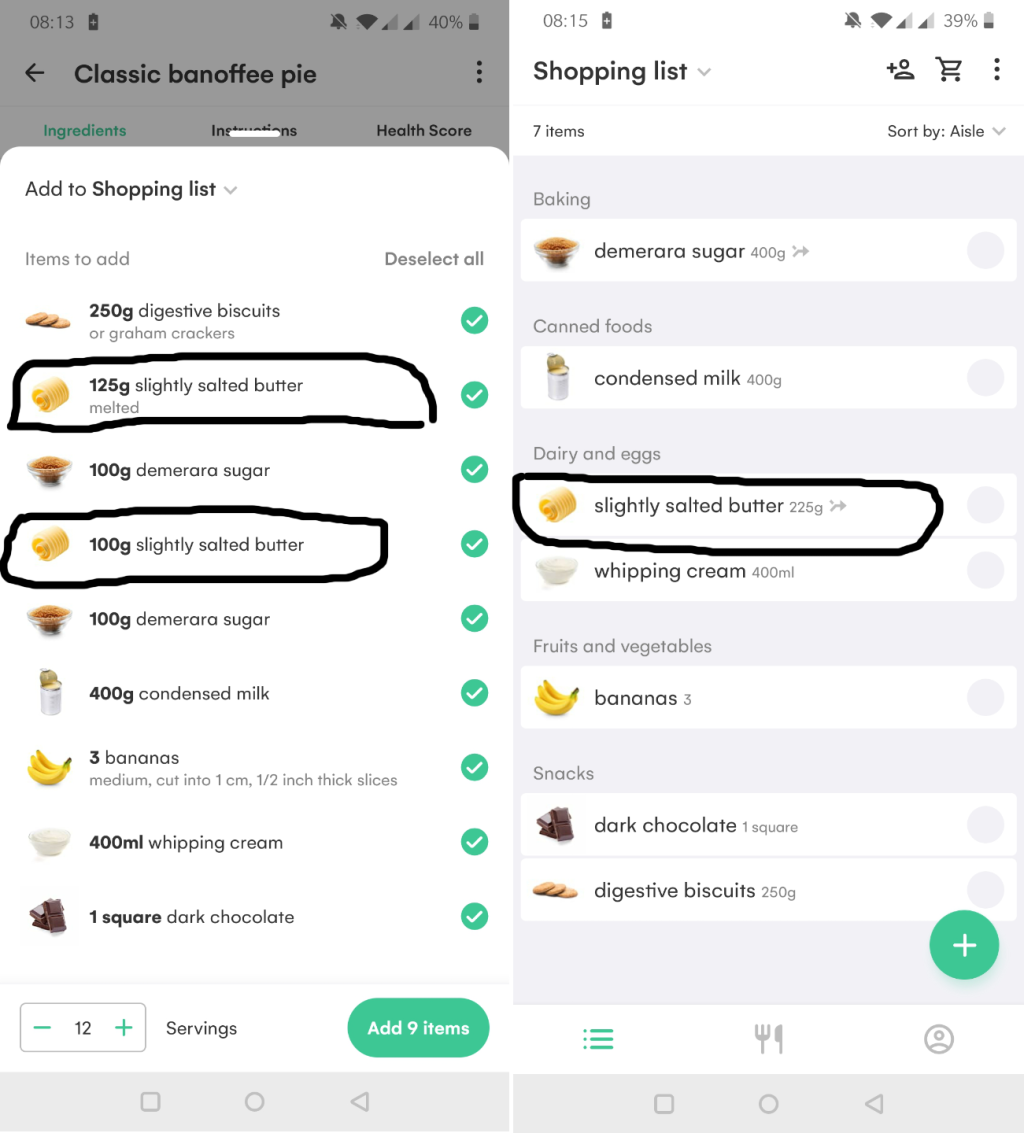 Above: Creating a shopping list from a Whisk recipe

Making recipes shoppable has been a core underlying tenet of the Whisk platform for a while, and now with its own dedicated consumer app in tow it will allow users to shop directly from global grocery retailers globally including Walmart, Amazon Fresh, and Instacart. But being able to sort a shopping list by aisle, as Whisk does, is an incredibly useful feature for those who prefer to shop in-person, as it removes the hassle of having to revisit the same aisle as they walk around ticking items off their shopping list.

For context, nearly one-third of U.S. consumers have purchased groceries online in the past year, according to a recent Valassis report, a figure that will only rise in the coming years. However, the report found that almost three-quarters of consumers who currently buy some groceries online still buy the majority of their groceries in-store. Put simply, the brick-and-mortar grocery market is still top dog, a factor that plays a big part in how Whisk has designed its mobile app.

One of the most useful facets of Whisk lies in its ability to intelligently divide a recipe into its core components. Next to the dedicated ingredients tab, Whisk splits out the instructions too, though this isn’t without its flaws. Online recipes often come with a meandering preamable — background context on the dish that some may find interesting, but ultimately is of little use to those simply looking to recreate a dish. As such, Whisk would be better if it stripped out all the junk words and focused on the information that matters — the instructions.

Indeed, not only does the instructions tab retain all the unnecessary introductory text, but it also needlessly includes the ingredients (which already have their own tab), meaning you have to scroll down quite far just to get to the instructions. 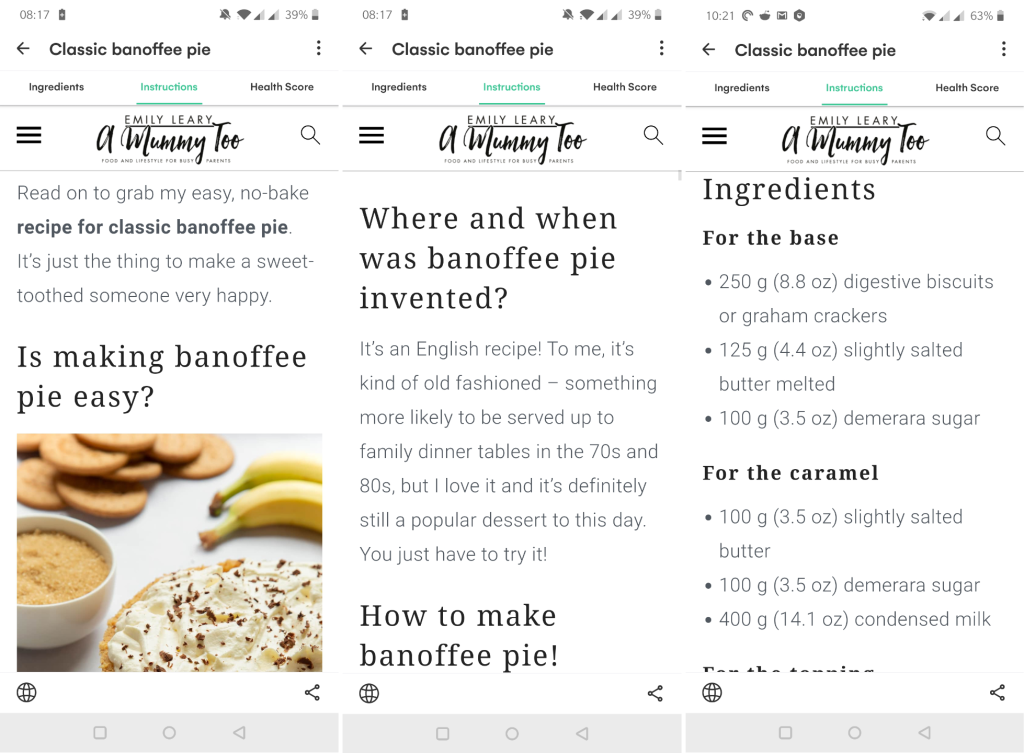 Above: Recipe instructions in Whisk

One of the standout elements of the Whisk app is how it automatically creates a nutritional breakdown per serving, as well as an overall health score based on the ingredients. And this is where Whisk’s intelligent food engine proves especially useful. “We really understand all the ingredients and we know the ontology of the food genome — we know the nutritional aspect of every single ingredient and the amount you’re using,” Holzherr said.

It turns out banoffee pie isn’t the healthiest dessert on the planet. 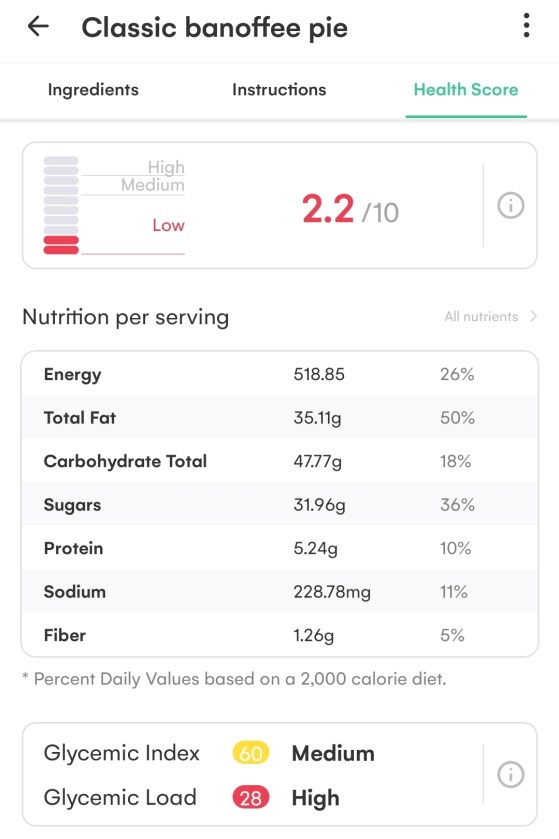 Perhaps the final key feature worth highlighting in the new Whisk app is its collaborative elements. Shopping lists can be shared with anyone, though they will need to create a Whisk account if they want to edit a list. 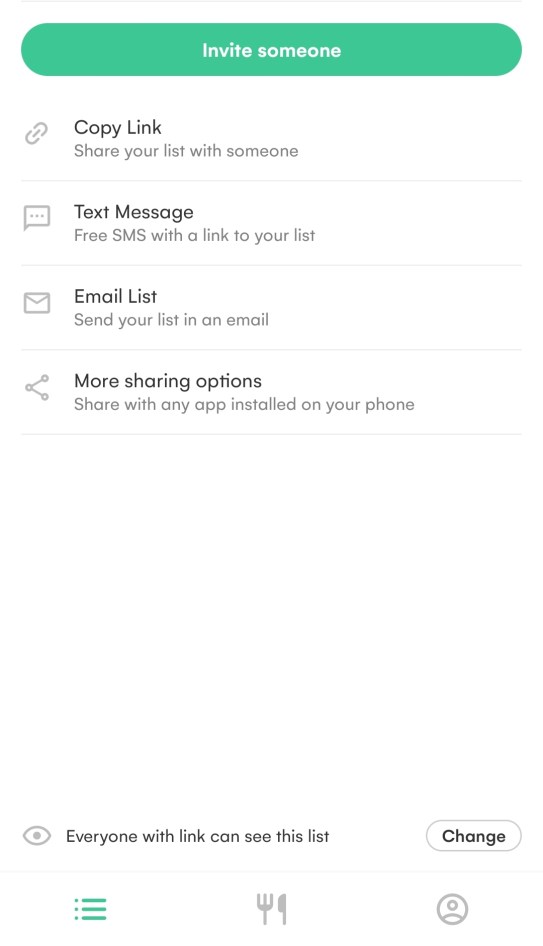 Above: Sharing shopping lists in Whisk

Moreover, many people like to share recipes with each over WhatsApp or SMS, and Whisk caters to such scenarios. The user simply copies the text from the message to their clipboard, and then pastes the ingredients into a new recipe inside Whisk, which then recreates the individual items in an easy-to-follow list.

One key feature that’s missing from the launch product is the ability to snap a photo from a recipe book, with Whisk importing all the ingredients and instructions using optical character recognition (OCR) — we’re told that this is something that is likely coming further down the road.

At its core, Whisk is trying to make it easier for consumers to not only bookmark recipes they find online, but make it easier to do something with them. For those who do like to shop on the internet, Whisk links in directly with more than 30 online grocery retailers. Those who prefer to visit stores in person, they are equally catered for.

“Over half of the U.S. population still makes shopping lists using pen and paper, yet most people are looking for food inspiration digitally,” Holzherr said. “Hours are spent looking for food content online — seeking new and healthier meals. However, the data shows people generally end up cooking the same 7-9 dishes on repeat. There’s a fundamental disconnect between the online and offline that Whisk can help connect.”

Other companies have set out to achieve similar things to Whisk. Redwood City-based Yummly raised north of $24 million from big-name backers such as Intel before it was snapped up by home appliance giant Whirlpool back in 2017. And this helps to highlight how these kinds of startup are perhaps better suited to being part of a larger corporate structure, as it gives them easier access to resources and deeper integrations into the smart home.

Indeed, Whisk’s latest expansion could ultimately play a big part in Samsung’s burgeoning connected kitchen play. Samsung and Whisk first partnered back in 2016 when the Korean tech titan launched its internet-enabled Family Hub fridge — Whisk was brought on board to help serve personalized recipe recommendations. And with CES 2020 just a few weeks away, an event where Samsung typically unveils numerous smart kitchen products, don’t be surprised if Whisk plays a starring role.