Ghostery, a popular privacy- and security-focused browser extension and mobile browser app, has officially launched for desktop users. The New York-based company announced a pilot program for Ghostery Midnight in late October, and the subscription-based desktop app is now ready for prime time. Ghostery Midnight comes with a slew of features to protect users at the device level across all applications — including an ad blocker, tracker protection, and monitoring, and — for the very first time in a Ghostery product — a virtual private network (VPN).

While this launch is an indication of Ghostery’s efforts to build a sustainable business model, it also signals changes in the browser landscape that have necessitated a shift to device-level protection. Google, in particular, has proposed major changes (“Manifest V3“) that would impact how third-party extensions work inside Chrome and Chromium-based browsers, sparking complaints that it will become much more difficult for ad blockers and privacy-protection tools to dynamically respond to threats at the browser level.

According to Ghostery, it was already internally discussing a device-level privacy product before Google’s new Chrome proposals came to light, but the news may have expedited Ghostery Midnight’s launch.

“Tracker protection in Ghostery Midnight works very similarly to our extension by detecting and blocking trackers from third-party companies, but this time at the device level,” Ghostery president Jeremy Tillman told VentureBeat. “Midnight monitors network activity on an app-by-app basis, needing only access to standard permissions in the operating system used by similar applications.”

New York-based Ghostery came to life back in 2008 as a FireFox add-on that analyzes web pages for trackers. In 2010, Ghostery was acquired by behavioral advertising regulatory platform Better Advertising, which introduced the Ghostery extension to all the major browsers, followed later by a dedicated mobile browser app.

Although Ghostery has garnered some high-profile fans over the years, including U.S. whistleblower Edward Snowden, it has also courted skepticism for inviting users to opt into sharing tracker-related data that it then sold to other companies. This business model was seen as problematic, given that Ghostery is built around privacy. So in 2017 Ghostery sold its trademark and main consumer technology to Cliqz, a Mozilla-backed privacy-focused browser company based in Germany that later made Ghostery open source and announced a new business model.

For the past year or so, Ghostery has operated two new moneymaking schemes in beta. Ghostery Rewards is an opt-in feature that notifies users about deals or special offers relevant to a site they’re on — it’s basically affiliate marketing, with Ghostery taking a cut of any sales it generates. Then there’s Ghostery Insights, priced at $49 per month, which provides real-time web tracker analysis data for businesses. Back in January, Ghostery introduced its first consumer subscription plan in the form of Ghostery Plus, ushering in advanced features such as in-depth insights around trackers, priority support, and new themes for $2 per month.

Ghostery Midnight builds on this with the introduction of a new premium subscription plan that costs $14 per month. It’s worth noting that the service comes with a basic tier that protects up to two browsers for free.

“For years, we at Ghostery have been focused on protecting users and their data on the browser,” Tillman said. “However, with impending changes in the browser landscape and privacy threats expanding at a device level, we’re excited to debut Ghostery Midnight, featuring app-level tracker-blocking capabilities and our first ever VPN so users can feel protected at every level.”

Through the main Ghostery Midnight control panel, users can activate and deactivate the various features that work to protect the entire desktop. This includes a VPN, a tracker blocker, and an ad blocker, with additional “quick stats” showing how many tracker requests have been blocked. 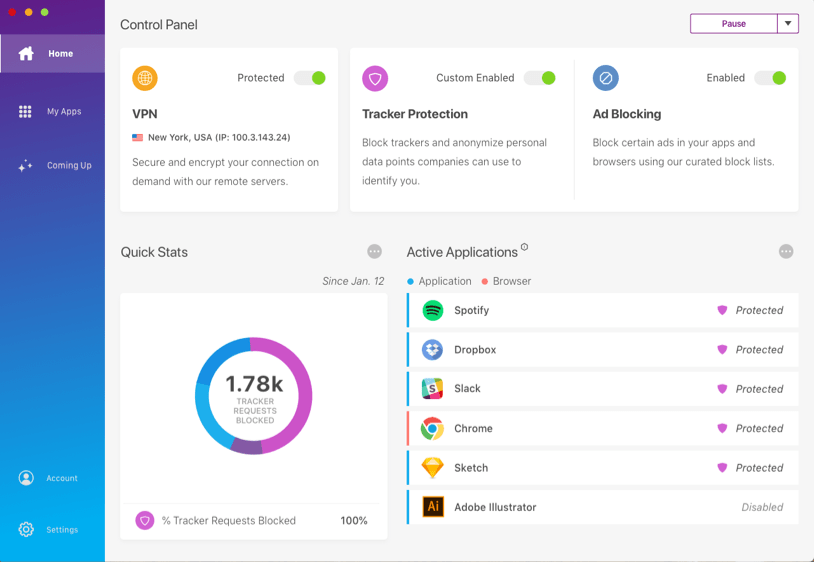 Users can click on each desktop application to see what trackers are at play and which have been blocked. 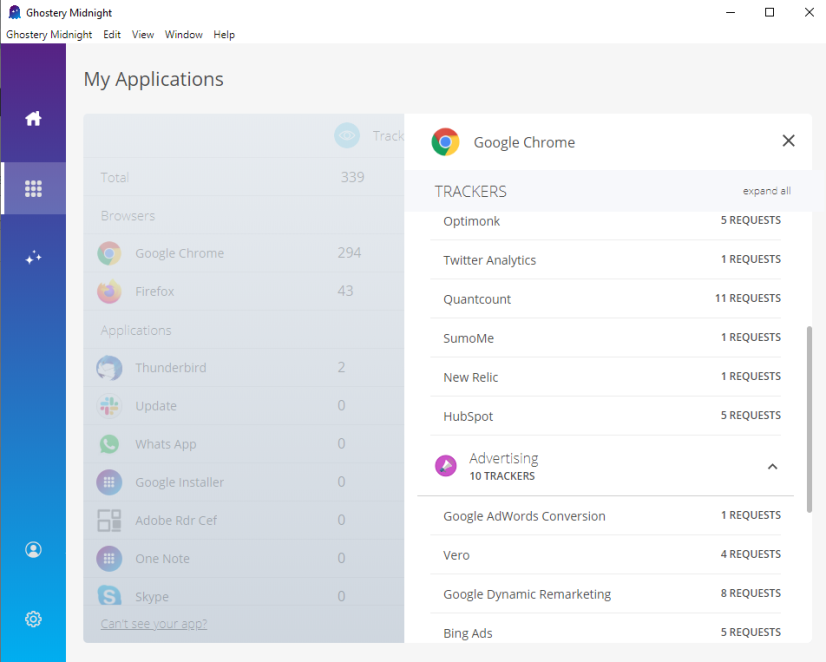 Above: Ghostery working with Chrome at the device level (Windows) 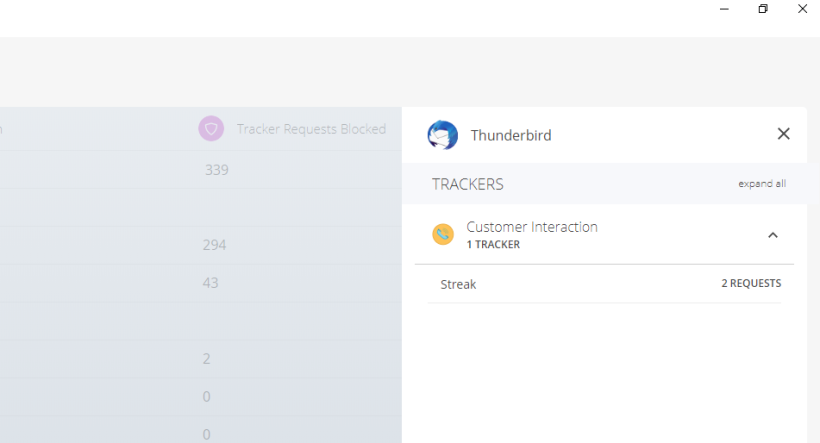 Above: Ghostery detecting trackers inside Thunderbird

The VPN offers six separate IP regions  — two in the U.S. and individual ones for the U.K., Canada, Germany, and Singapore.

If the user needs to temporarily deactivate their various blocking tools, they can choose to do so for 30 minutes, one hour, or 24 hours without having to manually turn off the features individually. 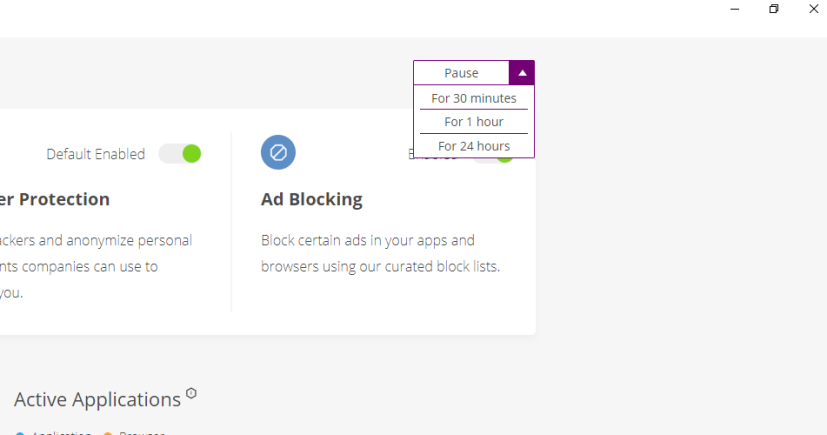 While cookies have served as an effective way of tracking users since the dawn of the modern web, they are easy to spot and block, which is why advertisers and various nefarious entities have sought new ways to identify and track users across websites. One such mechanism is “fingerprinting,” which works independently of cookies and allows advertisers (or anyone) to build a picture of an individual’s browsing habits by monitoring signals such as the time zone of a machine, the screen resolution, HTTP headers, and more.

Unlike cookies, fingerprinting is more difficult to spot, and anti-tracking tools typically feed from a database of known trackers. Ghostery maintains a proprietary tracker database that is updated regularly to detect and block trackers, and the company will leverage this same database for Ghostery Midnight.

However, the Ghostery browser extension also uses more advanced anti-tracking technology that leans on machine learning to spot new or otherwise unknown trackers that have yet to be added to any database. This isn’t yet available inside Ghostery Midnight, but it will be thrown into the mix sometime next year.

“As everyday digital users, we’re incredibly vulnerable,” Tillman added. “Today’s websites have dozens, if not hundreds of tracking technologies built into them. And, increasingly, modern desktop applications are using the same technologies to extend the reach of third-party tracking beyond your browser to include everything else you do on your device. This allows big tech companies like Google and Facebook, not to mention hundreds of smaller ones, to cast a bigger net to collect and monetize our data.”

Ghostery Midnight is available to download now and comes with a free seven-day trial.