Watching a Cafe X robot prepare a cup of gourmet coffee — and then perform a kind of ritualistic dance — is kind of mesmerizing. I did just that when the San Francisco company opened a new location at the San Jose International Airport.

Tucked away in the Southwest expansion wing (gates 31 to 36) in Terminal B, the Cafe X Robotic Coffee Bar is kind of hidden. But it’s at an airport that serves more than 15 million passengers annually, with 450 peak daily departures and arrivals. Cafe X CEO and founder Henry Hu thinks it will get a good reaction. The company is opening its fifth location at San Francisco’s airport on Monday.

In an interview with VentureBeat, Hu said, “We’re able to produce any kind of beverage, basically. It can make anything that fits into our category, like a hot or a cold brew, as you wish. When it isn’t busy, it dances. It’s always moving.”

The company is doing its best to demonstrate that its robotic arm can beat a Starbucks human barista. The company gets its California-roasted coffee beans from famous roasters such as Ritual Coffee, Equator Coffees, and Intelligentsia Coffee. Premium options include Japanese matcha, Oatly (Swedish oatmilk), and organic milk from Clover Sonoma. Cafe X will also be offering Instagram-famous pastries from Third Culture Bakery, creators of the Mochi Muffin and Butter Mochi Donuts. The robot can make other drinks too, like nitrogen-infused lemonade. 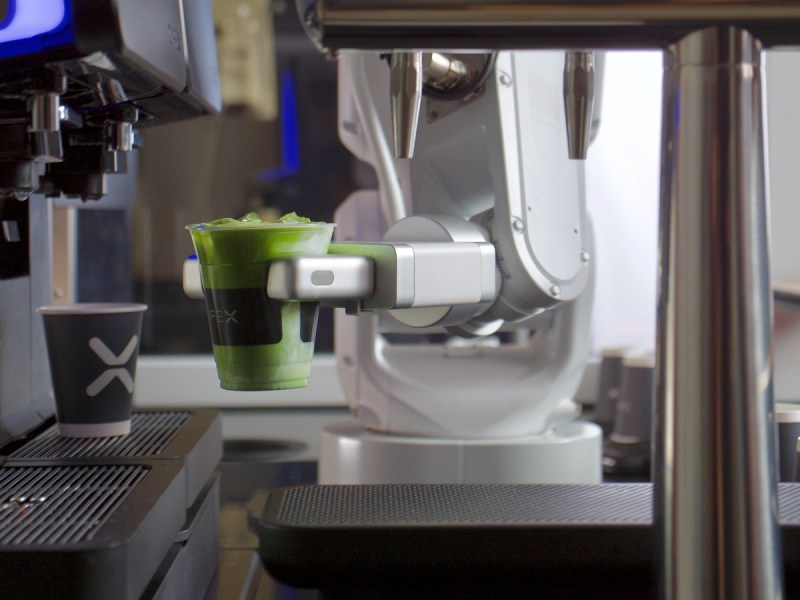 Above: Cafe X’s robot can make all kinds of coffee and tea drinks.

Hu got the idea of a robot making coffee after he waited over 30 minutes for coffee at an airport a few years ago. Now he wants to entertain guests with good coffee served up by a dancing robot barista.

The Robotic Coffee Bar was designed and engineered with the insight and operational expertise gleaned from running three prototype machines in San Francisco since 2017 and serving hundreds of thousands of customers. The design is meant to be welcoming, with modern user interfaces, chill hip-hop beats, and the dancing robot to create a familiar, yet futuristic specialty coffee experience.

You can’t reach inside and do any real damage to the robot by grabbing its arm. At least, not easily. There are cameras in the airport, and when the robot puts a cup of coffee into a serving tray, it’s kind of like an airlock. It puts in the coffee, and an interior glass door closes. Then the exterior door opens and you can grab the coffee. This helps protect the robot and the inside of the bar.

While you could say it’s eliminating a human barista, Hu said the company is also creating jobs. It has programmers and robot experts, and each of its four existing robot bars has an attendant, who can help you with your orders, which you make via a smartphone or the tablet kiosks.

“The attendant can make sure you have a good experience and talk about the quality of the coffee in more depth,” Hu said.

Is this going to kill a lot of jobs? 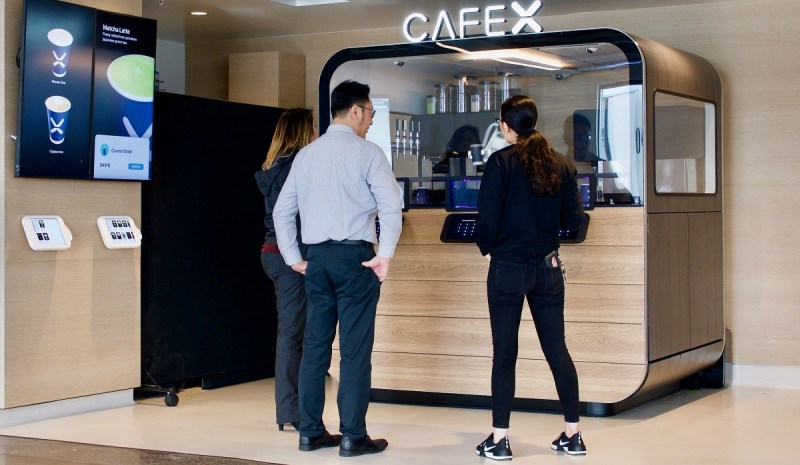 Above: Cafe X at the San Jose airport.

Hu doesn’t think robotic baristas are going to kill a lot of jobs.

“Not only are we creating more interesting, less stressful, less physically demanding jobs for the retail worker, we also have this whole company that is engineering, designing, and manufacturing things,” Hu said.

Cafe X has more than 40 employees now, and it has raised about $15 million.

“The jobs lead to a better quality of life,” Hu said.

About 50% to 60% of the people that come into the store every day are repeat customers.

John Aitken, San Jose airport director of aviation, said in a statement that the Cafe X location will complement the high-tech airport and the techie travelers in the region. Coffee is the most-requested concession in the new area, he said. And while Cafe X is currently open from 5:30 a.m. to 10:30 p.m., it will soon be operating 24/7, so workers or travelers can order coffee at any time. Try getting a human barista to work those hours. 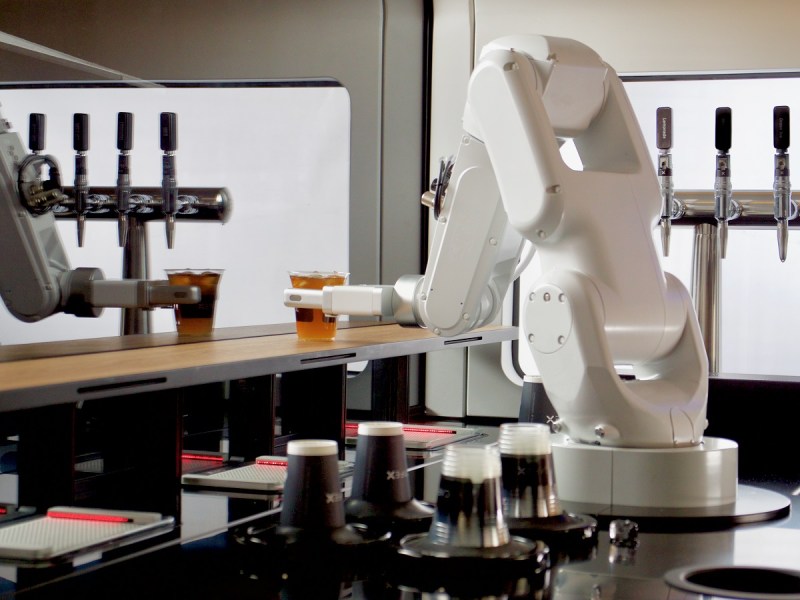 Above: Cafe X robot arm can produce a lot of coffee.

When I watched the robot work, it messed up a couple of times because it had the wrong kind of grip. Hu ordered a new one so that it would grasp the cups better. But it was cool to see the robot do complicated tasks, like dispensing the coffee, adding foam, picking up the cup and letting it cool down on the counter, and then placing it in the box for the customer to grab. When the robot moves the cup, it tilts it a little so it can move quickly without spilling any liquid. That’s pretty precise, Hu said.

The robot will also weigh ice when it fills a cup with ice. If it needs more weight, it will add more ice.

So far, the robot isn’t really thinking, as it doesn’t incorporate machine learning. Rather, it’s hard-coded to do specific tasks.

“AI might be necessary when it reaches a certain capacity for production and you want to squeeze more efficiency out of it,” Hu said. “But that hasn’t been necessary so far.”

Hu said that Cafe X could eventually undertake more complicated tasks, like possibly cooking hot foods or more. That’s a matter of programming for the robot, as the bar itself has been designed to accommodate such cooking. But it’s going to be a long time before Cafe X can have as many locations as Starbucks, which has more than 28,000 stores.

“If we built a thousand machines a year, it would take more than 20 years to catch up,” Hu said.

I got a mocha with oat milk, and it was pretty good. I couldn’t tell it apart from a Starbucks mocha, except the Cafe X coffee tasted a little better.