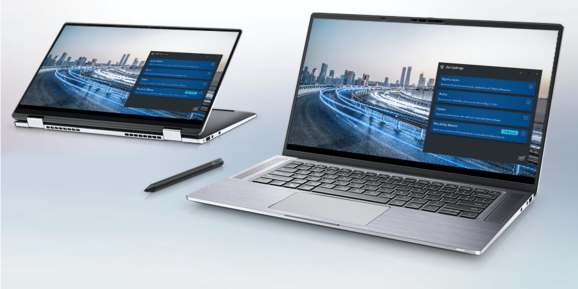 Ahead of next week’s CES 2020 in Las Vegas, Dell today announced two PC updates that will improve its appeal to mobile device users: It’s officially making a laptop with built-in 5G cellular capabilities and is expanding its Mobile Connect app to support iPhone screen mirroring and wireless transfers.

Made from aluminum, Dell’s new Latitude 9510 includes a 15-inch 1080p screen, Intel UHD Graphics, Wi-Fi 6 (802.11ax) support, and an integrated fingerprint scanner, as well as what the company describes as “built-in AI” to manage battery life and improve application loading performance using machine learning. One version of the 9510 will be a traditional clamshell design, while another will have a hinge that converts to a tablet form factor with active pen support.

Some of the optional upgrades include a Core i7-class 10th-generation Intel CPU (Comet Lake), a 1TB SSD, and a Smart Card reader. If you forego the reader, the machine can include an 87-watt battery with promised 30-hour battery life, but with the reader, it drops to a 52-watt cell with 17 promised hours of run time.

Inside, the Latitude 9510 has been engineered with 5G capabilities — a surprise, given that it’s running on an Intel processor. While Intel recently announced that it partnered with MediaTek to offer 5G modems for Core i-series laptops, and named Dell as one of the earliest customers for the Intel-MediaTek 5G solution, it said its first 5G laptops were coming in “early 2021.” Instead, Dell will offer Qualcomm’s Snapdragon X20 modem as a 4G option, with the faster Snapdragon X55 for 5G starting in July.

Using antennas integrated into its speakers, the Latitude 9510 promises to connect to sub-6GHz 5G networks, but not the high band millimeter wave towers deployed by top U.S. carriers. As of now, Sprint operates a mid band 5G network with 500-700Mbps peak speeds in a handful of U.S. states, while T-Mobile and AT&T are offering slower, low band 5G networks with 200-300Mbps peaks in some areas. Verizon is not yet offering sub-6GHz 5G service. We’ll have to see how much appeal Dell’s approach has when the machines’ first versions launch on March 26; pricing starts at $1,799, with no prices yet for the modem options.

Dell also announced today that a spring update to its Mobile Connect software will enable some of its computers to mirror the screens of iOS devices, including iPhones, as well as wirelessly transferring files and photographs directly between Apple and Dell machines. While the update will bring parity of those features to iOS after previously supporting them for some Android phones, that’s historically not been easy to accomplish with iPhones and iPads, due to Apple integration limitations, which will potentially give supported Dell machines a leg up on other Windows laptops.