If you’re in the market for a new fridge, no need to fret — Samsung’s got you covered. This morning, ahead of the 2020 Consumer Electronics Show (CES), the tech giant debuted the latest addition to its Family Hub refrigeration lineup, which features improved AI as well as meal-planning features and better synergy with Samsung smartphones, TVs, and mobile devices.

The new Family Hub refrigerator boasts AI-powered ViewInside cameras that automatically scan products, identify them, and send updates when new ones are added or old ones are depleted. They’re designed to work in tandem with the new Smart Recipes functionality, which serves up suggestions and shopping lists based on dietary preferences, and novel meal-planning features powered by Whisk (which Samsung acquired in March 2019) that adjust recipes based on the number of people expected.

Samsung first demoed in-fridge computer vision last January at CES 2019, where it suggested that Bixby Vision — technology that’s been around in some form since 2016 — might someday automatically labels groceries in-fridge, eliminating the need for users to do so manually. For its part, Smarter took an aftermarket approach with FridgeCam, a wireless camera that’s able to tell when food is about to expire or when you might be running low on groceries. 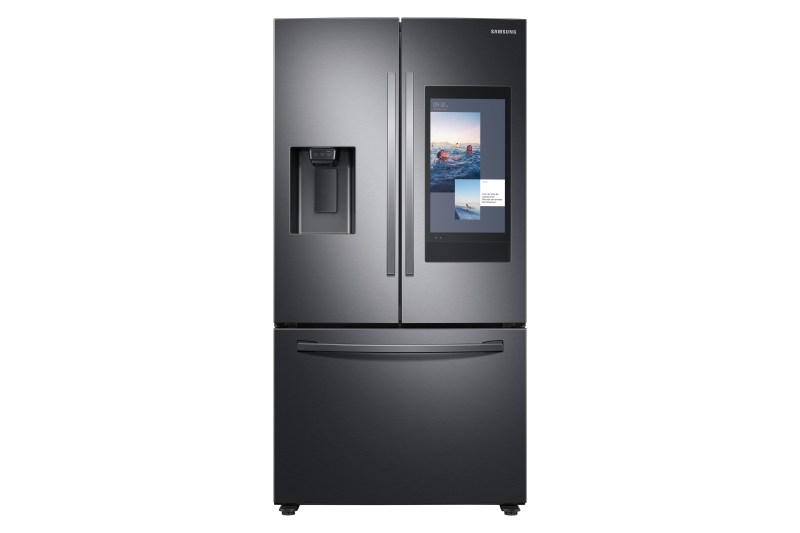 Of course, it’s worth noting that LG’s second-generation InstaView ThinQ fridges also AI-equipped cameras that can identify food. They made their debut this week and are slated to begin shipping sometime in 2020.

In related news, this year’s Family Hub fridge supports video clips and half a dozen streaming music services via its touchscreen-enabled bulletin board, enabling family members to beam almost any content from their smartphones. It also ships with an updated SmartView feature, which mirrors connected Samsung TVs and Samsung mobile devices in portrait or landscape orientation.

Lastly, smart home device controls are improved thanks to the addition of SmartThings Video, which lets users view multiple security cameras at a glance. As before, the Family Hub refrigerator can monitor and control over 1,000 SmartThings-compatible products, which is nothing to shake a stick at considering the number of monthly active SmartThings users surpassed 45 million in October.

For the uninitiated, SmartThings spans routers, sensors, TVs, and more thanks to the launch last year of Samsung’s SmartThings Cloud, which lets users control compatible IoT devices from a single app. (Samsung says that over 10 million homes in the more than 100 countries where SmartThings is available are connected to SmartThings Cloud.) It’s Samsung’s play for a ballooning IoT segment that shows no sign of slowing down — according to IDC, 41.6 billion devices will be connected to the internet by 2025.

“In the five years since we launched Family Hub, we have introduced innovations that reflect the new ways that busy, modern families are managing their daily lives,” said Samsung general manager of home appliances John Herrington in a statement. “The latest Family Hub is the most innovative yet, with more personalized, intelligent features that enable busy families to stay better connected to one another.”

If history is any indication, the new Family Hub won’t come cheap — the last-gen model ran around $3,000 and over. But considering the household refrigerators market is anticipated to be worth $125.7 billion by 2025, there’s bound to be deep-pocketed buyers keen on picking some up.