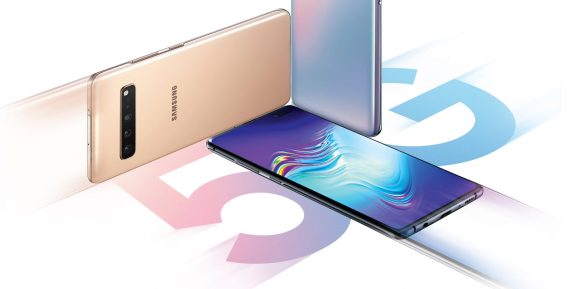 We’ve come to expect occasional middle-of-the night announcements from South Korean electronics giant Samsung, which sometimes shares news as its North American customers are headed to bed. Last night, the company crowed that it shipped over 6.7 million 5G phones across the globe last year, and casually confirmed that it will be releasing the “world’s first 5G tablet” — the Galaxy Tab S6 5G — this calendar quarter in Korea. Sleepy-eyed readers might have missed the latter detail, but the message was clear: Samsung ended 2019 as the world’s leader in the nascent consumer 5G market, and it’s prepared to move forward in 2020.

I don’t want to overinflate the importance of shipping 6.7 million phones in a year. To its credit, Samsung’s announcement didn’t hide that only 1% of all smartphones sold in 2019 were 5G, and noted that it captured 53.9% of that tiny sliver of 5G smartphone sales. Another way to look at this: Samsung’s global 5G share accounted for just over 0.5% of smartphones last year — a drop in the bucket.

But that’s better than the company’s earlier sales estimates, and it’s a good position to start in for 2020. Regardless of the carrier store one visits in the United States, it’s impossible to miss Samsung’s 5G phones, which for AT&T are literally the only available options for consumers today. With other carriers, Samsung’s phones are just the nicest of multiple options, wholly occupying “premium flagship” 5G spaces that Apple would normally have shared.

That’s likely to continue for the next two or three full quarters. Samsung’s five existing 5G devices equal five more than Apple has on the market, or is likely to have until much later this year. By that point, Samsung will also have at least one 5G tablet and a new round of Galaxy S-series phones in stores, quite likely a new hybrid Fold, and additional 5G Note models en route. “2020 will be the year of Galaxy 5G,” Samsung head of mobile research and development T.M. Roh said, “and we are excited to bring 5G to even more device categories and introduce people to mobile experiences they never thought possible.”

While the prospect of unimagined experiences sounds nice, I’m not holding my breath for Samsung to deliver a magical-class breakthrough this year, and it remains to be seen whether customers will get excited over 5G devices that are just faster versions of existing 4G products. Last year, the Galaxy Fold 5G was quietly (and only regionally) released as a footnote to the Galaxy Fold. Similarly, the Galaxy Tab S6 5G merely promises to add superior streaming and downloading speeds to an existing product — one that’s not exactly the leader in its category. Judged strictly by sales, Apple’s iPads dominate the tablet space, and may continue to do so this year even without a 5G option; unlike 2012, where the iPad became 4G capable months before the iPhone, Apple is believed to be prioritizing 5G in iPhones first this cycle.

Samsung will be holding a press conference at CES on Monday, and while it’s highly unlikely that the company will show its new Galaxy S-series phones there, there will certainly be some 5G news worth watching. A separate “Age of Experience” press release yesterday referenced an “intelligent companion” and hinted at possible augmented reality news, as well. VentureBeat will be attending the event in person to share the news and first hands-on impressions with you, so stay tuned for what’s sure to be an interesting week ahead.