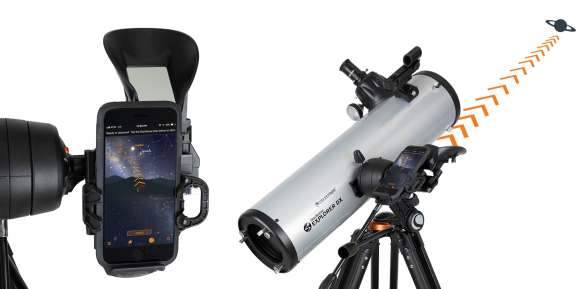 If you’ve ever tried to map distant stars or planets using a smartphone or tablet app, you know the apps have been pretty amazing for years but are constrained by the devices’ tiny, light-limited cameras. Now Celestron is leveraging its six decades of telescope-making expertise to let novices enjoy the “sophisticated sky recognition technology used by professional observatories,” combining a modern telescope with an Android phone and iPhone dock.

The StarSense Explorer series includes four models, ranging from $180 LT 80mm refractor and 114mm reflector telescopes to larger $400 DX 102mm refractor and 130mm reflector telescopes with better light-gathering purposes and bigger tripods. In each case, users simply position the phone in a dock on the telescope’s right side, launch the StarSense Explorer app — compatible with Android 7.1.2 or later, and iPhone 6 or newer phones — and use on-screen arrows to move the telescope on its tripod, quickly and automatically locating objects in the sky.

Key to the process is an AI solution that, like facial recognition, uses known star patterns to identify the portion of the sky it’s looking at. Users can choose a celestial object in the app’s database, wait for an on-screen crosshair to glow green, and then look into the telescope’s eyepiece to see it live.

For users accustomed to fully app-based solutions, where constellations and planets are represented digitally, using a telescope to view the real night sky will be an eye-opening experience. Similarly, users who previously hunted for stars using telescopes without apps often found the process difficult or boring. Pairing a real telescope’s superior optics with the StarSense Explorer app’s celestial reference guide delivers a new STEM-focused learning experience that will likely appeal to schools and amateur observers.

Unlike aftermarket accessories and some prior Celestron models, no Wi-Fi or cellular data connection is needed for the StarSense Explorer telescopes to function properly. Dicey Wi-Fi was the chief complaint about the company’s earlier Astro Fi telescopes, which retailed for similar prices and used a dockless, wireless interface with phones and tablets. All four of the StarSense Explorer models are shipping now.